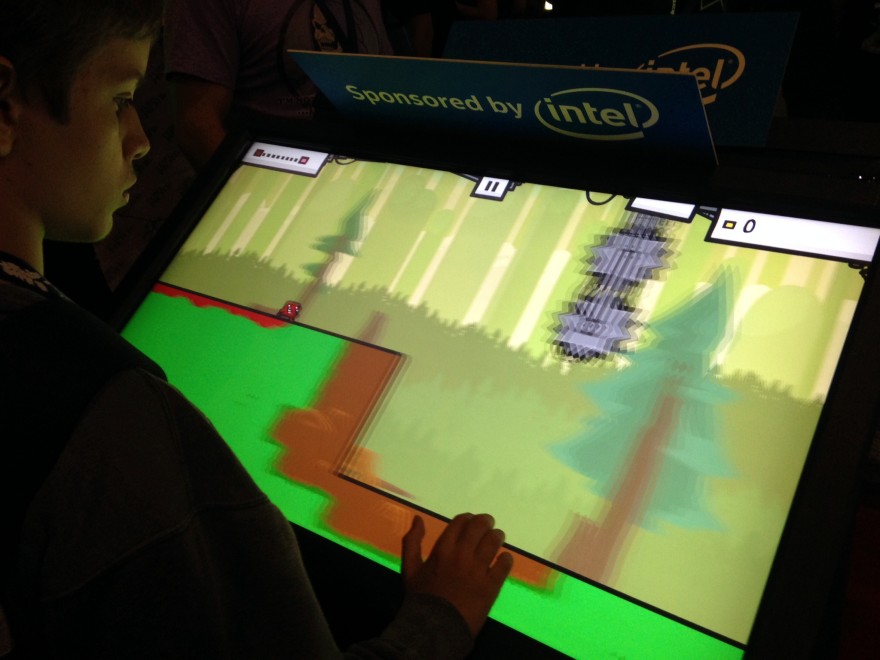 On August 19th, wunderkind duo Team Meat announced they would be unveiling a new game at PAX Prime 2014 called A Voyeur for September. This was surprising for two reasons: first, everyone assumed Team Meat would be showing up with Mew-Genics, their mad scientist/cat lady simulator. Second, this new project claimed to be a “live-action stealth game,” its announcement accompanied by a 55 second video that looked like it took even less time to shoot and edit.

Immediately after the teaser was released, the internet figured out that A Voyeur for September was an anagram for Super Meat Boy Forever. And while reactionary gaming rumors are largely bunk, this one was on the money.

Just outside the Indie Megabooth at PAX Prime, Team Meat is currently showing off Super Meat Boy Forever, a sequel to the seminal 2010 hit Super Meat Boy. The sequel brings back all the now-classic tropes of the Meat Boy universe. The most important difference is that Forever is being developed primarily for tablets. (It’ll also appear on Steam.)

“In two ways it’s a challenge,” says Tommy Refenes of Team Meat. “Can we make Meat Boy on a tablet? And can we make a game on a tablet that feels like a full game, not a one-off app that you download for free and forget about.”

What’s most striking about playing Super Meat Boy Forever on a tablet is how clean and organic it feels.

For Refenes and co-developer Edmund McMillen, meeting that challenge meant maintaining the mechanics and aesthetic that made Super Meat Boy so addictive, while taking advantage of gameplay only a tablet can offer. In other words: a game that flows like a one-button Super Meat Boy.

The result looks to be exactly that. The two levels made available on the PAX floor (one Light World, one Dark World) show off the new side scrolling, endless runner in the vein of Bit.Trip Run and Temple Run. Players touch and swipe their way over and under buzzsaws, up vertical shafts, and across giant chasms. Even though moving to tablets promises a wider audience, one potentially comprised of players both younger and older than the average Super Meat Boy pro, Team Meat definitely didn’t soften up the difficulty. I probably died 50 times before giving up on the first level.

What’s most striking about playing Super Meat Boy Forever on a tablet is how clean and organic it feels. There are no buttons on the screen to mash, no busy map or score counter. The primary colors of the Super Meat Boy universe really pop. It’s almost as if it was meant to be played on touchscreen.

“My personal problem with a lot of iOS games is you’re trying to smash a square peg into a round hole,” says Refenes. “You should design for the platform. You should design to the strengths of what you’re making.

In terms of size, Team Meat plans to make SMBF comparable to the original, with expected features such as daily challenges “to keep people coming back.” No official release date has been announced yet.