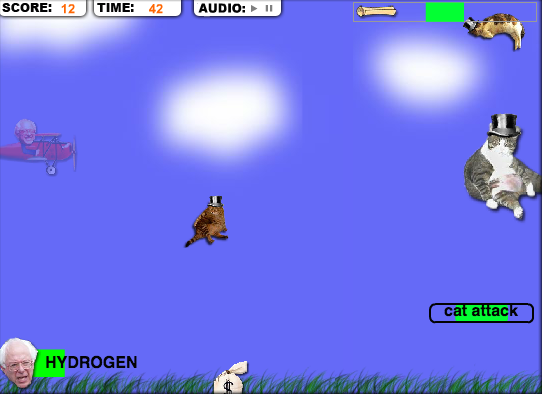 a sentient dad joke who can play his part in memes

The optimal context for Bernie Sanders’ content is the Internet Archive’s “Way Back Machine,” a digital place in which everything takes on the quality of recent history. By virtue of the internet’s relative recency in our lives, everything in this archive is both of this past and yet very much of this era. Bernie, as the senator from Vermont and presidential candidate that seems to always be called, is the sort of dinosaur who has aged particularly well online, a sentient dad joke who can play his part in memes more nonchalantly than try-hards like Jeb Bush or Hilary Clinton.

As such, behold the videogame Bernie Sanders posted on his website while running for reelection in 2006. It’s a doozy.

No, your eyes are not deceiving you. This is indeed a game in which Bernie Sanders is strapped into a vintage plane and must fly through a storm of mudslingers, right-wingers, moneyed special interest, and fat cats. Literally. And yes, Sanders fights off his opponents with facts. Those facts, printed on rolled-up scrolls, look an awful lot like holy documents or the constitution. In a parallel, Republican universe, those scrolls would indeed be holy documents or the constitution. But this is Bernieland, so they are facts—whatever those are.

Can a game be more 2006 than one in which the left thinks it can prevail on facts? FACTS!!! In 2006, Jon Stewart was still on the air and his shtick had more to do with fact checking than representing his audience’s valiant exhaustion. In 2006, being right about Iraq was a badge of honour for many on the left, Sanders included. Leftist righteousness in 2006 was all about facts. All of which is to say that Sanders’ little side-scroller is more 2006 than High School Musical, Paris Hilton’s debut single* “Stars Are Blind,” and D4L’s “Laffy Taffy.”

The mechanics of Sanders’ game have aged in much the same manner as the man himself. On the one hand, Sanders’ narrative is still all about fending off private interests, Republicans, and fat cats. Indeed, Sanders’ appeal is that he’s always stood for basically the same things. (This doctrinal inflexibility can also be his main drawback. The game, like much of his rhetoric, is about class and money, leaving other sources of inequality by the wayside.) That the version of the game preserved by the Internet Archive looks dated only serves to reinforce Sanders’ bona fides. He appears to have always been like this, and therein lies his appeal.

this is all a horrible idea.

But the world—and America—has changed since 2006. “We believe in facts,” is still a liberal mantra, but the conviction that facts can prevail has taken a beating. Nine more years of banging your head against a wall will do that to almost anyone. In those years, the landscape that a lone crusader like Sanders’ videogame avatar must traverse has also changed. The fat cats are still around, but post-Citizens United, the sky might be too crowded for air traffic control to let a plane like Bernie’s take off.

Therein lies the appeal of Bernie Sanders’ game and of his candidacy. If you’re just doing the math—calculating probabilities, looking at meteorology to avoid a storm of literal and metaphorical fat cats, worrying about the marginal voter and the marginal voter alone—this is all a horrible idea. It really shouldn’t work and probably won’t. But isn’t it romantic to imagine that a candidate who has been doing this forever—a candidate whose internet archive backs up that claim—could prevail anyhow? Bernie Sanders’ videogame is simplistic, antiquated, and loveable. His presidential campaign should rerelease it immediately.