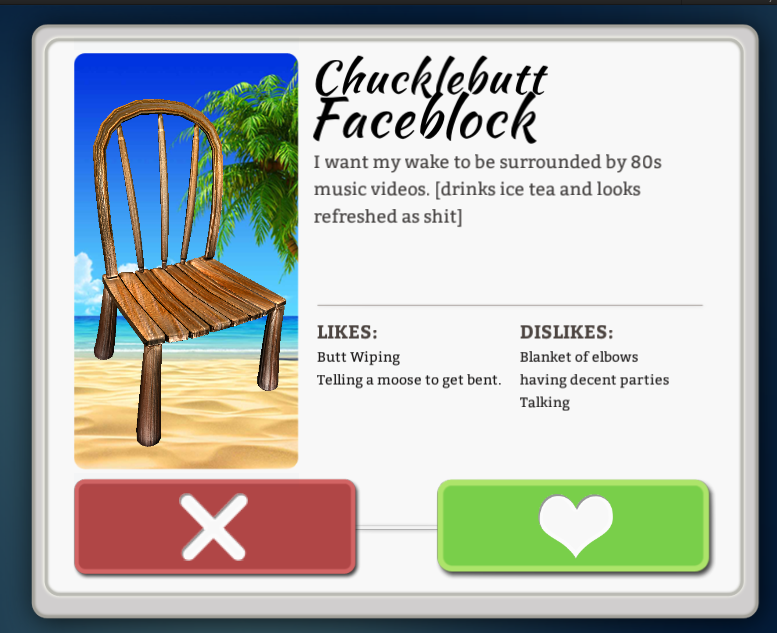 For what it’s worth, I’d guesstimate that 95% of the population had their first sexual experience with an inanimate object.

So let’s get something out of the way: you’ve probably fucked furniture before. Just don’t lie about it, okay? It’s natural, normal, and doesn’t necessarily mean you’re sexually attracted to furniture (although you could also be sexually attracted to furniture.) I mean, just look at this video of five gentlemen giving this ottoman everything they’ve got. Sure, it feels awkward because of the ottoman doesn’t really have autonomy or the ability to consent. But also, mad respect for the attention to rhythm variation, Satisfaktion.

At last, there is not only a seminal viral video to honor sexual relations with innanimate objects, but also a videogame. Found on the TIG Source forums, Chair Fucker strikes a remarkable balance between complete waste of time/energy/space and also bizarrely uncomfortable integrity. The plot, as described by the creator, consists of winning each chair over with your lovemaking, the win state being when you get their digits, which means you’ll be “able to hook up with them again yo.”

According to the forums, Chair Fucker began as a game jam joke back in March but since spiraled into a game of “development chicken where we kept waiting to see who would stop working on it first. Annnd well… here we are.”

Here we are indeed. Though the unnamed creator admits that, right now, Chair Fucker is only a simple rhythm game, they hope to incorporate different thrusting styles and maybe even include a courtship stage into the chair dating process. But for now, “each chair has a specific timing they prefer, and you just gotta find that sweet spot bro.” And, because any self-respecting chair would require proper courtship and maintenance, “if you don’t call regularly or you come back and do a terrible job they gunnn leave.”

As one commenter, Superb Joe, points out, Chair Fucker does not exist in a vacuum. Many games—namely Splinter Cell: Conviction—depict tender acts with a chair. Says Superb Joe when advising the creator of Chair Fucker on possible sources of inspiration: “ubisoft spent millions of dollars and several years making a splinter cell game about sam fisher grabbing chairs in different ways and looking at them really studiously, figuring out the best way to grab and hold the chair etc. think like that, but sexually.”

Though Chair Fucker might disturb some—considering that the creator boasts how “the chair profiles are generated from a combination of text, toenails, and clown blood”—there is still something redeeming about its frankness. Chair Fucker knows you might not understand the love between a monstrous toenail creature and its chair. But this simulator is an invitation: not only into the seedy world of an upholstery fetish, but also into the unknown corners of your own sexuality.

Sure, you might never be able to look at a chair the same way again. And, sure, that may present a problem at work, family functions, and everywhere else chairs exist. But you can’t unsee what you have seen. So, I guess, might as well have sex with a virtual chair for the hell of it.

Chair Fucker has no release date yet, but hopes to be available on PC/Mac/Linux and possibly Android.