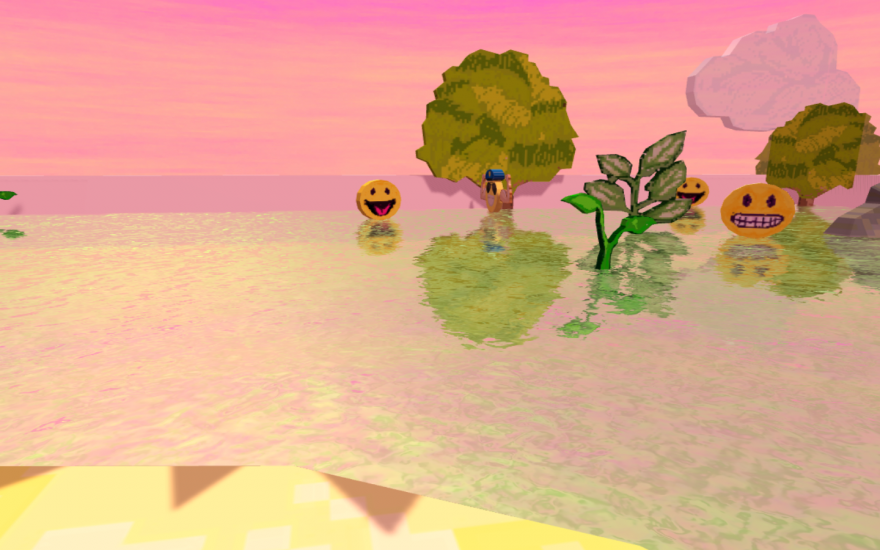 Some people like smiling at strangers and saying hello to passersby. Bless their souls, those creepily friendly weirdoes! I, as you may have guessed, am not one of those people. Nothing warms the cockles of my cold, dead heart quite like strangers giving me the “Fuck right off!” look.

As such, Boom!Boom!Emoji is my kind of game. It is a neon world populated with floating emojis and palm trees on islands. You try to make the smiley face emoji explode by running into them. If you succeed, they explode into firework-like constellations of flame emoji, which is really quite pleasing. Of course, this being a game and not just a form of anti-social wish fulfillment, there are some impediments to your quest to blow up all the smiley faces. More specifically, there are policemen, rendered as smiley faces with serious hats and biceps worthy of Popeye. Collide with a policeman and is game over for you. (That, as best I can tell, is the closest this work of art comes to imitating life.)

Is Boom!Boom!Emoji a horror game? Its smiley faces sure as hell scare me, but clowns scare other people and that doesn’t cause us to categorize them as anything other than light-hearted amusement. The same holds true with regards to Boom!Boom!Emoji, which functions as a sort of exposure therapy, granting players slightly more agency in a low stakes environment. Games cannot cure our fears, but they can make them slightly easier to cope with. Boom!Boom!Emoji isn’t therapy in any traditional sense, but it works.