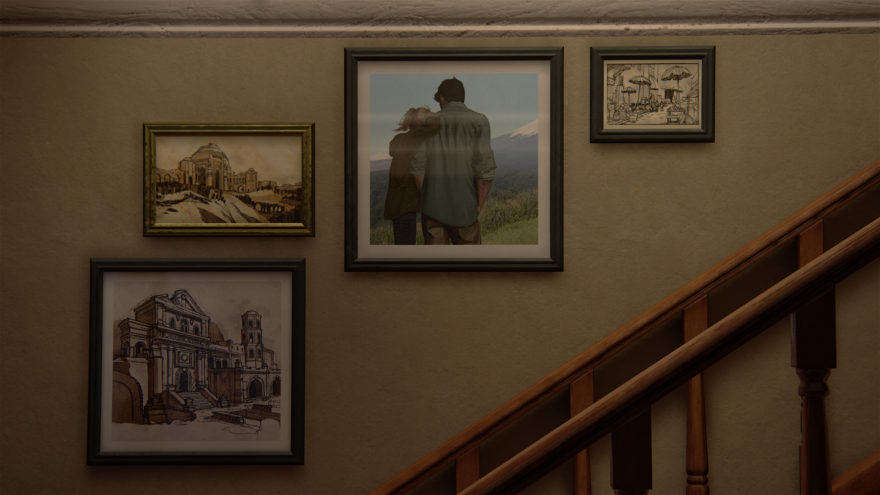 There’s an unlikely thread of domesticity that runs through the heart of Uncharted 4, alongside the exoticism of its adventuring and the breezy violence of its combat. On three separate occasions the game puts us in a house, and asks us about its occupants, casting the player as an archaeologist not of rare antiquities, but the artefacts that tie a place to a person.

The first of these houses, the marital home of Nathan and Elena Fisher, might be imagined as an ideal one; our heroes resting place, their happy ever after. Yet like most homes it reveals itself to be an uneasy compromise, a many layered thing. We begin in the attic; Drake’s “office” and the space he has set aside for the re-staging of past glories. Littered with artefacts, the game encourages us to wallow in nostalgia, as Drake does, recalling the “good times.”

rich with the debris of disordered lives

This listless ego-trip takes place in a space divided in two. At one end of the attic, the golden rays of a dying sun cast the world in a golden glow, yet at the other, the seeping in of early night sets everything in the sharp blue of melancholy. This division is one that comes to define the spaces of the Drake house—the domestic duality of warming comfort of prized memory, and cold purposelessness of an everyday life.

The spaces lit by these contrasting lights are rich with the debris of disordered lives. At first it appears to be charming clutter, the kind that goes unnoticed by those under the spell of their own domestic bliss. But it builds in corners, spills out from cupboards.

Unopened mail, clothes thrown aside, towels twisted on the bathroom floor; here Uncharted 4’s photo-realism finds its true meaning. Not in its rendering of the fantastic but its pained detailing of these interiors, one that insights a kind of dulling claustrophobia. There is sadness here, and regret, in the smear of the dirty windows, looking out on the all-too-near houses of this silent neighborhood.

Houses are, of course, also places of invisible divisions, territories mapped out by the routine movements of bodies. The most obvious in this case is Drake’s fantasy attic retreat, but there are subtler markers. Take the chairs claimed by abandoned clothes, a habit familiar to most of us. Elena claims the office, carefully maintained and ordered but marked with the traits of obsession, the half-closed windows mirroring a narrowed focus.

the home is both a space of connection and disconnection

Drake’s instead claim the kitchen table, cluttered, a lone coffee mug idling there since morning. It is hard not to imagine those early dawns he might spend there in a silent house, beautiful in their isolation, deadening in their routine.

The detail of this house makes a world of it then, an imagined gathering of lives that weave around each other, occasionally touching. It is something universal perhaps, that the home is both a space of connection and disconnection, but there are also particular qualities here.

Most particular of all is the prevalence of frames. Photographs, drawings, posters and paintings sit neatly on the walls, carefully framed and closed. These memories and fantasies confront you at every corner, almost unnerving in their constant presence. Their frames bring out the frames elsewhere in the Drake house too; the frames of doorways and windows, of walls and corners.

Everywhere you look things are closed off, separated out. These frames become a series of traps, locking the spaces of the house into an ever-closing set of 90-degree angles. In my explorations, I find myself pursuing this trend, finding frames everywhere, discovering structures closing in on all sides.

Then, above the bed I come to three framed images, odd photographs that seem bizarre in their focus. They show small sections of sky, blocked, cropped and divided by the forms of ancient architecture. A triptych, they feel like a potent symbol for this entire house: a series of studies of how you can become utterly and inescapably trapped in the structures of your own life.