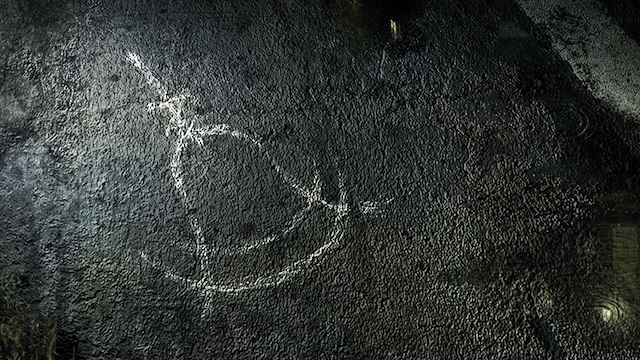 There are few things more unrevealing, and I say unnecessary, in gaming marketing campaigns than the teaser. These are the mysterious websites with ambiguous imagery and countdowns to the reveal of a game that we don’t know if we want or should even care about. If we’re lucky, as with the case of Square-Enix’s teaser site for a new game Murdered: Soul Suspect, revealed lasrt Friday, we get a name.

And a chalk drawing of a rune on asphalt. And that’s it. What gives?

Except that some forum users on NeoGAF poked around and were able to stumble upon an alternate reality game hidden in the url that revealed not much else aside from a sepia photograph of skid row in the rain, and a comment that leads you to believe that it will be a noir. Here’s what we know:

Detectives aren’t supposed to get bloody knuckles, but I’ve done a lot of things I wasn’t supposed to do. I lived through it all, the beat-downs, the back-stabbing, disrespect most people wouldn’t see in ten lifetimes and I never lost a fight… until now.

Naturally, game developers don’t have much to show as they work through the conceptual phases of the game, but wouldn’t it be better for companies to just come out and tell us about the game they want us to play? Although the teaser was once a novel way for publishers to attract attention to their games, these days they’re a dime a dozen. There will be one for just about any big RPG out of Japan, and we saw one for Witcher 3 last week. Even indies are getting in on it. Simogo, the maker of Kill Screen fave mobile game Beat Sneak Bandit, has been teasing their upcoming game Year Walk with portentous images of horses in three-piece suits for what seems like a year.

The idea, of course, is that the element of secrecy will build anticipation for the game, but how are we supposed to get enthused for a game when, in Murdered’s case, we haven’t the slightest about the content, the developer, the genre, or anything?

I’ll misquote the sagacious words of Kramer and leave it at that: Why don’t you just tell me about the game that you’d like me to play?