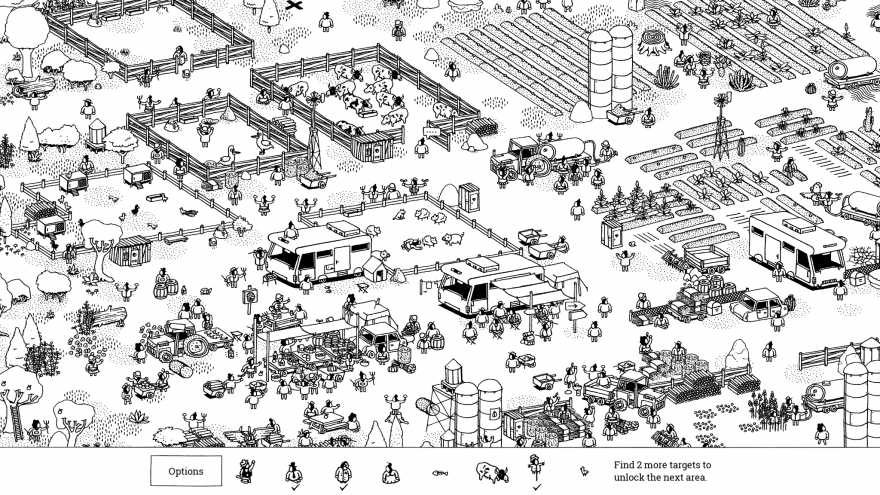 Hidden Folks, which Kill Screen‘s Kathryn Madden originally covered last year, can best be described as an interactive Where’s Waldo? overflowing with personality. With little to no focus on goals, points, or challenge, players simply explore intricate landscapes in search of specific “targets” (or “folks”)  hidden throughout each scene. So much of the digital toy’s charm derives from its handmade feel, with illustrator Sylvain Tegroeg’s heavily inked art style creating lively scenes that feel populated without seeming overly busy.

Indeed, the unusual joy of Hidden Folks is just how human and authored it feels, especially when most games (particularly in the free-to-play saturated app marketplace) tend to come across as clinically designed virtual worlds at best, or lifeless bits of code at worst. But Hidden Folks, with its rugged edges and human grunts, radiates with the personality of its creator, Adriaan de Jongh. Best known for releasing unusual multiplayer iOS games like Fingle (2012) and Bounden (2014), de Jongh has a history of bringing people closer together in the real world through virtual play.

The game’s unique quality appears to come from the duo’s focus on a tactical, bodily approach to game design. “Everything in Hidden Folks is draw by hand, scanned in, placed, layered manually, animated, and scripted,” reads the press release. “All sounds you’ll hear originate from the developers’ mouths.”

bringing people closer together in the real world through virtual play

While some might accuse Hidden Folks of being a point-and-click game without plot or challenge, its simplicity allows for a lightly meditative and humorous experience. Also, I dare you not to giggle at the Lumpy Space Princess-esque “hayyy” sound that emits when you click on one of the human icons in the first level. It gives Pendleton Ward’s masculine valley girl voice a run for its money.

Hidden Folks is available for download on PC, Mac, Linux via Steam for $7.99 and $3.99 on the iOS app store (with an Android version coming later).