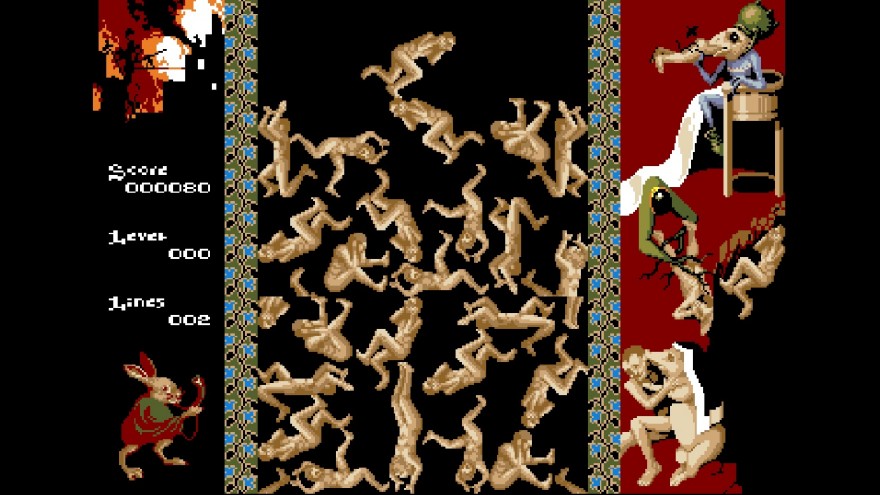 Pedro Paiva once impaled Mario with a large wooden stake through the anus and out the mouth. His mantra is to fill the neglected spaces that other videogames don’t, and he’s been committed to that for a few years now. The violent deconstruction of gaming culture and all its supposed heroes just ran parallel to that effort.

Unifying all of Pedro’s creations is a garish disfigurement of pop culture icons and (sometimes) high art. He does this with flashing colors, painful pixel art, and a tortuous distortion of electro saw noises. It’s precisely that combination that defines Pedro’s latest mash-up, Hieronytris.

limbs and tendons repurposed to fit the demands of puzzle game pieces.

The awkward portmanteau of this grotesque puzzle game sets the scene: together, for the first time, are the eternal tortures of humanity as depicted in Dutch artist Hieronymous Bosch’s Garden of Earthly Delights, and the Soviet-born videogame classic Tetris. As with Bosch’s triptych and most console and PC ports of classic arcade games, the screen in Hieronytris is split into three distinct parts. The left keeps score amid the image of man dragging heavy pillars through hell. The right-side contains direct, pixelated recreations of Bosch’s work; humans being ingested, forced into bestiality, and wrapped in brambles.

But even these potent images wane when compared to the disturbing game that you’ll play in the middle section. Rather than the friendly tetrominoes of Tetris, it’s the rigid forms of naked men that cascade the screen for you to sort into neat horizontal lines. You rotate their bodies as they judder downwards against a surrounding blackness, pushing feet into buttocks, and elbows against faces.

This isn’t arousing in the slightest. Flesh and bone is gamified to appease the lords of Bosch’s hellscape. It’s Tetris by way of The Human Centipede; limbs and tendons repurposed to fit the demands of puzzle game pieces.

Difficulty emerges in trying to equate each human shape with their tetromino counterpart so that you know how to piece them together to a success. And if you do manage to fill a horizontal line with human bits, then a small demon with a large jaw and larger teeth chomps across it. That entire line, its torsos and legs, are deleted to aid in your constant clearing of the screen.

The agonized screams that accompany this process makes my skin crawl. As with Jennifer’s shrill whelp in the opening of 1992’s Splatterhouse 2, the limited tones of chiptunes crunches and distorts human anguish as if it’s being engulfed by a hungry machine.

Hieronytris is the most disturbing puzzle game I’ve played for that reason. Who knew that the macabre details of Bosch and the juddering limitations of retro games was a match fit for hell?

You can download Hieronytris on PC for free right here.