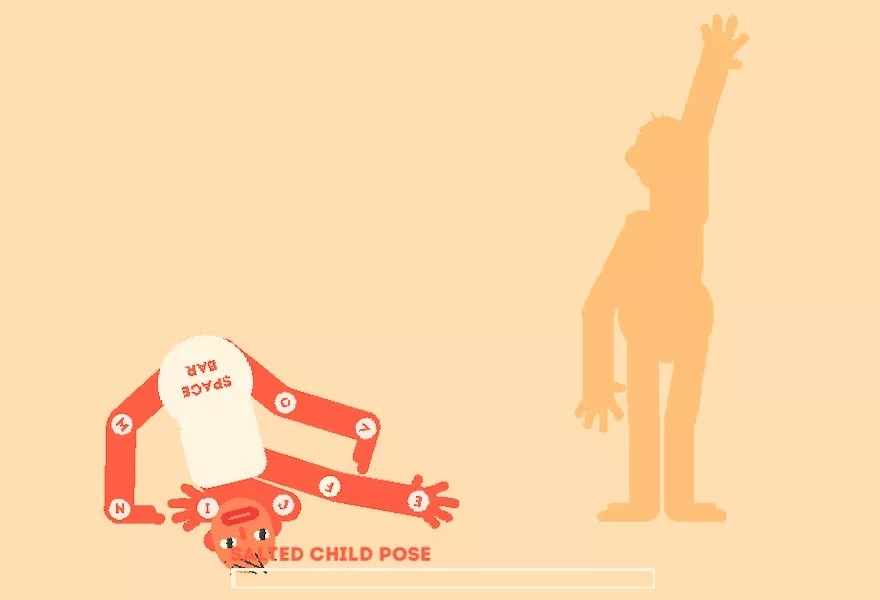 Released over the weekend as part of the Ludum Dare game jam, Jenny Jiao Hsia’s Wobble Yoga may be the most honest exercise game you’ve ever played. Well, aside from her other yoga game, that is. There’s no fireball-throwing aerobics instructors here, nor are there any claims that you’ll leave the experience healthier than when you came. Rather, all Wobble Yoga has to offer is a challenge, a keyboard, and shame.

The game has you taking on the role of a balding, out-of-shape man as he tries to recreate various totally-not-made-up yoga poses by matching up with a silhouette behind him, failing more often than he succeeds. Unlike Hsia’s last yoga game, which has a similar conceit, there is no time limit this time around, but the tradeoff is that our hero—let’s call him Wobble Man—has more points of articulation than in her previous project. There are a total of nine buttons, each of which controls one of Wobble Man’s joints, similar to running game QWOP (2008), and it’s your job to use them to try to get Wobble Man into tip-top “tired pretzel” and “salted baby” shape.

The result is more failed chicken dance than Saturday Night Fever (1977), though, as it quickly becomes apparent that trying to get Wobble Man’s Jell-O-like body to match whatever pose you’re assigned is somewhat like trying to herd cats. His body parts just do not want to listen, and he moves like a dancer that’s half-forgotten his choreography and is trying to figure it out on the fly by copying his neighbors. Also, if you lift him up by his feet, he apparently has anti-gravity powers ¯\_(ツ)_/¯

All of which is to say that Hsia’s take on yoga feels more authentic than any sales pitch about health or improved memory ever could. I’m not sure I know how to balance chakra levels, but I definitely know how to flail about until I fall, sweaty and laughing, onto the floor.

The theme for this Spring’s Ludum Dare was “Shapeshift.” You can check out Wobble Yoga over on Hsia’s itch.io, and learn more about Ludum Dare over on it’s website.