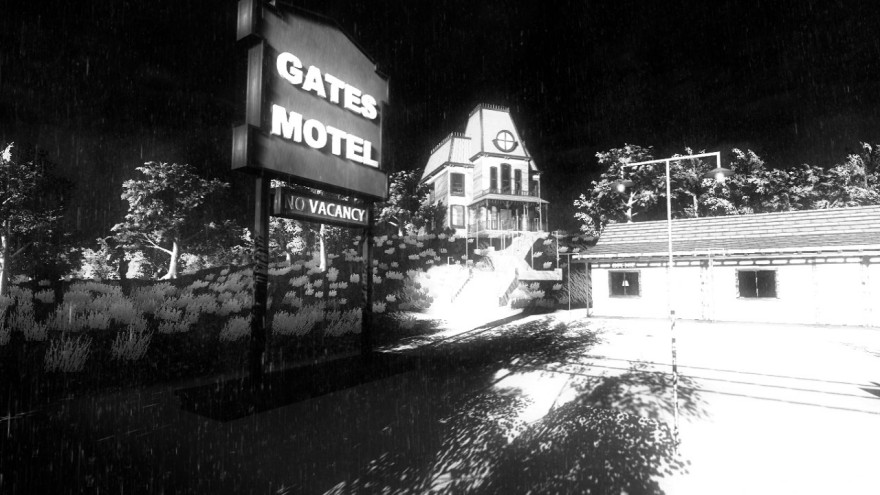 Legendary filmmaker Alfred Hitchcock’s Psycho (1960) is a classic. Psycho made waves in a magnitude of ways: like killing off its female lead in the shocking first third in the pivotal shower scene, displaying sex and violence interchangeably within a mainstream film, among other, ever-shadowy film motifs. Psycho is a pure symptom of its time—it was one of few films that combatted the conservative Production Code that stifled Hollywood until 1968. Psycho’s influence is eminent on any modern thriller. In fact, it’d be fair to say that it’s hard to see a thriller that wasn’t influenced by Hitchcock’s seminal film. Shockingly, the tense Hitchcockian aesthetic hasn’t been seriously implemented into videogames. At least, not so directly as it has now.

Gates Motel is clear on its inspiration, and it’s not hiding it

The aptly titled Gates Motel is an upcoming homage to the ominous Bates Motel of Psycho, in which main character Norman Bates “resides” with his murderous mother Norma. The in-game Gates Motel is nearly a perfect recreation of Psycho’s name-rhyming lodge (though hopefully, doesn’t turn out as abysmal as Gus Van Sant’s shot-by-shot film remake). The game is bleakly stylized, with dramatic shadows and a fully desaturated environment, harkening back to the early days of black-and-white film, and to the original Psycho’s lack of color itself. Gates Motel is clear on its inspiration, and it’s not hiding it.

Gates Motel’s gameplay is familiar to the survival horror genre (of the well-trodden “collect things for your inventory as the story progresses to survive”), but barely shares semblance with the film’s plot. The game tasks you as a nameless woman trying desperately to survive, her imminent goal to find a telephone to call the police. She only has two enemies: the owner of the motel, and her very own fears. How those fears manifest remains a mystery, as the game currently only has a brief a trailer and description. Though, the rainy, mysterious shadowed world of Gates Motel gets one thing right: it looks perilous. And a Norman-lookalike is probably skulking about somewhere.

Avoid motel showers at all costs and vote for Gates Motel on Steam Greenlight.