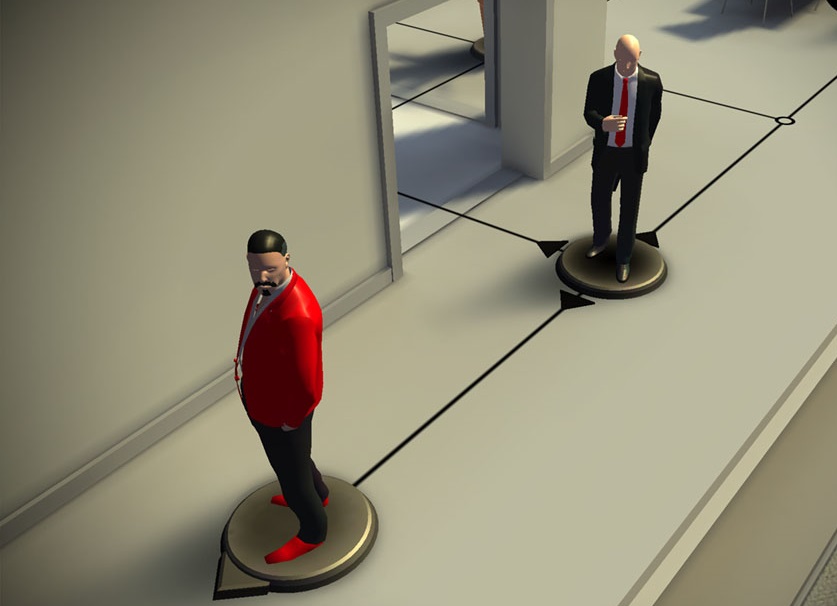 Skeuomorphism was supposed to be dead. The desiccated husk of iOS 6, with it’s faux faux-leather calendars and optical illusions, was left in the gutter, the victim of a hit called in the onward march of design. We were all supposed to be better for it, basking in the glory of flatness and bright colors, but one man couldn’t let it go. Agent 47, normally the one flicking the safety off, has returned in Hitman GO with an agenda: the resurrection of things pretending to be other things.

In this case, it’s videogames masquerading as boardgames. In the early days of mobile gaming, the goal seemed to be approximating the console experience as best possible. Those conditions weren’t ideal. An iPhone isn’t a console; it’s a smaller, bite-sized, more intimate experience. And in the relatively short time span since the iPhone became a real gaming contender the mobile side has started whittling down a niche. Sharp, stylish games that are playable in by-the-minute, rather than by-the-hour, chunks.

Not exactly an emulation of the boardgame experience. Boardgames are best when we gather friends for a bawdy night of dice, cards, wooden tokens, outrageous boasts and riffing, all around the table with rules of varying complication. The physical component of these games is what Hitman GO is aiming for in its aesthetic, but the gameplay is firmly rooted in the solitary mobile experience. As such, not unlike the Calendar app of yore, this game is a conflicted title; a mobile puzzler rendered in three dimensions, as opposed to Candy Crush Saga’s bejewelled two planes, for no apparent reason other than it looks great.

And it does. Each section is a tiny stage. The animations are primarily limited to the scooting of the various figures. Ambient music mixes the sounds of wooden scuffling with the environmental soundtrack and I swear some soft, nearly indiscernible voices. You can drag your finger around the screen to peek into some other corners of the area, catching other spies eavesdropping or residents partying outside the scope of your missions, whatever it may be.

Seriously: whatever it may be. For all the boardgame dressing, there’s an initially distressing lack of instructions. Hitman GO offers no tutorial, no guiding principle, no real indication of why you are a moving a tiny well-dressed bald man around someone’s backyard. Just a few black lines that you surmise you can sweep along, instructions for earning points to unlock more modules down the line, a lightbulb with a number. I used this lightbulb for the first two levels until I looked online and figured out this was part of Hitman GO’s (light, innocuous) in-app purchasing model.

Hitman GO is not a boardgame nor a particularly compelling facsimile of one.

Of course, I can’t swipe my Visa to victory in a game of Settlers of Catan, nor would I if presented the option. Like the best metaphors, skeuomorphism breaks down when pushed too far. Hitman GO is not a boardgame nor a particularly compelling facsimile of one, beyond the tokens and the boards. But the game succeeds for sticking to the aesthetics of its inspiration, and moving on as the game and platform demands. It drapes a well-tailored suit over a tight mobile puzzler, ditching the fluff and abstracting the hitman experience into a walk around the diorama.