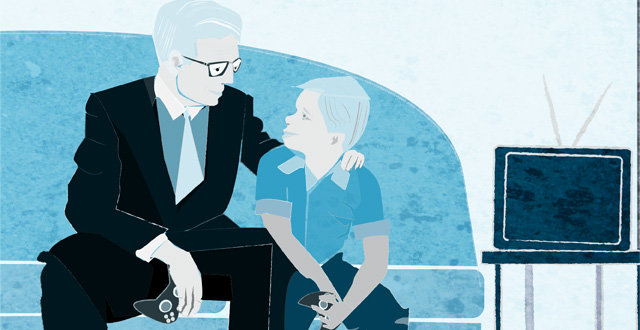 The last computer game that caught my attention was Might and Magic, which I played for a few years, often with my sons. When they were young, I’d save a winning battle—usually legions of dragons against a castle—then set each boy up for the final fight. As they got older, they asked me for tactical advice. Years later, I ran into serious difficulties with Heroes of Might and Magic III and would have to ask my sons for help. The cycle of videogaming turns: the son becomes the father to the man.

Then we all discovered World of Warcraft.  We set up two accounts, one for the family and one for me. I began with a paladin named Thorken, and pretty much loved the game from my first venture into Elwynn Forest.

Because I wandered the digital world, my leveling was woefully slow. And I came to understand that WoW was more than a mere game; it was a metaphor for the player’s personality.

My wife created an Elf hunter. In life she is a chef and likes to knit; in WoW she devoted a lot of time to cooking and sewing. She has always owned dogs, and took great delight in preparing snacks to feed her in-game pet.

My older son is quite frugal and diligent, and rarely changes clothes more than once a week. He has no real hobby. In WoW, he quested consistently and never bought gear, but wore what he picked up. He ignored fishing and cooking.

The younger boy, however, is ever-enthusiastic for something new. He is group-oriented, loves clubs and sports, and enjoys being both provocative and silly. His style of play was to start a new character every three weeks, run him quickly up to level 30, get bored, and start another new character. He joined in-game groups and messaged insults until the leader threw him out. He had more actual fun than anyone in the family—exactly as in real life.

This pattern continued among their friends. A kid known to steal Magic: The Gathering cards from someone’s bedroom was the same WoW player who’d ninja the best gear right out from under you. The boy who excelled in geometry never got lost in a dungeon. The tomboy girl was the toughest warrior.

In life, I’m a collector of found objects: rocks and feathers and animal bones from the woods. One day my sons saw me at the WoW bank, arranging my belongings of rocks and feathers, all gray items, utterly useless in the game. The boys became overjoyed, in the way that teenagers can when realizing that their father really is a moron. Knowledge of my in-game collection of stupid items quickly spread throughout the high school. As a joke, their buddies began sending me rocks and feathers through the in-game mail service.

Amid some pressing family economic concerns, I responded in WoW by focusing on the Auction House. I downloaded Auctioneer and began running scans three times a day, very carefully following trends, and sending Thorken after valuable goods. I created a new character to run the Auction House, then set up her counterpart at the Neutral auction in Gadgetzan to pick up Horde bargains and jack the price for Alliance bidders. I noticed that Blood Elf bandit masks sold for a large sum, and immediately sent Thorken out on a very long mission to the newbie zone of Azuremyst Isle. It proved difficult, since the bandit himself is invisible, pops up indiscriminately at various locations, and rarely drops the mask. But Thorken was no stranger to difficulty, and the endless loops around the island proved contemplative for me, even meditative. Plus, I made a fortune in gold.

My oldest son’s 18th birthday arrived, and I was pretty much broke—between teaching jobs with no book contract forthcoming. The most traditional 18th birthday gift is a car, but I couldn’t afford one, even a used jalopy; and the whole situation bothered me to no end. On his birthday I sat him down at the computer, and told him to open his WoW account and check his mail. He did so. I’d given him a flying mount that cost 5,000 gold. He was very grateful, the first of his friends to have a flying mount. I felt proud that I’d been able to at least provide virtual transportation of a high degree.

Eventually my work took me to Los Angeles, writing for television, an experience which made me feel as if I was actually occupying the virtual world of a videogame: ostentatious, larger than life, garish and bright, wacky characters, incredible visions—all while working within an industry whose goal was the realistic depiction of a false world. Sort of like WoW. My family stayed behind and I often felt lonely.

On weekends, I played WoW with my wife. We put our cell phones on speaker to talk, and assisted each other with quests. I created an Elf hunter to partner with her. We roamed about the more beautiful zones of Feralas, Felwood, and Desolace, and had conversations along these lines:

“Good. The toilet is leaking again.”

“Call what’s-his-name. The same guy as last time. Your pet is dying, I think.”

“He didn’t call me back. I’m being attacked.”

“There’s three more mobs. Also, the credit card company put on a late fee on for no reason.”

After leaving Hollywood, I occasionally played in a desultory way, mainly killing pirates in Lost Rigger Cove. By this time, my hunter was strong enough to take on 10 pirates at once, which allowed me to rake in plenty of silver, lots of highly saleable greens, and the occasional blue. Of particular worth was a blue item called Wirt’s Third Leg, a terrific mace. Killing pirates for an hour a night became a means of relaxation after the long day of working on a book. Plus, I was refilling my coffers with the goal of 10,000 gold.

One day I received an email from Blizzard saying I was banned from the game. Suspicious activity had emanated from the account, and I needed to contact them in case I’d been hacked. I sent a dozen emails, all unanswered. I called the help line twice a day for a week, and each time was told that Blizzard was too busy to take my call, that I should email them directly. Finally they responded, saying my account had indeed been hacked, but they’d lifted the ban. I immediately jumped on WoW. The hackers had placed an Authenticator on the account, a lock with a secret code known only to the purchaser. My access was still denied. I began a fresh flurry of phone and email appeals to Blizzard: no response.

My three-year run had come to a screeching terrible halt. Thorken was trapped in a pixilated world from which I was banished. I felt powerless and angry. It was as if my house had been burglarized and the bandits had locked me out. There is no support system for victims of WoW hackers, no self-help group, no commiseration from fellow victims. All my online research came up with the same results: Blizzard sucks. It wasn’t just me they were ignoring, it was every player who’d ever been hacked. And there was no recourse. WoW was the only game in town, a virtual and realistic monopoly, and Blizzard was the Dark Force of the Universe.

I tried a Might and Magic expansion, but it simply didn’t help. SimCity 4 was lousy. Civilization was boring. And my beloved Duke Nukem was still lost in development. I was reduced to playing with Legos.

Then an email finally appeared, saying that Blizzard had finally gotten around to reinstating my account, the Authenticator had been removed, and my characters restored! No doubt this was motivated by the pending release of its expansion Cataclysm. I immediately opened WoW, sighing deeply at its familiar start-up sound, the music that had been the soundtrack to my family’s life for so long. I was leaving winter in Iowa for the welcoming warmth of Gilneas.

In a moment, I, Thorken, had returned.