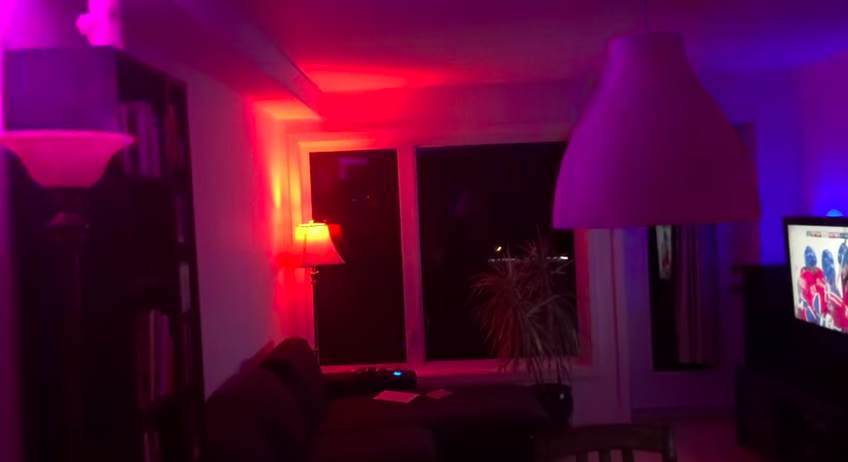 The Montreal Canadiens’ season is over. Last night, following a 4—1 loss at the hands and sticks of the Tampa Bay Lightning, the Habs were eliminated from the National Hockey League’s playoffs. Their barren run of seasons without bringing home the Stanley Cup now sits at twenty two. Viewed in the light, the only good thing to come out of the 2014-2015 season is François Maillet’s homemade goal celebration light show.

As a proper Habs fan, the lights in Maillet’s show flash red, white, and blue. This is not to be misconstrued as an allusion to the American or French flags. Those are the colours of the Canadiens and light fixtures, including under-cabinet LEDs, flash every time the team scores a goal. For good measure, the team’s goal music from the 2012 season, which was imaginatively titled “le goal song,” accompanies the light show.

In the grand tradition of almost all worthwhile human endeavours, Maillet’s lightshow was motivated by the desire to not move. Thus, while Maillet originally planned to trigger the show by pressing a button, he eventually opted for a more high-tech route. On his blog, he asks: “Wouldn’t it be better if the celebratory sequence could be triggered automatically?”

Who wants a light show when the enemy scores?

Every time a goal is scored in hockey, announcers yell in excitement and a foghorn is blown. Using old highlight videos, Maillet was able to isolate what this sequence of events sounded like. He then used machine learning and a dataset of goal celebrations to train a computer to detect the difference between the home team’s goals and those of its opponents in real time. What fan would want a light show when the enemy scores?

Maillet’s lightshow is an extension of the idea of immersion that is peddled by sports media and sports games. In many ways, it is now possible to sit in the front row while in your own home, or at least to feel like that’s the case. That’s the beauty of big screen TV and games. Even teams get in on the entertainment: Maillet’s (and, in the spirit of full disclosure, my) Habs have their own light show that plays before every game. It involves the projection of film and animation onto the ice and a little boy skating around with a torch. The pregame show’s creators told the New York Times that they felt a pressure to one-up themselves again and again. The prevailing aesthetics of sports demand a sense of immediacy and pizzazz: Maillet’s home now has both of those things. Alas, his house, like the Bell Centre, it is currently lacking in Stanley Cups.