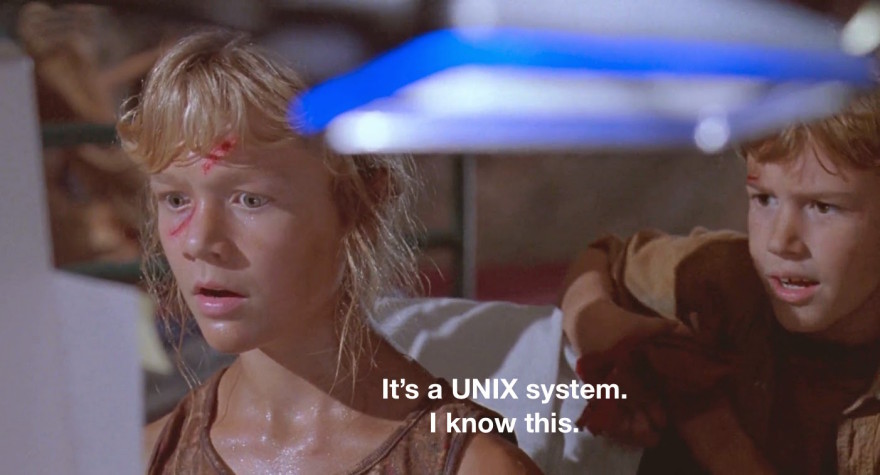 Jurassic Park taught us two incontrovertible truths: 1) Velociraptors crave human flesh likes its their culture’s rarest and finest delicacy, and 2) Hacking is about mashing your keyboard and finding files through a 3D file-viewer.

Well looks like the most exaggerated of those indisputable truths happens to be the former.

Yes, that’s right. That “UNIX” system we’ve been memeing (spawning an entire subreddit) and deriding for being a classic example of 90’s Hollywood misrepresenting technology turns out to have totally been a real thing.

And now, with the help of a game called I Know This (named in honor of Lex’s infamous realization), you too can “hack” Jurassic Park‘s unnecessarily elaborate 3D file browser interface, only to save the day with your nerd-knowledge. As a part of the 2015 Global Game Jam, the beta for I Know This was was created in under 48 hours. However co-creator Renaud Bédard says that he spent many evenings afterward tweaking multiple-endings and smoothing out bugs.

This is what I, as a computer-illiterate person, assume hacking must feel like.

The game centers around your search for a golden file containing the information you wish to illegally obtain. I Know This captures what I, as a computer-illiterate person, assume hacking must feel like. You hit every key on your keyboard with feverish certainty, pausing only to mash the enter key before barreling on, the code erupting from your fingertips instantaneously and effortlessly. It’s an easy power trip, with no complications or excessive labor whatsoever—a claim I see backed by various accurate movie and TV representations.

Your main guide through the Neu/Nix system is Clicky, a happy-go-lucky Office Assistant who’s enthusiastic attempts to help you start seeming pretty homicidal. Like the Microsoft Office paper clip who inspired Clicky, he’s an assistant that tends to get in the way more than actually assist.

The (appropriately) overly dramatic synth music (by Matthew Simmonds) adds an intense, 90’s-inspired theme to your cybercrime-ing. You feel like Agent Mulder, only ten times more badass and facing far higher stakes. The game even adds in a layer of meta-narrative. “The filenames you see in the game are lifted from your hard drive,” Bédard explains, “and 8.3ified for formatting and retro-chic reasons!”

Download I Know This for free on Windows, Mac, and Linux. You can find the two primary creators, Renaud Bédard and Gavin McCarthy, on their respective websites.