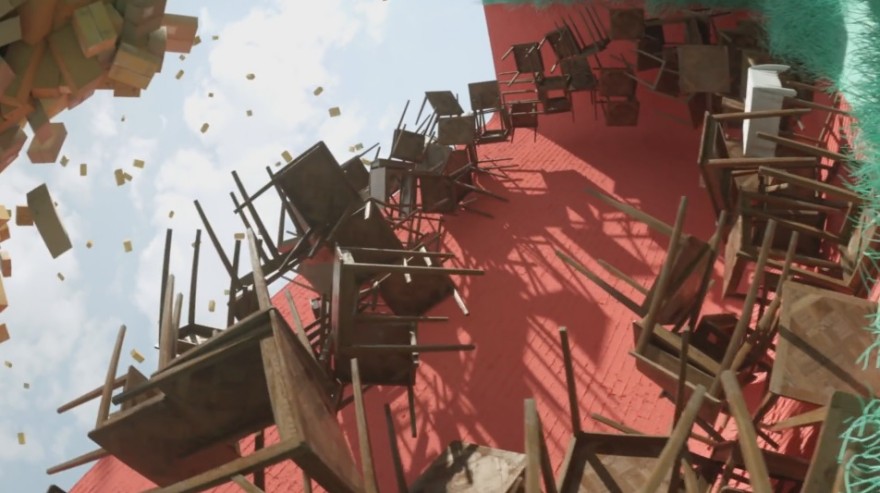 Created for a Render the Metaverse OTOY and Oculus sponsored contest last year, the virtual reality project “Mashup Between the Clouds” is a surreal journey into a world of stacked pallets, overturned desks, and cardboard boxes. It’s also a virtual reality still, meaning that while you could look in 360 degrees, you are constrained to simply observation.

More recently, the project’s creator Moritz Reichartz released a new way to look at his Metaverse, throwing a “collision cam into the scene” to see what happened. The resulting video, “Ride the Metaverse,” is a carnival ride in perhaps all senses of the word. From the sound effects and the cries of distant, unseen people to the overt sense of nausea that accompanies a lack of control in such a well-rendered three-dimensional space, Ride the Metaverse is very different from the original VR piece that it explores.

Moritz had previously published HD stills of the piece, which highlight the surrealness that only virtual reality can reach. But they were still, motionless, and didn’t really give the audience any sense of feedback. They didn’t, in Mortitz’s words “show the exciting spacial qualities of the piece,” as he said to me.

The collision cam, which hurtles the viewer past gravity-defying towers of boxes, does just that. For Mortiz, it also allows the piece to be viewed in a more “classical medium.” Virtual reality does not currently lend itself to accessibility but Ride the Metaverse at least gives viewers without access to the technology a full 360 degree experience of a digital still.

Ultimately, Ride the Metaverse and “Mashup Between the Clouds” are two parts of the same work, two different vantage points from which you can look into the imagination of Moritz Reichartz. He could’ve simply filmed someone walking through the space, but instead gave a completely different experience, a new way of looking at something he had created prior. “The thrilling and unforeseeable is more thrilling to me,” he says.