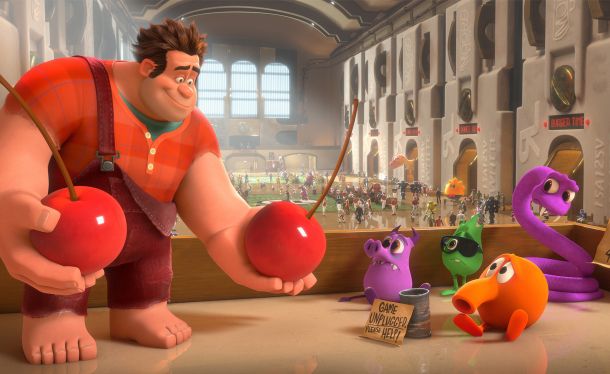 The Disney execs behind the forthcoming Wreck-It Ralph must have been asking: How do you get more aging gamers to see your videogame movie for kids? The answer: Aggregate cameos from nearly every recognizable videogame character ever. Maybe even make a game out of seeing how many you can spot while watching the film. IGN wanted to know how they got away with it.

Just to put it in perspective, most animated movies have somewhere in the neighborhood of 40 or 50 character designs, but Wreck-It Ralph boasts a staggering 188. What’s more, dozens of these models are based on actual characters from actual video games. Especially in locales like Central Station — the arcade cabinets’ master power strip — we see numerous familiar faces like Q*Bert, Sonic the Hedgehog, Chun-Li and Bowser all interacting in one place.

And it looks like the casting became a fight between developers over who could take up the most screen-space, according producer Clark Spencer.

“We did have kind of a check-in process, where we would show them the footage and say, ‘What do you think? Is it good?’ At one point, [Nintendo] said, ‘Bowser’s much bigger than that. He’s way bigger than Zangief.’ We were like, ‘Okay, we’ll make him bigger. How’s that?’ They’d say, ‘Yes, that’s good — but he wouldn’t drink his coffee like that. He wouldn’t make that mouth.’ [Laughs] Of course, then people from Sega said, ‘Well, Doctor Robotnik is bigger.’ [Laughs] They wanted their characters bigger and bigger.

Spencer insists that the who’s who is subordinate to the narrative, which develops around nothing else but bi-virtual love between John C. Reilly’s Ralph and Sarah Silverman’s Vanellope von Schweets.