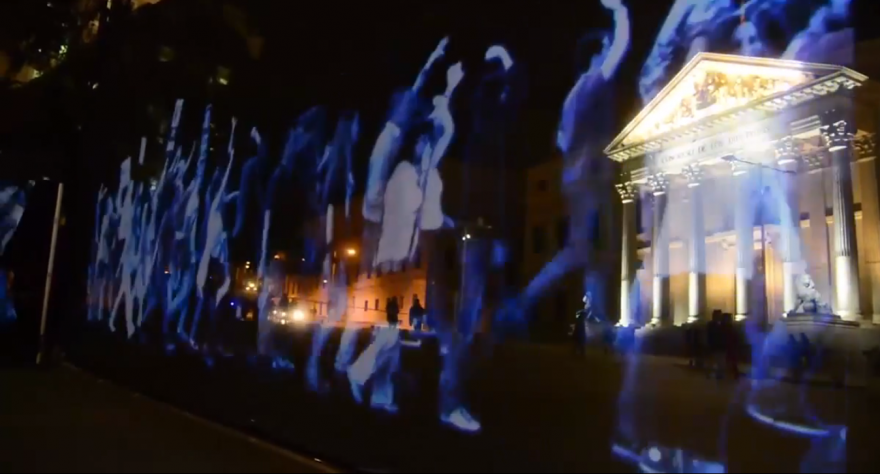 Somewhere in the future of the mid-1980s, rockstar journalist Edison Carter had his memories captured into a computer software imaging device. From this, Max Headroom was born. Max would travel through television sets, gathering information to expose the wrongdoings of major news corporations. However, Max was just a fictionalization, made out of hours of make-up caked onto Matt Frewer’s face, from a “cutting-edge” British cyberpunk show.

Today, we have a computer-generated reality. The Spanish government recently passed a law restricting citizens’ rights to protest. The new law, ley de seguridad ciudadana, allows citizens to be fined up to $31,000 for taking pictures of police officers, protesting public authority, and peacefully rallying in front of government buildings. Eighty-two percent of Spanish citizens rejected the law and demanded a repeal, according to Spanish daily paper El País.

It’s an ironic rebellion to the government’s wishes

In response, Hologramas por la Liberdad and No Somos Delita, two activist sites, found a loophole and teamed up. You can’t be persecuted for rallying in front of a government building if you’re not actually there. And so 18,000 people gathered from all over the world swarmed the street outside of Spanish Parliament … as holograms. It’s an ironic rebellion to the government’s wishes: if citizens aren’t allowed to protest in person, they’ll do exactly that—protest as non-people, as projections.

Holograms por la Liberdad organized the world’s first hologram protest by inviting people to record videos of themselves speaking out against the new law. The videos and voices were converted into holograms to give the appearance and sound of a protest in front of the parliament. It’s not completely clear how the holograms were projected (there appears to be some sort of large screen involved), but, unlike Max, these people were full-bodied, transparent and greyish-blue, more similar to something out of Poltergeist than Max Headroom’s day-glo 80s future. They lived up to every expectation of holograms I’ve had since I first saw Star Wars and witnessed Leia ask Obi-Wan for help through a small projection. It’s possibly even more exciting than watching Tupac’s ghost perform at Coachella, which, while apparently not a hologram but a trick of mirrors, was a turning point of my life.

Holograms put us in a weird predicament, though. While it allows people from all over the world to gather in one place and brings everyone closer together on one cause, it, in a way, also pushes people farther apart. I’ll admit, I haven’t participated in a hologrammed protest, but I don’t know if Twitter interactions have the same impact as talking to people who are living in the moment with you.

While I can’t speak for everyone, I think Spanish citizens understand this, too, which is why, instead of being complacent with a protest of holograms, they are trying to earn back their rights.