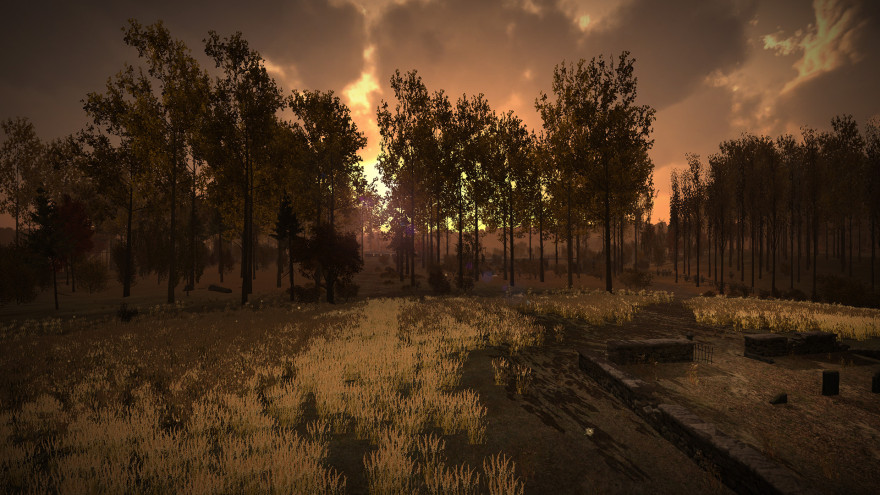 Title:
Home is Where One Starts...

The most surreal thing for me about playing Home is Where One Starts… was how much the rural farmscape had in common with my grandmother’s place. She lived in a small, one-level brick house on a farm in southeast Tennessee, hemmed in by trees and wooden fences, and situated only ten yards or so from the main road. The house had a few modest bedrooms down a narrow hallway leading out of the living room, and the whole place had a smell that wasn’t distasteful, but was definitely distinct.

Behind her house, too, was a stand of trees that marked the edge of an open field, thick with knee-high grass (no cemetery though). The west end of the field backed into a ridge where someone had dumped some old heavy-duty appliances probably more than a dozen years before I found them—a dishwasher, a fridge, and some other rusted miscellany. Finally, in probably the most striking congruity between my life and the game, a walk of less than a quarter-mile south from my grandmother’s carport—across the plot where my dad, my sister, and I raised corn in the summers—would lead you to the bare foundation of an old destroyed house.

Sadly, my grandmother left her house a few years ago, and the city used the land to expand its airport. The whole surrounding landscape was effaced—trees gone, creek rerouted, and hills leveled for the new runway. There was no great tragedy when it happened (I was already in college, and we had agreed to sell the land), but there’s still a strange dissonance between the strong feeling of the place I remember and the reality of what’s there every time I drive by. It’s like standing on the foundation of a house decades after a tornado ripped the building away.

Memory always has this kind of ambiguous presence in our lives. The stuff that made the memory is long gone, but the germ of the event persists and affects us long after. Where details are fuzzy, we fill in the gaps (I’m iffy on the actual location of that old dishwasher and fridge), and the unconscious rearrangement of things, people, and events in our minds becomes part of a narrative about who we believe we are.

The power of memory is exactly the subject that Home is Where One Starts… takes up. You play as a young girl wandering around her family’s land after she misses the bus to school. There are no instructions or objectives, but walking through certain areas triggers narration from an adult-aged version of your protagonist. You are able to pick up and examine some items scattered throughout the game to try to get a better handle on the story. As you play more, the narrator assigns significance to a constellation of objects and places around the farm, and you are gently guided toward the story’s emotional climax.

ruin and destruction are a prelude to creation

After being dropped into this world, I poked around at a couple of objects right next to me and then immediately sprinted for the edge of the game. I used to do this at my grandmother’s place too; I’d see how far away I could get from the house without arousing suspicion or getting lost. In the game, as on the farm, I tumbled over fallen limbs and forced my way through tall shrubs to get a sense of what I was working with. The area is by no means huge, but it is enough to have its intended effect: to occupy a single slice of memory in which a kid could explore and indulge her curiosity in a beautiful environment mired by feelings of loss and alienation.

Most of the stories you are told and the objects you find have a general tenor of happiness. When you approach the pond across the road, the narrator tells about how she used to try to climb on top of the haybales and how elated she was when she finally did it. Entering the girl’s room will invite an explanation from the narrator about the pictures and origami figures of birds and the posters of planets. A sheet metal fort in the woods on the north side of the house was a decked-out mansion, you are told.

Still, you can sense an abiding pain that is understated by the stories. Toys are found among cluttered messes of garbage and debris or in some other sad and lonely place. There’s a rubber ducky you can examine in the backyard, but it’s found under a grimy bathtub, next to a sprig of flowers framed by a toilet seat. A soccer ball rests against the back wall of the cemetery in the field, and your pink and white bike is locked up in a crummy wooden shed with some gas cans and unused tools.

As much as this clutter is just part of the story, it also functions as a kind of extended allusion to the poem from which the game gets its title. “Home is where one starts” is a partial quote of a famous line from the end of the “East Coker” section of T.S. Eliot’s Four Quartets. In it, Eliot ruminates on the interpenetration of past, present, and future and about how ruin and destruction are a prelude to creation. The first two stanzas of the poem are riddled with visual and thematic similarities to Home is Where One Starts…, with images of collapsing houses disturbing the domestic peace of “home,” while the mess of organic matter clumped up in each line reminds of the decrepit signs of life strewn around the game.

But most importantly, Home is Where One Starts… takes to heart Eliot’s premise that the past and the future are always somehow deeply involved in present. As you hear the narrator talk about her past, it’s clear that she isn’t just reminiscing: she’s writing an origin story. She wants to demonstrate that her future was already written in her past—that her sense of freedom and independence was a seed planted on that day years ago. Metanarratives like these are always a bit slippery and often don’t hold up to scrutiny, but this is an exercise that we all regularly take part in, and it helps us make sense of who we are.

My only reservation about Home is Where One Starts… is that the story reads like a first draft. It raises too many questions that need elaboration and leaves too many narrative avenues unexplored. You assume the household is still haunted by the loss of a mother (but maybe she’s just gone at the moment). You suspect there may be some clues that hint at physical abuse (neglect is pretty much undeniable). It’s possible that the destroyed house next-door used to belong to the protagonist’s family (but it could easily have belonged to a neighbor). While the emotional ground-tone of the game comes through pretty clearly, there is scant narrative foundation to support it.

I would say that the game opens up more on subsequent playthroughs, but it kind of doesn’t. Unless you skipped a few steps and bolted straight to the end your first time, a deliberate but still casual player can do almost everything in the game easily in under an hour. That means for players like me who went over the whole world carefully right off the bat, hoping for more your second or third time through can feel a bit like diving into the shallow end of a pool. In this respect, Home is Where One Starts… plays like an early experiment in a genre of videogame narrative that has already seen some very sophisticated entries. Games like Gone Home and P.T. set a high standard for what designers can do with environmental storytelling, and as moving as Home is Where One Starts… can be, it doesn’t quite measure up. Still, you have to hand it to the game’s designers:  Setting aside just an hour of your time for this game will earn you a gorgeous farm to explore, a sober meditation on memory, and a touching (if vague) story about innocence and hope.