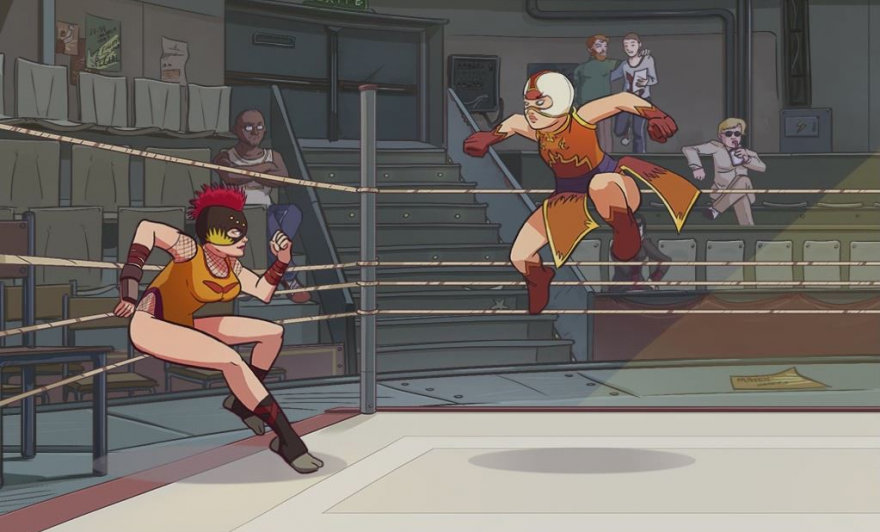 Honey Rose: Underdog Fighter Extraordinaire is what happens when you combine a traditional animation style and with genre-bending game challenges inspired by wrestling/lucha libre. Developed by Pierre Sylvain, Honey Rose: UFE is a life management simulation, presented as a visual novel with beat’em up segments. The protagonist is a student trying to balance studies with becoming a wrestling champion. Most of the game takes place in the visual novel/life management format and is driven by choices over balancing activities, and responses to situations. The beat’em up segments, split between tournament matches and street brawls, are less about combos or timing, and more about proper stat management and showmanship.

the spirit of the game extends beyond it’s mechanics

However, the spirit of the game extends beyond its specific actions. The idea for the wrestling protagonist came about in 2013 when Sylvain did an illustration series called “Fictional videogame heroines ABC” which highlights the need for more diverse videogame protagonists. The desire for greater diversity shines through not only with the game’s protagonist Honey Rose, but also in the conceptualization of the other characters in the game—most of whom are women and/or people of color.


As much as representation is something the game takes seriously, there aren’t modes for you to customize the main character, as Sylvain clarifies to Siliconera“…though you have control over her stats, and sometimes dialogue, she is her own character. There is no physical customization, and most of the time she’ll even decide what to say on her own. By making series of choices, you can affect how she ultimately reacts to some situations, but you won’t be able to straight out choose things out of line with what you/she did up to now.” This highlights how the player is not so much playing as Honey Rose, but rather acting as an advisor of sorts.

The struggle of managing demands from friends and family and achieving your own goals is central in this game. Regardless of the details, all of us are familiar with trying to balance different aspects of our lives, especially in early adulthood. This is a time where we are often both unsure of ourselves, as well as ambitious and hopeful for our futures. Honey Rose: Underdog Fighter Extraordinaire gives you the ability to guide a character through that process, and hopefully, kick some ass in the process.

Honey Rose: UFE is currently on Steam Greenlight. Be sure to keep up to date with Pehesse’s work and the game’s progress on Tumblr and Twitter