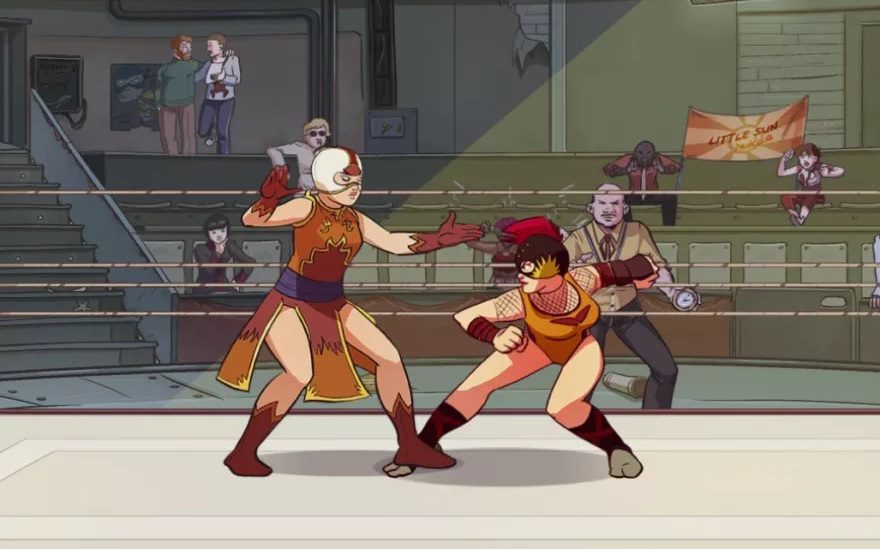 I relate a lot to Honey Rose. Or, at least I did back when I was a scrappy university student. While Honey moonlights as a masked luchador fighter in addition to being a college student by day, I juggled school, a job to pay the bills, and a far more time-consuming job that paid zero bills (campus publication editor gigs will do that to you). Like Honey, not everything went right. Sometimes I did poorly on tests because a deadline was approaching for the magazine I was art director for. Other times I’d slack off in one of those two, because I had to work long hours to make rent. University was hell, basically. I always wished I had more hours in the day. And frankly, Honey probably wishes for that too.

Honey Rose, or “Red” as she’s referred to outside of her masked moniker, is the star of the new visual novel life simulator beat ‘em up hybrid called Honey Rose: Underdog Fighter Extraordinaire. The game is what you’d expect out of the life simulator genre, wherein you manage a person’s life to make sure they succeed. Except for when the game throws curveballs to put your routine out of whack (plus the whole lucha libre fighting aspect I guess, which is easily a first time addition for the genre).

Instances where life surprises you made the game feel relatable

In one particular instance, I directed Honey to train with her coach because her defense meter dipped, only to be mugged and have my suit stolen along the way. My spare time after that was shifted to studying and, well, finding Honey’s lost suit. Luckily I got it back a day or so later after throwing a few punches. It was instances like that where life surprises you (and fucks up your day) that I felt the game be the most relatable.

But then the unrelatable stuff kicks in, or at least unrelatable in the literal sense (not the “I have too much to do” way). What sets Honey Rose apart from other life simulators is its beat-’em-up components. I mean, you are playing as the conscience of a secret luchador fighter after all. Fighting in (and sometimes out of) the ring is bare enough. There’s grapples and dive kicks, with some special moves thrown in. Choosing to play the game on a keyboard, however, seemed to doom me in the fighting portions. Or maybe I’m just bad at fighting games. It’s probably more the latter than the former. Alas, I almost wish that the fighting was dumbed down a bit more, being that despite training frequently, I lost more fights than I won. But maybe that’s the punishment I deserve for choosing the middle-tiered difficulty in the opening, rather than the beginner, story-focused mode.

Despite being touted as a visual novel, I found the visual novel portions of the game to be the least enticing. While I enjoyed Honey Rose as a tough-as-nails, determined character, I never found the stories surrounding her to be particularly interesting. I appreciated the diverse cast (consisting mostly of women and people of color), but they never expressed personalities that I was dying to get to know better. So I was shitty, and blew off hanging out sometimes because I felt like keeping my stats balanced was more important. For a visual novel, the actual reading was a chore. And that’s a bummer.

failure is the omnipresent enemy

There aren’t any numbers on the meters in Honey Rose, making cataloging how well you’re doing in school subjects and fighting stats-building a struggle. This is intentional, meant to actually mimic how tenuous progress in real life is. Unfortunately, I found the lack of progress-tracking to be more annoying than immersive. I ended up longing for the experience I found in games like the Persona series, whose meters made later decision making a much easier—and enjoyable—process. Where balancing life was still a difficult, engaging task, but felt more worthwhile because I had an end goal in sight. Honey Rose negates this for realism’s sake, which I can’t help but commend, even if it hurts the game’s mechanics.

On the surface, I found Honey Rose similar to other life simulators like Long Live the Queen (2012), which was actually an influence according to the game’s creator Pierre Sylvain. In Long Live the Queen, merely living to being crowned queen was the primary goal, but death snakes its way in as a looming presence. In Honey Rose, failure is the omnipresent enemy. And the road to succeed is never easy.

Overall, I enjoyed Honey Rose. Its animated art style makes it look often like a lo-fi cartoon, rather than any ol’ videogame. Its style is unmatched in the life simulator genre—which mostly consists of anime and manga-inspired art. While the in-game fighting wasn’t fun to engage with and the characters a wee bit bland, it’s overall a worthwhile game to check out. And hey, hopefully we see more creative hybrids like this starring diverse casts in the future. I’m always down for more laid back games about stressed-out young adults chasing their dreams, because that’s me. Right now. Here. I like seeing myself in games, and I’m sure you do too.

Honey Rose: Underdog Fighter Extraordinaire is available now on itch.io and Steam per a Pay-What-You-Liked model. To download and play initially it’s free, and if you liked it, you can toss the creator a few buckeroos (which is the decent thing to do, in my humble opinion).