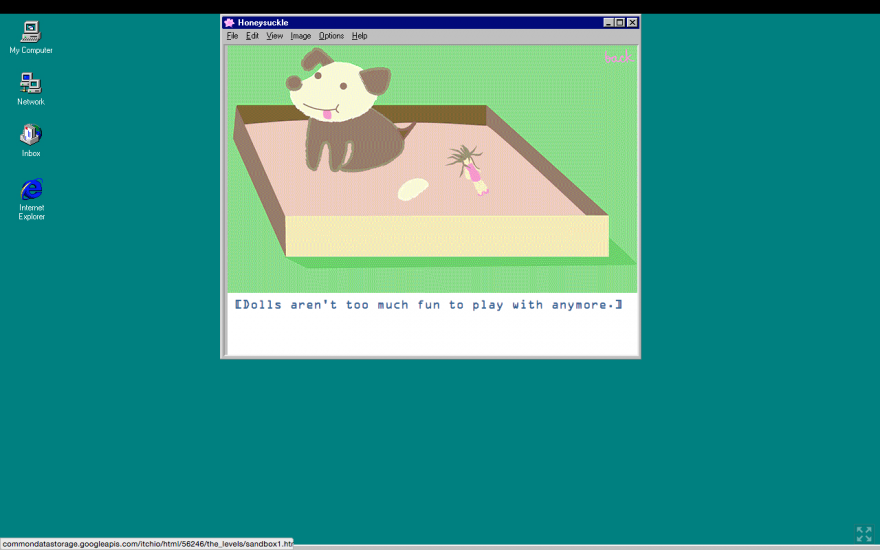 The FEMICOM Museum, and by extension the FEMICOM game jam, celebrates a nostalgia for the childhood videogames we too easily disregard and forget. While MegaMan and Metroid continue to generate pixelated clones to this day, the impact of the female-oriented games of the ’80s and ’90s are instead waved away as frivolous.

Though we continue to go to painstaking lengths to analyze and recreate the male-targeted NES games of yesteryear, the incredibly successful female-targeted videogames of old are lucky if they even get a footnote in gaming’s history. But FEMICOM, and its founder Rachel Weil, believes the history of feminine games, software, and hardware deserves the same reverence as any other beloved childhood game. So, to promote the museum’s newly renovated website, Weil is hosting a game jam from now until May 5th that honors feminine games through a theme entitled “Here’s to Theresa Duncan!”

lucky if they even get a footnote in gaming’s history

Game designer Theresa Duncan contributed three remarkably imaginative CD-ROM games during the “pink” craze of the ’90s. While most other female-targeted videogames of that time were blatant Barbie dress-em-up clones, Duncan’s adventure games told intimate and kooky stories about being a kid who also happened to be a girl. Teaming up with Rhizome, who’s running a digital preservation project for Duncan’s three CD-ROM games (Chop Suey, Smarty, and Zero Zero), Weil hopes the jam will help the female-oriented creators of today reconnect with the often overlooked feminine games of our past.

To kick off the jam, Weil published her own entry: a somewhat autobiographical story entitled Honeysuckle. Bringing metanarrative to nostalgic games, Honeysuckle‘s main action is framed by an old Windows desktop background. The Duncan-esque visuals are windowed next to a My Computer and Internet Explorer shortcut, the soundtrack (by Robby Kraft) communicating a kind of whimsy offset by an undertone of loss.

Paying homage to Duncan’s balance of the serious and silly, Honeysuckle presents a coming-of-age tale that isn’t afraid to dip into the darker crevices of poignant adult issues. Taking place in the unidentified protagonist’s backyard, her innocent interactions with neighbors across the fence become increasingly desolate, as more disappear with each revisit. In one moment, a too-cool high school girl smokes cigs while hanging off a tree, teasing her prepubescent admirer below. In the next, she’s gone, leaving behind her ever lonely admirer—your conversation with her echoing inside your head, as you wonder about the boyfriend she loved to mention, and the bruises she blamed on climbing trees.

Honeysuckle captures the changes and losses you barely notice as time slips by in the whirlwind of growing up. There’s a tangible absence to every backyard interaction, not only with the inevitable disappearance of each friend, but with the objects of childhood too. A discarded doll in a pink dress lies rejected in the sandbox, the protagonist asserting that she is far too grown up to play with such a girly toy as she wonders whether she can trade it for baseball cards.

The disconnect evidenced in the protagonist’s relationship to her girl toys echoes sentiment’s Weil has expressed to Kill Screen in the past. “At a certain point in a girl’s life, she rejects those toys as being inconsequential, inferior, or superficial,” Weil explained about girly childhood videogames. “It seems somehow encoded into feminine toys. It’s obvious that they’re not for boys, but at some point they also stop being for girls. Women participate in this odd disconnect while reflecting upon their childhood. I became this anti-girl at one point myself, and only wanted to hear about boy stuff and boy hobbies—because I thought that was how people would take me more seriously.”

Weil’s jam entry distills the essence of what FEMICOM hopes to counteract: this rejection of feminine play objects, which, in the end, only serves to disconnect us from our own pasts. By helping new game-makers reconnect with our forgotten feminine game-making history, the FEMICOM jam forges a whole host of new connections, between women and the girly toys we felt we must reject—and between those who love gaming but never had the chance to marvel in its feminine past.

You can play Honeysuckle in your browser. The FEMICOM game jam ends on May 5th. Be sure to check out the FEMICOM Museum, which explores the long and wonderful history of femininity in computing.