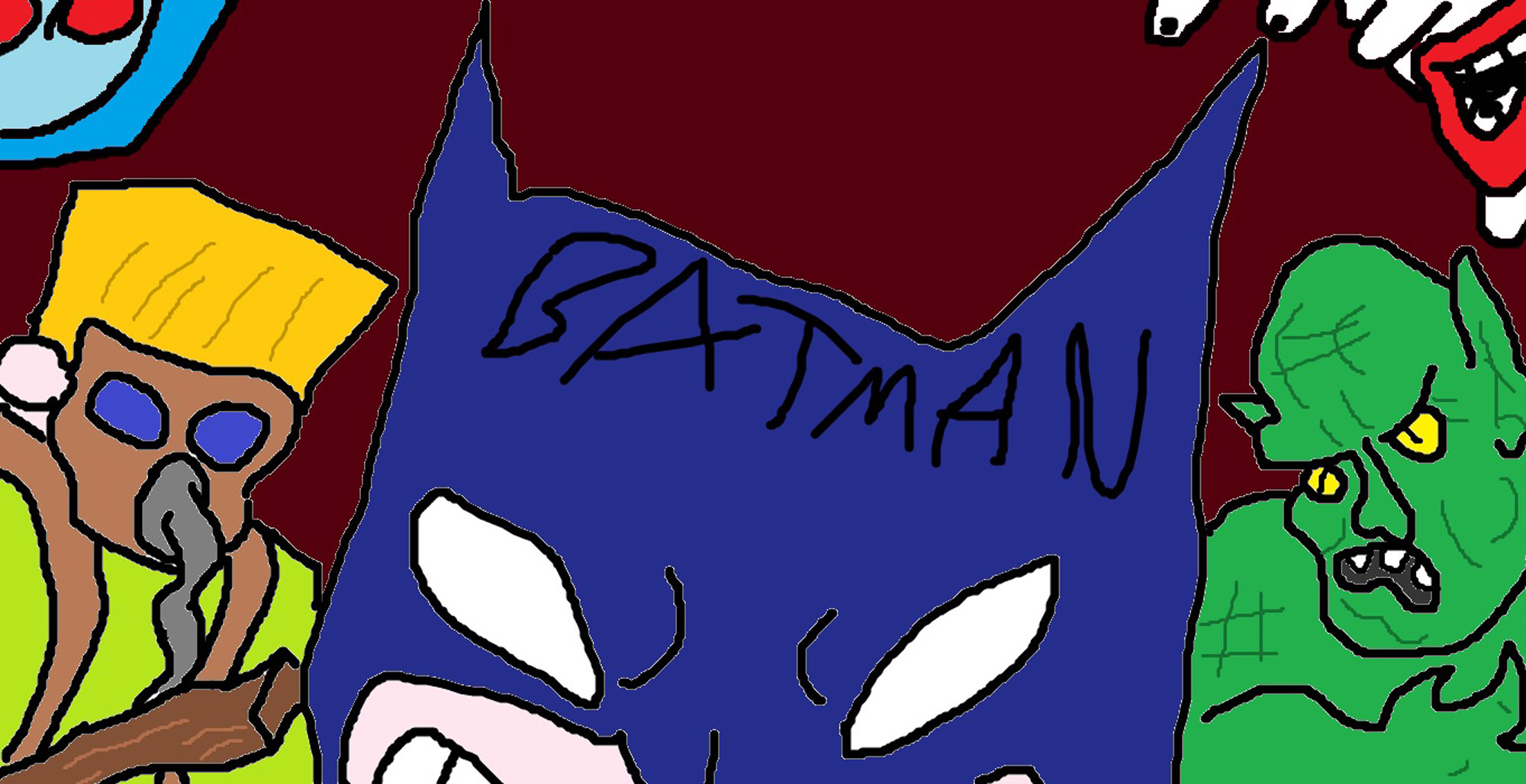 I have to give it to Batman. I knew his job had its pitfalls, its risk factors. You never know when your day might get cut short by a tank full of sharks, or being impaled by an umbrella, or being doused in space acid. But I never stopped to consider the more pedestrian dangers in the life of the caped crusader.

Now, I did go out of my way to play “the worst” Batman game. It’s what I asked the store clerk for; I said, “I want the worst Batman games you have, sir.” They Googled up a list claiming that Acclaim’s Batman Forever has that crown. No, no. Been there, done that, rented it from Bonanza Video back when. I knew that game was broken, unplayable. In honour of what is either the best Batman game or the not-best Batman game coming out, I wanted to play something that made me regret the time I’d pour into it.

There were two things that struck me about Batman: Dark Tomorrow’s box. One is that the art made Killer Croc look just like Piccolo, and that the back description used the word “miasma” to describe the villains. Released by Kemco in 2003, it’s a very pre-Arkham entry for Bruce Wayne, from a time when the game-playing public believed that Spider-Man was the masked vigilante who got the good games and no one else.

By the time I had reached the GCPD, I probably died about 30 times

It is a dire night in Gotham. Three bandits rob a convenience store, calling the owner “pops!” in a way that sounds like they’re running home to see “ma!” But they don’t get far. Pinned in the alleyway by the Batman, who you then take control of, the goons are shin-kicked and sucker-punched until they collapse to the floor. Before getting up again. And again. And again and again, because they’ll only stay down, apparently, after they’re bat-cuffed.

Then the bat-signal stamps the sky, and the real danger begins: jumping from rooftop to rooftop. Jumping from one building to another is dangerous. In any action film that’s hired a parkour-savvy stunt double, the music will cut to a simmer and the shot will slow down, so we see the hero floating in the sky momentarily over the alleyway below. In superhero adventures, this is less of a thing. Big jumps are just part of the gig. Be it a Hulk game or a Batman game, launching yourself to another perilous platform is a button. Dark Tomorrow says: no, no it isn’t. That’s the game.

Even with a double-jump, Batman cannot just hop between buildings. He needs to position himself just right, a task that takes some finesse when the push of the joystick equals four steps and the camera has a Resident Evil-style agenda of its own. Then you need to take out the bat-claw, which swings you forward, and which is not to be mistaken for the grappling hook, which lowers you up and down, as similar as they may seem. Not to mention all your gadgets are shaped like fucking bats. By the time I had reached the GCPD, I probably died about 30 times. When he falls, Batman goes into a stiff limp, his arms and legs straight up like a baby expecting to be caught, and it’s game over. I don’t even know what’s going on in Gotham that needs my attending. Does Batman remember all the times that he’s died? If Gordon told him that the signal went on because of an electrical hiccup, would the back of Batman’s eyes burn with all of the versions of himself that didn’t make it there? Alternatively, did he ever die? Or did Batman land safely on the ground, march right back up to that same rooftop to give’er another go, too stubborn to walk or take an Uber?

Dark Tomorrow is the mysteriously atrocious kind of game we don’t see these days. Blockbusters that flop are usually just “not great” or offensive to other senses, and games that are a hot mess are celebrated as schadenfreude. But the game has very consciously introduced ideas that are detours far and away from fun. There are locked doors that have to be opened with a “universal bat-tool,” which you always have and just makes some gates require an extra step. Every thug needs to be cuffed; when there’s a big pile of knocked-out bodies on the ground it would be hard to tell if you’ve saddled them all if the music didn’t blare a Chris Carter-y synth jamboree whenever there’s the slightest possibility of danger.

Thankfully, the bosses only get easier. I don’t think I could have handled multiple Black Mask affairs. In a large, dark warehouse you have to sneak up on him or else he’ll unload a river of bullets into you, but, unable to control the camera, he’ll always be able to see you before you see him. I ended up doing this David Wain-y routine where I jogged in circles clocking him at every pass. He has about 600 health and each punch reduces that by ten. Runner-up to this experience was the fight against Ratcatcher, whose giant rats tripped me to death repeatedly. Ratcatcher doesn’t fight you himself, despite carrying a big stick. Comparatively, I almost felt bad for Killer Croc and Zsasz, who got locked in my animation cycles and never had an opening to knick me. With Croc there’s a chest-high platform you can stand on that’s above the water, so it’s impossible for him to drown you, which is his special thing in the game.

You can probably just assume the story is bunko. Black Mask and The Ventriloquist are warring over something Ras Al Ghul arranged for a revolt at Arkham so he can take over the world somehow; if you lose you are just told he’s taken over the world. The only compelling plot point is that Gordon goes missing, though the evidence that sparks the panic is that he isn’t answering his calls and a joker-less deck of cards is found on his desk, which could have also meant he went to see a movie and was earlier playing one of almost every game of cards.

While at the video store, I also plucked out Ubisoft’s Gotham City Racer, curious to see at what point Batman ceases to pursue Mister Freeze and instead decides to do a few laps with him. “Please,” cries Commissioner Gordon, “arrest the Joker, Batman, he has killed so many innocent people.” “No,” snarls the caped crusader, “we’re only halfway through the cup and I’m not going to give him the satisfaction of a draw.”

It isn’t that—there isn’t any actual racing in it. You rush to and through several indistinguishable maps with roads that share the same colour as the draw-distance fog, divvied up by clips from the animated series. The first mission plays a bit from Tim Drake’s origin story, Two-Face about to shoot lead into the would-be Robin, when the clip ends, transitioning to you rushing from the starting point to the docks, changing back to the cutscene where Batman got there just in time to throw a batarang at the gun. I think in the cartoon Batman was already there.

These are not the things we want to do as Batman, but these are certainly the things that Batman does. If there is a crime across town, he obviously needs to get across town, and just like the ever-present threat of getting the door-prize on your bike, there are dangers to every commute.

In fact, in the Arkham games, and every open-world superhero adventure, you still do these things. You swing or swoop over and between buildings, the majority of your play time immersing yourself in their metropolises by moving through them. In Arkham Knight, you even get to drive the car, and all the mayhem that promises. Grappling, driving, even arresting (which you also do in Arkham Knight by escorting crooks to jail) are all part of the job. The Arkham games, as they progress, try to present every bat-thing at the same bat-time, resulting in a compiled bat-game that broadens itself out of its own bat-identity, trying to be the bat-thing that everyone bat-wants and becoming a bat-stew.

Somehow, when presented independently, these selling points become chores, because you aren’t volunteering to hand-cuff or jump rooftop to rooftop, you’re dictated to do so. In these instances, it just feels idiotic.

Oh, plus the games suck. They’re bat-shit. You might call them guano.