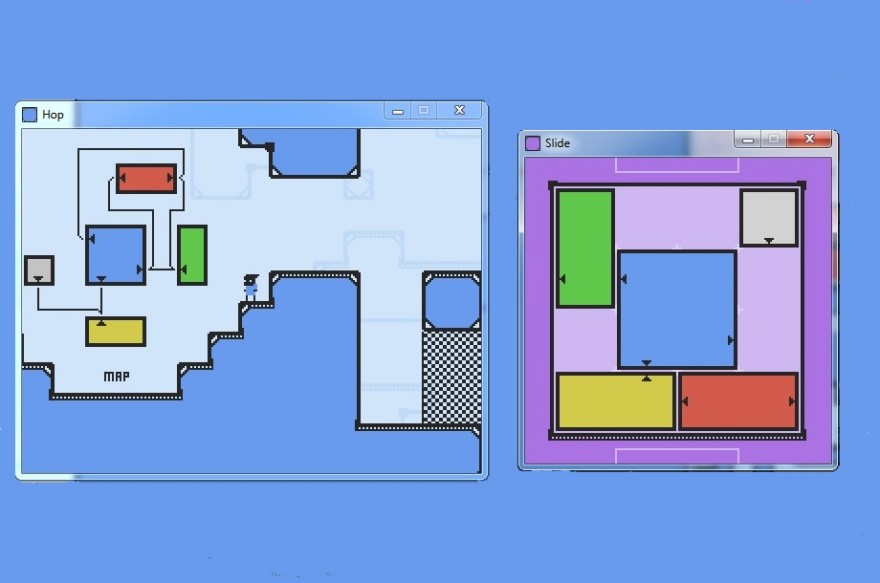 Daniel Linssen seems to be on a roll this year. He’s been popping out engaging arcade games every Ludum Dare game jam, racking up a library that includes the punishing throws of Javel-ein, the bloody exploration of Haemo, and Roguelight‘s spooky cavern descent.

Then, of course, he’s working on expanding the tricky, Ludum Dare winning, momentum-based platforming of The Sun And Moon in order to bring it to PC and PlayStation Vita as his first commercial project. That’s only the ones that have appeared on Kill Screen, too—trust me, there are more small games grafted by his hand in between those releases.

it requires some out-of-the-box thinking

Speaking of which, Linssen has just released yet another, or should that be another two? Both are correct. You see, HopSlide isn’t quite what it appears to be at first. That is, as Linssen describes, two games (Hop and Slide) that are “definitely not connected in any way.” Sure they’re not, Linssen, sure. I believe you.

Evidently, he’s lying. If you open up Hop by itself you’ll probably last about five minutes before realizing that something isn’t right. You can jump around the floating platforms inside this little blue world, bouncing on springs, and accidentally dropping from great heights, but there’s nowhere to go. There is, however, a mysterious map room to investigate. Wait a tick…

Yes, if you also open up Slide then you’ll see the blocks that depict the rather confusing map in Hop are the same ones you can move around inside this sliding puzzler. It may take you a while to work out what’s going on here. Mind you, if you’re the kind of person who can only operate in a multi-tabbing browser, or that frequently switches their attention between a smartphone and where you’re walking, it should be pretty obvious. As some smart alec would no doubt say: it requires some out-of-the-box thinking (if you haven’t got it by now, beware, there are spoilers below).

Through some immaculate computer wizardry, Linssen has created two games in separate windows that interact with each other. What you should have realized is that the blocks in Slide correspond to the rooms you move around inside of Hop—they’re matched by color. You need to join the blocks up as the map shows in order to move between each room.

That’s only the beginning of HopSlide, too. Your task is to enter each of the six rooms to collect a letter. To proceed through each room you need to discover how else these two windows are connected. To say any more would be to spoil the experience but you can, at least, tease yourself with pre-emption by thought-staring into the gif above.

You can download HopSlide for Windows for free on itch.io.