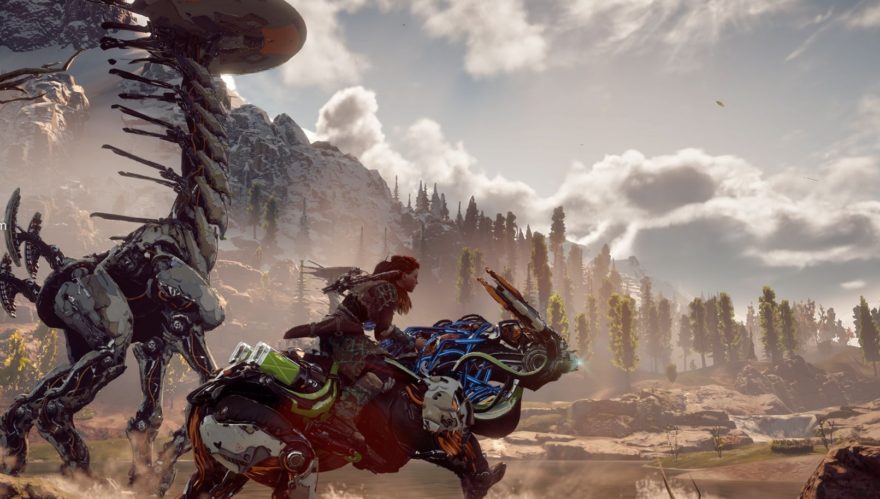 Horizon: Zero Dawn, which is probably better remembered as “that dino mech archer game,” was among the games displayed at yesterday’s Sony E3 2016 conference. It premiered a whole eight minutes of in-game footage, in fact—I know, very fancy.

It follows the story of a hunter named Aloy as she seeks to uncover what happened to her world. We might question the same thing. Consider this: the world of Horizon belongs to the hunter-gatherer era, but is accented by large mechanized dinosaur-like creatures that look as though they fell out of an anime rather than prehistory. Just what is going on here?

This rather bizarre mixture of technology and primitive times means that Horizon: Zero Dawn feels like a combination of a classic fantasy adventure novel—with Aloy leaving a peaceful valley much as Bilbo Baggins left the Shire—and a 1980s pulp post-apocalyptic film, albeit with higher production value. Aloy is outfitted in furs and braids, but she also has a mechanized exploding bow and rides a mech steer through a lake with large creatures that look a lot like a brontosauruses (brontosauri?).

As Clarke’s law states: Any sufficiently advanced technology is indistinguishable from magic. This feels like the case in Horizon: Zero Dawn; the game is high fantasy, but with the magical creatures replaced with glowing red mechs. In a world of primitive and wild tribes, what is more magical than machines that corrupt at a touch, even if they do so with programming and wires rather than actual magic?

Horizon: Zero Dawn is set for release February 28, 2017, and will be a PlayStation 4 exclusive. You can find more information about the game on its PlayStation page.