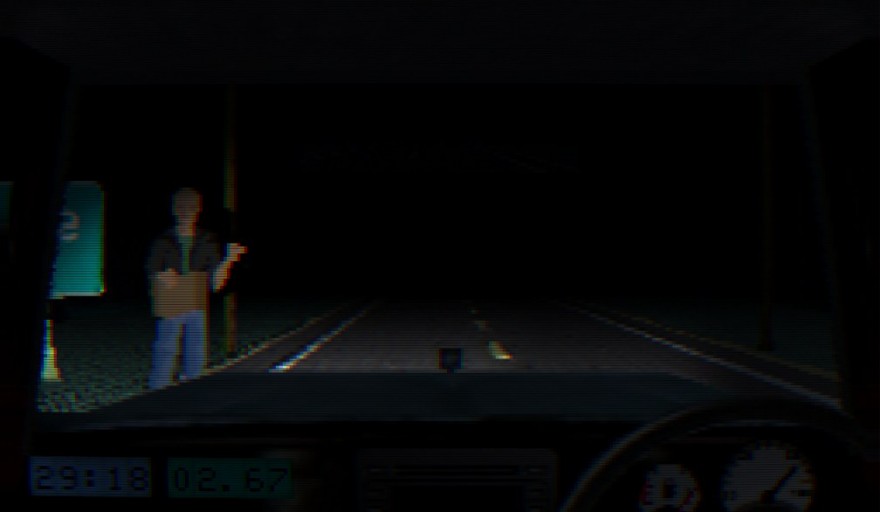 There’s something existentially terrifying about driving at night. For my money, it has to do with that unpleasant combination of velocity and darkness. The swath cut by your headlights is only enough to catch fleeting images. Is that a hitchhiker you see on the side of the road, or an unnervingly convincing scarecrow? The red eyes in the darkness ahead might be the taillights of a truck, or something much worse. Like any great horror film, a highway at night gives you only glimpses of what’s actually there; it lets your imagination do the rest.

I should mention here that, actually, for me, all driving is pretty terrifying. Being a life-time public transportee, I never got around to learning that particular skill, so if I’m behind the wheel of a car something has already gone horribly wrong. But that’s where I find myself in Dead End Road, a game about the worst road trip ever.

it’s important to keep your eyes on the road

You, the driver, have conducted a forbidden ritual of the blackest magics in exchange for one granted wish. Without even the decency of providing a Monkey’s Paw triplet, the dark powers granting your request begin a hot pursuit for your immortal soul. Unless you can backtrack to the witch who helped with the infernal spell and get her to undo the mess you’ve made, there won’t be a return trip.

Your tormentors won’t give you up without a fight, though. Alongside the ordinary life-threatening dangers of a nightly drive, your trip will include ghostly apparitions, gruesome visions, and various other paranormal phenomena. But it’s important to keep your eyes on the road while battling the forces of darkness; focus too much on getting the radio to stop satanically burbling and you might find yourself in a head-on collision with a truck.

While there aren’t any dates mentioned in Dead End Road, it feels grounded in a previous era, from the fuzzy film grain to the paper map on which you navigate your hellish journey. The late night pharmacies cement the retro aesthetic, selling you quaaludes over the counter—which, of course, turn out to be the best antidote for stress brought on by demonic possession.

Dead End Road sometimes gets a little gauche with the visions of grotesqueness, or a ham-fisted attempt at breaking the fourth wall. But it can be celebrated for its simple touches that, as always, are the most effective. Your headlights flickering as you turn into a long cornfield or a maze-like row of dark houses. Something in your rearview mirror that wasn’t there just a moment earlier. It’s the creeping fuel that lights your terror.

You can purchase Dead End Road on itch.io.