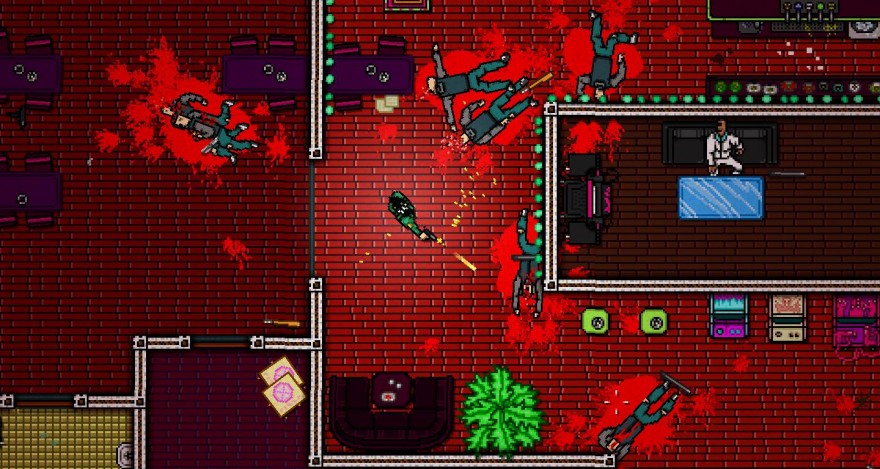 2012’s Hotline Miami arrived fully-formed like Athena from the head of Zeus. It was a paranoid high of a game that gave tightly-wound arcade shooting a jolt of queasy, feverish surrealism. Like Super Meat Boy, it leavened its unforgiving shootouts by letting you instantly start over upon death, meaning that a botched level could immediately be given another go. This death-life loop made the game’s twitchy toughness—you can’t take more than one hit before dying, and everything moves in a coke-driven rush—a gratifying puzzle, rather than a frustrating morass of loading screens and unskippable cutscenes. The music didn’t hurt, either: all throaty synth bass, thudding kick drums, and pulsating leads, it gave a woozy synthwave sheen to the game’s grindhouse filth.

In the end, it also whiffed on a Haneke, trying to implicate the viewer/player in the fictional violence: as in that director’s Funny Games, Hotline Miami asks who the real killer is. Could it be you, player? Check your hands for blood! It was a weak metafictional feint that I charitably chose to interpret as a gag, because the secret ending to the game (achieved by solving a … word puzzle) tacked on a dense comicbook mythology about a terrorist group called 50 Blessings that the protagonist, not without a wink to the audience, shrugs off as inconsequential bullshit. Clearly, the people behind this game would choose self-aware over self-serious, right?

Self-awareness persists in Hotline Miami 2: Wrong Number, but it’s more reflexive than lighthearted, examining itself in a critical light: full Haneke rather than half-Haneke. There’s just more to this game, and the ultraviolent lark of its predecessor becomes an elliptical, nonlinear narrative that boils backstories, exposition, conversation, and mythology into a dense dark soup.

This isn’t just bigger, though; it’s not just an IMAX version of Hotline Miami. It’s less “fun” in obvious ways, less accommodating to the player. The first game was easy to hop into, giving you lots of freedom in your approach to a given level: you could bait white-suited henchmen into rounding a blind corner and club them over the head with an iron bar, or you could nab one of their assault rifles and go from room to room spitting bullets. You could further personalize your approach with masks, which gave you special powers or restrictions; funneling your play down a narrow chute.

Hotline Miami 2 trades that freedom for a rotating cast of characters, each of whom is effectively a “mask,” coming with different abilities: one can’t use guns, one can roll, and two—delightfully—come as a gun-and-chainsaw pair that pirouettes through hallways coating every possible surface in gore. This forces you to adopt a certain style to clear a given character’s level, literally allowing you to become them on a mechanical level. It’s elegant in that way.

Unfortunately, the narrative itself isn’t nearly as well-executed. All its failures are apparent in the first scene of the game, a vignette that infamously includes a brief rape scene. The opening sentence of a book, the first shot of a film; they’re a declaration of style, a chance for a grand flourish or a subtle cue.

So it’s not promising that before release, comments by critics who saw an early version led developers Dennaton Games to create a sexual violence toggle; you now have the option of skipping this scene entirely. For what it’s worth—I am loath to lay out a taxonomy of sexual assault—the scene ends before the rape itself.

The narrative itself isn’t nearly as well-executed.

The obvious line to take here is that if the player can skip your rape scene, maybe it wasn’t necessary to begin with. But that’s too easy. Victims of sexual assault presumably have no desire to see any rape scene, no matter how Thematically Important. Watching grimy Aussie western The Proposition with my girlfriend a while back, she insisted we skip past a rape scene near the end of the film. I didn’t even remember the scene existed: to me it was just another tick on the film’s “ugliness” checklist. Dennaton’s concession is thoughtful enough, a step beyond the old “Some parts of this game may be considered violent or cruel” trigger warning from the Silent Hill games.

Of course, allowing the player to skip a single seconds-long scene of sexual assault is maybe a myopic concession given the tremendous amounts of gore-soaked murder splattered all over the game. But tearing a guy’s head and spine out of his body like a bloody weed is a gross (no pun intended) exaggeration; rape is a thing that happens all the time, to actual people. You really need to consider what your intent is; you need to be able to back it up narratively and thematically. To their credit, the developers have spoken about their intent here and they didn’t deal this card lightly. This wasn’t a superhero comic moment; they understood the implications.

But their mistake was placing it at the start of the game, before we have time to understand the context and the characters. They pack a lot of nuance into their reading of the scene, and given both its brevity and its position in the narrative, it’s hard to unravel it like that from the outside. It hardly sinks to the level of Far Cry 3’s Creative Writing 101 treatment of racism and white savior tropes (and Alice in Wonderland), but it does require basically being the people who wrote it to understand it.

The scene around the rape does set up the psychosis of one character, a fellow named Pig Butcher. He’s an actor, and the rape scene is being acted out for cameras—or is it? The film set motif recurs throughout with Pig Butcher; he is unable to distinguish reality from fiction. This evokes Satoshi Kon’s Perfect Blue—in which a rape scene shatters an actress’s psyche—as well as Lloyd Kaufman’s cogent analysis of Ruggero Deodato’s Cannibal Holocaust, in which Kaufman argues via Pudovkin’s theory of montage that Deodato uses footage of animals actually being killed to condition viewers into accepting his staged violence as real.

A slightly more canonical analog is Gaspar Noe’s Irreversible, which saps the joy from the rape-revenge narrative by presenting it in reverse; showing us horrific, decontextualized violence and sexual assault and then ninety naturalistic minutes of the lives that were destroyed.

The throughline here is that these are works in which treatment of horrific material, cannibal-related or otherwise, is given a whole lot of thought. It means something. It’s central to the work. The rape scene in Hotline Miami 2 isn’t really about the woman being raped, or rape at all; it exists to set up a schism between reality and fiction as one of the game’s major themes. That the woman gets an appropriately ambiguous revenge later—shooting Pig Butcher with a prop gun that turns out to be fake—doesn’t entirely wash the ugliness of that first scene off, especially since that plotline is a brief one. It’s over quickly and situated among numerous other sketches of cartoon nihilism and brutality. There’s not even the tonal juxtaposition that would allow for black humor in Pig Butcher’s fate; it’s just diluted, muted, one drop of blood in an ankle-deep pool of the stuff.

Perhaps if you care deeply about the lore of the Hotline Miami series, the story will resonate with you. It seems to place its faith in that invested player, the player who showed up not for the throbbing waves of murder but for the preposterous exploits of “50 Blessings”—if you’ll recall, the same Cannon Films dogshit that was tossed-off as a “waste of time” in the first game’s ending! It feels like a deliberately self-sabotaging move, a middle finger to the audience. Sure, the first game had its meta moments, as when a pair of “independent” janitors take credit for the game’s events as stand-ins for the developers, but in hindsight the crucial line in Hotline Miami was “I don’t care about politics.”

That fuck-exposition attitude now seems less a self-deprecating jab at the ludicrous nature of the game and its diegesis and more like a dig at the bloodthirsty player with no interest in narrative.

Hotline Miami 2 cares deeply for politics. It wants to make its brutality meaningful, to say something about media and culture and desensitization. But its sprawling narrative only shows that it has forgotten its own lessons: the way Hotline Miami plays, its spatial violence puzzle, is what Hotline Miami means. Its lessons were in those lucid moments where the music dropped to a low-level drone and you trudged back through the ruined corpses of your foes to exit the level. The questions, the answers were all there: those moments of terrible ambiguity were deliriously effective. They were Haneke moments executed with perfect grace. Eschew the collectible hunt in the first game and in the end all you get are the creators laughing at your need for closure before tossing off a Robocop quote.

This time, they sit you down and insist it all really matters. It doesn’t, and maybe the game does know that. Maybe it curdles the stripped-down template from the first game into complicated hallucinatory bullshit just to prove how easily it all falls away when it’s just you and a building full of goons.

All that matters is that moment when you’re two floors deep into an endless gauntlet, white-knuckling an intricate maze of shotgunners, dogs, fat guys, and knife guys, flitting in and out of cover, extending yourself ever-further along an uncertain tightrope, elation and frustration raising your heart rate—and then you’re taken out by an offscreen gunshot. Your character crumples to the floor, bleeding profusely. Fuck this, you think, what a cheap fucking death.

But then you’re back in it. The music is an endless, vibrant wash of noise. And this time you know in your bones how to clear the level. You are the Terminator storming the police station.

You like this shit? it asks. Here’s more of it than you ever wanted. Okay. Just one more hit.