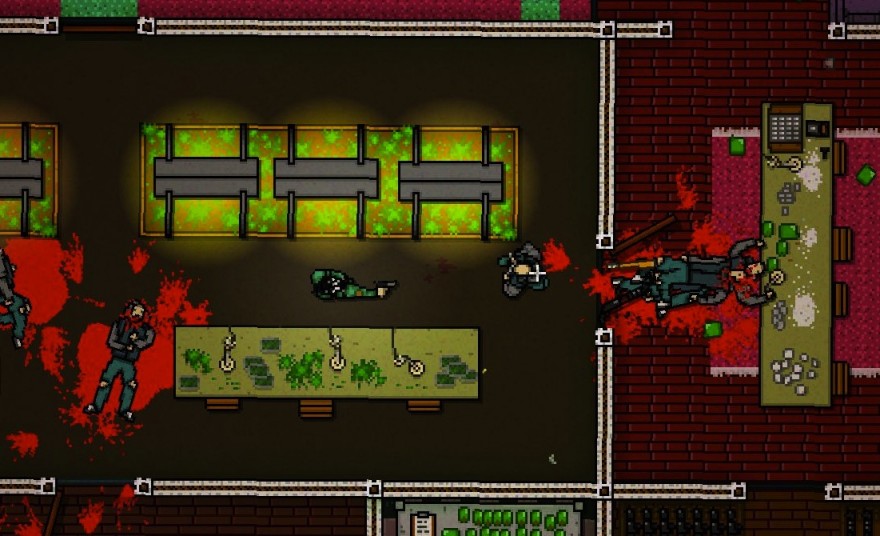 Hotline Miami is making it cool for kids to love violence again. Not just violence, but the embrace of simpler games, simpler times, and if what it showed at E3 at publisher Delvolver Digital’s event in the Hooters parking lot (really) is any indication, just plain simplicity as well.

Like its corresponding game, the map editor is barebones. Mario Paint comes to mind—not only for its spartan nature, but also because it is outmoded and proud of it. You can’t copy and paste rooms or larger chunks of levels; you have to painstakingly search for assets and plunk them in as you see fit. There’s a fair amount of customization (selecting the color of the bricks, the spawning points of enemies, etc.), but there’s no meta data for anything. If you want kitchen shit, you have to search “kitchen.” But you won’t, say, find “blender” or whatever by searching for “kitchen.”

“We wanted to show the basics,” explained Wedin. “A lot of editors cluster the features.”

That said, there will reportedly be YouTube tutorials forthcoming once the game hits to explain how it works.

Appropriately, there aren’t a ton of details readily available around the level editor just yet. Wedin commented there won’t be too much fussing around with curation or gatekeeping stuff. “You’re making levels for friends,” Wedin said. In other words, you won’t find levels curiously disappearing or getting flagged a la, say, Little Big Planet.

The level editor is intended as a gift to fans because, well, there won’t be any more Hotline after this, Wilden says. “Fans will make the next Hotline experiences for as long as they’re willing.”

But there are limits. The level editor is handicapped in a specific, interesting way: You can only make levels that feel like they belong in that universe. You can’t import custom songs. (And who would want to? The soundtrack is fantastic.—ed.) You can’t change the behavior of guards. They patrol. They get blasted. It is what it is, and it’s not a mod.

When asked to offer advice for other players creating their own levels, Wedin offered: “I like levels where you can walk through it stealthy… but don’t have to.”

Make of that what you will. Then share it with your friends when the game releases sometime later this year.