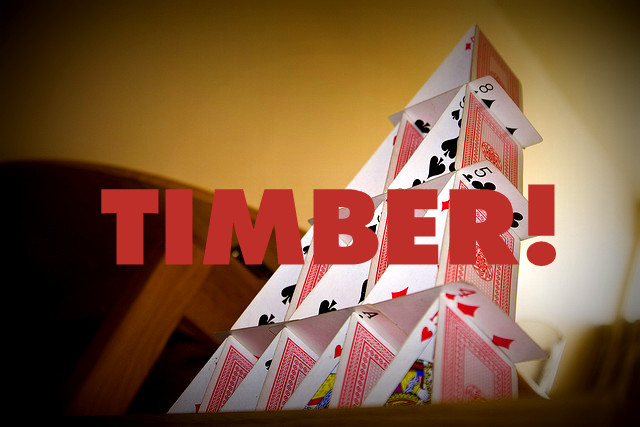 Looks like television producers are finally figuring out what videogame companies have known for decades: If you can make something yourself, why buy it from somebody else?

House of Cards is a 13-episode drama directed by David Fincher and starring Kevin Spacey. Twenty years ago, the star power and high production values would’ve made Cards a top-tier network show like NYPD Blue. Ten years ago, Cards likely would have landed on premium cable, next to The Sopranos or Six Feet Under.

If you can make something yourself, why buy it from somebody else?

Now, viewers can only watch the riveting polical thriller on Netflix, the video-streaming service that began fifteen years ago as a DVD-delivery operation. Its rampant success ultimately drove video stores like Blockbuster out of business. Their next target? Cable.

Tim Wu over at the New Yorker’s Culture Desk blog wrote about the shift as a pivotal moment in televised entertainment:

An Internet firm like Netflix producing first-rate content takes us across a psychological line. If Netflix succeeds as a producer, other companies will follow and start taking market share. Maybe Amazon will go beyond its tentative investments and throw a hundred million at a different A-list series, or maybe Hulu will expand its ambitions for original content, or maybe the next great show will come from someone with a YouTube channel. When that happens, the baton passes, and empire falls—and we will see the first fundamental change in the home-entertainment paradigm in decades

All of which looks a lot like what’s happening in the games industry already.

In one way, Netflix offering premium content on their own service resembles the prevalance of first-party software as a driver of consumer enthusiasm and loyalty. Nintendo’s games can only be played on Nintendo hardware. Sony has built a legion of studios devoted to publishing exclusively on Sony machines. These exclusives are a large weapon in the battle for player’s time and money. By no longer being entirely reliant on other studio’s content, Netflix can slowly branch off and gain more independence.

Wu questions who will remain standing in today’s “age of too much information, [where] offering more channels has come to feel like more of a bug than a feature.”

What the show really does is question the existence of the current king of home entertainment, the cable industry. The cable companies make close to a hundred billion dollars a year off our viewing. But if you don’t need cable TV to get good shows when they come out, just what are you paying for?

When big-budget games are available to play in your web browser, possibly for free, many players might ask “Just what am I paying for?”

Exclusivity has always been a weapon for entertainment providers, with cable and then premium channels like HBO and Showtime giving unfettered access to content not found anywhere else. House of Cards is a splash of water in cracked pavement; over time it could freeze, pushing the crack wider, allowing other content in.

Apple’s App Store works in a similar fashion by giving small-time developers access to millions of players, where before indie devs would have to go through the costly obstacles of major hardware producers (who also sell their own software). The same walls are falling elsewhere. When big-budget games are available to play in your web browser, possibly for free, many players might ask “Just what am I paying for?” When given the choice between Sony, Microsoft or Nintendo’s shiny new box, sold for hundreds of dollars each to play games at 50-60 bucks a pop, what do you think the public will choose?

Netflix’s first attempt at original content, Lilyhammer, didn’t move the needle as hoped. But Cards is an evolution of the model, simultaneously releasing all thirteen episodes instead of the traditional drip-feed offered by networks. Who has patience to wait a week between episodes anymore? Netflix energized the practice of marathon-watching old shows back-to-back; now they’re pushing it as the new normal.

Traditional game publishers are under attack from a similar shift in access. Studios used to building giant worlds for millions of dollars and releasing them every two to three years are under attack by an avalanche of cheap, high-quality releases weekly. Those already struggling to keep up with rising development costs and an impatient and fickle customer base should pay attention. The water is rising, and a coldfront is on the way.