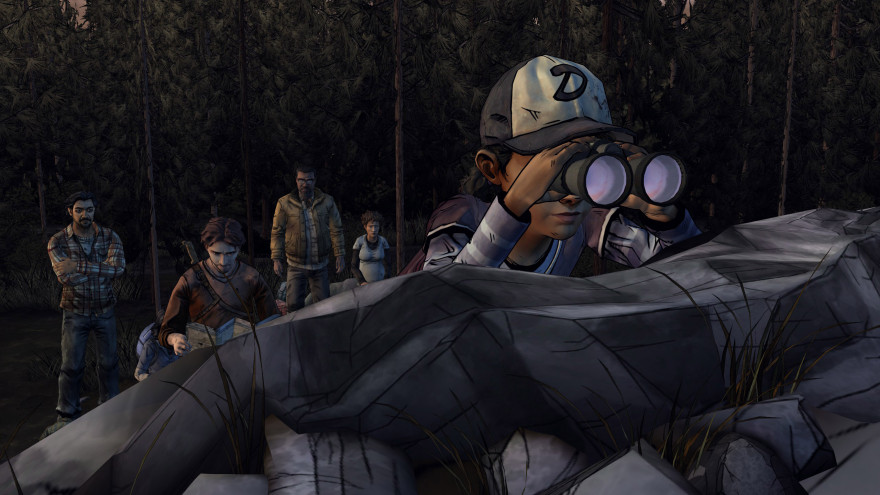 When playing through the second episode of The Walking Dead Season 2, something becomes apparent about what Telltale was trying to do for Clementine’s adventure; something that wasn’t so clear when playing through episode one. But talking about it requires bringing up some bitter memories about Lee.

The protagonist from the first season built up a strong and sincere relationship with Clementine, creating a father-daughter bond that helped to shape the girl and kept her mostly safe in the face of constant death. Therefore, it was made all the more worse when Lee (spoiler) was bitten and was going to turn in the game’s final moments.

Season two wasted no time reminding the audience that our ballcap-wearing survivor was alone, despite opening up hanging out with Christa and Omid and then hitching a ride with a new group that was introduced in the second half. We didn’t get much time with them, but we did come to realize that Clementine was going to be stepping into yet another conflict. We had the vague idea that somebody was after them, but didn’t learn much. A House Divided takes the things that were seemingly forgotten and delves into them to set up what Clementine’s story is really about.

In season two, hope is gone.

What seems like the central conflict of season 2 as presented in this recent episode is less about the physical danger known in a zombie apocalypse and more about the flaws and risks of a world without order, where people can run rampant to do what they wish to others and the all-important bonds you create are feeble and sometimes nonexistent. This was a prominent theme in the first season, but considering that the overarching plot was still about survival, it was kind of pushed to the background, where Lee’s decisions about who to rely on and who to save factored into his motivation for the survival of him and Clementine. The stakes were higher and the scope was larger as our characters tried to find a reprieve where they could live out their lives in safety.

In season two, hope is gone. The people aren’t looking for some way out. They’re just trying to find a place where they can live day after day. In season one, the issue was long-term survival; in season two, it’s about making it to tomorrow.

The way that can be done is through trust of others, but that is extremely difficult in a zombie apocalypse, where the acquiring of basic needs like food and health supplies are up to luck and people have been reduced to their most basic instincts, scavenging for food and resorting to violence to get what they want. Without spoiling anything, the antagonist introduced in episode two is a threatening figure simply because he seems to be willing to do anything to get what he wants, but what he wants isn’t that crazy. At one point, a member of the new group asks Clementine what the most important thing in the world is. She responds: Family. “It’s a tough world out there without people you can trust,” Luke says. It’s something that seems so simple, but it becomes the core of the story.

The choices you have to make as Clementine in this episode are based almost completely on trying to build up trust between members of your group and other people you encounter. While Lee’s goal was to build the best group for the survival—a group that seemed to represent the rest of the previous world’s traditional humanity—Clementine just wants to make it for more personal reasons. There are a few scenes where she has to use her prowess as the most competent little girl in the American South to take out zombies, but most of the time the pressure is on her to form bonds and to get people to treat each other decently (if that’s the kind of playthrough you’re going for, of course).

This is a world where the wrong degree of reliance can get you killed or captured and saying the right things can mean the end for certain characters. The stakes are higher for Clementine, Luke, Nick, and other new partners but the overall impact on the world is so small that you begin to wonder if the zombies are even important to think about at this stage. The toughest decision to make in this episode is all about what table you sit at for dinner.

A House Divided is more of a standalone Walking Dead episode than the first one was, drawing inspirations from the first game without being too reliant and mimicking, while also looking ahead to what’s really in store for Clementine. It harkens back to what made the first game so special: the way seemingly small things have huge reverberations. While the first episode served as a loose prelude, the second episode serves as the real introduction. It’s full, fleshed-out, and ultimately everything you would want in a Walking Dead episode.