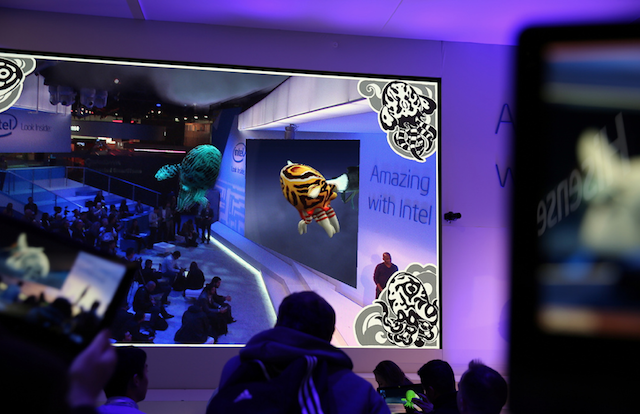 If experimental forms of narrative intrigue you, then you will love Leviathan, the new storytelling initiative shown off by Intel at CES this week. As with all cross-media projects, Leviathan can be hard to describe, but here’s what you need to know: a giant, magnificent whale sails off the screen and into the theater over an audience who was universally wowed. Just watch the video.

This amazing example of fantasy being brought to life is the work of the folks at USC World Building Media Lab, who, in collaboration with Intel, are transforming the Leviathan series of books for young adults into, well, something we don’t have a name for yet. It’s “a new space for storytelling. Not film, television, literature, theater, animation, or even interactive media,” the director Alex McDowell said.

So what exactly does that mean? Pretty much that you can hold up any laptop or mobile device equipped with a camera and see marine life hovering over your head. It’s basically augmented reality on a grander scale, incorporated into a film shown before a live audience, with interactive elements and everything. This is very cool, and we can imagine all kinds of possibilities with games.