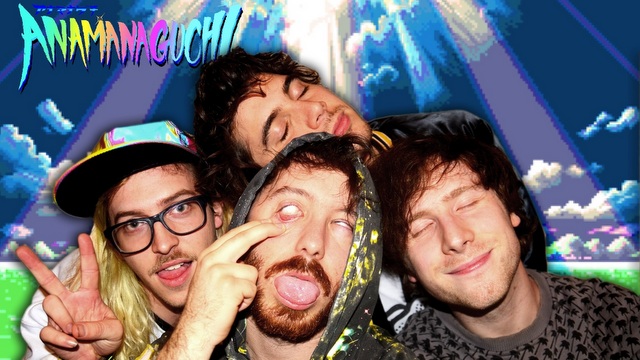 On “Planet,” the fourth track on Anamanaguchi’s new album, we find the usual cast of characters: robotic boom-bap, a tidal wave of synthesizers, some tinny guitars turned into percussion. But there’s something else, something mysterious. Buried somewhere in the mix is a cow–well, the moo of a 64-bit cow.

The cow was not supposed to be there. Songwriter Peter Berkman had a specific tone he was dying to sample from Majora’s Mask: that lovely, lonely warble when the girl at Romani Ranch teaches Link Epona’s song. It’s a quietly touching moment in the game. The girl is a friendly figure in an alien world, and the song is a familiar sound in an alienating game. Only once does she sing it perfectly a capella–at the end of a training mission–so Berkman hooked his N64 up to ProTools, booted up a save and, as the band watched on, started firing off arrows into ghost-shaped balloons.

Might as well include a chip’s impression of an animal.

But he screwed it up. Not the mission; he beat that after a couple tries. The save itself wasn’t right. He had already beaten the mission in a different three-day cycle, and so when she sang it wasn’t acapella. A cow mooed somewhere–plaintively, obstinately–in the background.

The band sampled it anyway. Berkman calls it his ”virtual field recording,” which perfectly encapsulates the inclusive and almost musicological spirit behind Endless Fantasy. The record is stuffed to bursting with ideas: about what chiptunes are, what they can be, and how they fit into music. Might as well include a chip’s impression of an animal.

Like a lot of contemporary music, the album pulls from disparate genres, but its 22 tracks don’t so much synthesize them into something new as unify them beneath a new banner. This pioneer spirit is rare in the chiptune community. For every Unicorn Kid or Ikonika, who fit the sound into a dense artistic vision, there are a dozen artists for whom the reference point is the only point.

Anamanaguchi’s goal, on the other hand, is different: assimilation.

The result is “22 different tangents,” as he describes it, each of which places the band’s giddy chiptune aesthetic into a new context: disco, R&B, prog rock, pop-punk, ambient, and so on. Impressively, none of this comes across as cheek or pastiche. When on “Prom Night” the band channels Europop, they do it straight-faced and produce a dancefloor-worthy anthem. When on “Space Wax America” they go for guitar-rock grandeur they conjure windmilling guitarists and arenas full of laser light–with no quotation marks to be found.

It’s a major evolution for the band, whose mastery of a certain sort of shred-heavy chiptune found its apotheosis as the soundtrack of the Scott Pilgrim vs. The World videogame. There, the band’s punk roots were on full display, both in intensity and in an almost dogmatic adherence to the chip. Now, Berkman says, “We don’t want the 8-bit stuff to be the entire soundscape. We just want it to be part of it, really. Putting it in different contexts is really fun for us.“

“It’s about dream worlds, and it’s about kinda growing up in an infinite universe.”

None of which is to say that videogames aren’t still in Anamanaguchi’s DNA. Indeed, they’re at the foundation of Endless Fantasy. Its title is, yes, a nod to a certain Squaresoft series—at press time, Berkman was getting ready to fight Final Fantasy’s Sephiroth—but it’s also a nod to the culture that games have created.

“It’s about dream worlds, and it’s about kinda growing up in an infinite universe,” he says of the album’s title. “People are able to construct their own worlds and narratives by the things that they choose to engage with.” He sees these fantasies as a good and a bad thing: they can consume us, or they can augment our engagements with the real world.

The 22 fantasies that make up Endless Fantasy, then, tussle with this issue musically. By placing the 8-bit sounds in a greater musical context they mimic the way our time spent in virtual worlds can bleed into our time spent in the real one.

A punk band that turned themselves into pixels and are now slowly re-materializing into the real world.

That bond is never more direct than when human voices emerge from the mix, thanks to a series of guest vocalists. These collaborations mark a first for the band, but Berkman was intoxicated by the process. He now plans to re-release many of the instrumental tracks on Endless Fantasy as vocal remixes.

“I figured out how to blend guitars and other electronics into this kind of 8-bit, 16-bit sound palette,” he says, “and now I’m really excited to put a human voice in there and see how I can make that sound like part of the same thing.”

An omnivorous Kickstarter campaign plows forward with all of these goals: videos, vocals, light shows, web design, and more. It’s a cross-media campaign for a cross-cultural band. The synthesis is most intriguing because it’s still unfinished: a punk band that turned themselves into pixels and are now slowly re-materializing into the real world, still faintly pixelated. On Endless Fantasy, you can hear bits of both worlds bumping into each other…and occasionally emitting a faint moo.