I want to watch The Banner Saga as much as I want to play it. The snowy whites and blues of its mountain landscapes remind me of Disney’s Mulan while its soft-colored Viking characters conjure images of Pocahontas and all the colors of the wind.

That Disney vibe is exactly what the developers at Stoic Studios were going for—even if my interpretation is a little too modern. Think back to 1959 and the era of “the American master Eyvind Earle,” as he’s credited in the Kickstarter for the turn-based strategy role-playing game The Banner Saga, and you’re more aligned with their vision. 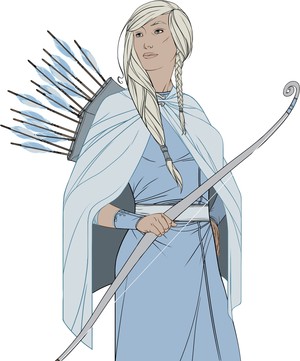 “The characters that we’ve done in the game are a lot more realistic-looking than Disney did,” said Arnie Jorgensen, the game’s artist. “But if you look at the old Sleeping Beauty, oftentimes the exteriors were done by Eyvind Earle and the interiors were done by other house artists that were really, really good, but they had totally different styles to them. So that’s something we’ve kind of struggled with and tried to keep in our game as well.”

Fans have suggested other influences—Don Bluth, or a Russian artist the team had never even heard of—but The Banner Saga’s is purely taken from Earle’s reign and his time contributing as art director on Sleeping Beauty and other classic films.

“We’re trying to make them look like old frame-by-frame animated characters, but they are not taken from a Disney style at all,” Jorgensen clarified. “That’s just kind of my style.”

Stoic’s team borrowed other tricks from Disney. The creators of Sleeping Beauty used a technique called rotoscoping, where everything is acted out in real life and then the video footage traced over frame by frame.

Jorgensen, creative director Alex Thomas, and technical director John Watson took turns filming each other performing different moves, trying to bring the characters to life for the game. Thomas played all the giants, Jorgensen the humans, and Watson the dredge—colossal stone-like creatures that are creeping over the land.

“We shot all this stuff in my front yard,” said Jorgensen. “One person would be on a ladder holding the camera as steady as they could, and the other person’s got a cape on, and somebody else is pushing them to make the animations look correct, and my neighbors obviously thought we were crazy.”

Even some of the tiered Kickstarter backers played roles, added Thomas—including a 70-year-old who they didn’t let do any fighting. They rotoscoped him in as the governor of Strand.

“I don’t think they had any idea about how rigorous it would end up being,” said Thomas. “We found out pretty early on that just pretending to get hit looks like you’re pretending. So we ended up starting to really punch each other and push each other over to make the get-hit and the die animations look great.

“It’s worked out so well that some people keep asking us, ‘How did you do your cel-shading?’ They think it’s 3D models that are motion-captured. No, they’re hand-drawn … hand by hand, every frame is drawn.”

But like a Disney film, which can conceal a current of violence under the same kind of playfulness, The Banner Saga tells a mature story that’s offset by visual beauty and bright colors. It’s like a song from The Smiths, said Jorgensen, where it’s depressing but so upbeat that you can mistake it for being happy.

“I think when you have stuff complement each other like that, it just makes a more compelling and interesting story all around,” said Thomas.

If it were presented differently—if The Banner Saga looked as bleak and grim as the story is—it would still be the same game, but the way people perceived it would be different, he said.

Stoic has taken full advantage of how The Banner Saga is staged, with up-close shots of the characters and a grand scope of landscapes and cities that’s so Disney-esque. It let them be more creative and versatile with the techniques they could use.

“By doing everything in 2D, we can make the world as big as we want,” said Jorgensen. “… If we did a 3D game, it would be really hard for us to get those vistas.”

Perhaps most of all, Stoic is reviving that sense of grassroots creative freedom that Disney once enjoyed that is now a touchstone of the indie games movement, with industry veterans like Stoic forming small teams and working from scratch with the support of fans.

“Disney to me was always strongest when it had such a clear vision in their early work,” said Thomas. “They had not hundreds and hundreds of people working on a movie but a handful, and one guy would be in charge, and he knew exactly what it was supposed to look like.”

“It had inherent beauty instead of just being a commercial product,” he said of the team’s aims with The Banner Saga. And plain and simple, it’s just the game they wanted to make.