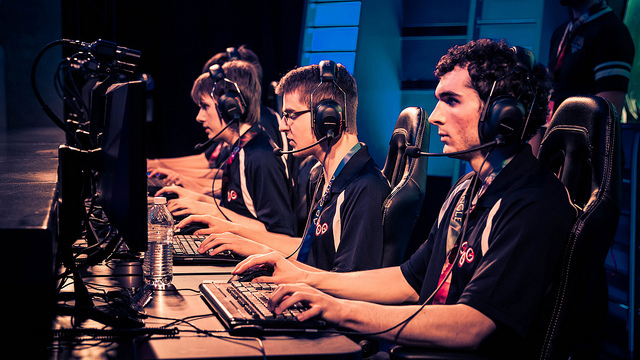 Thirty-two million deep, the active players of League of Legends are a dedicated, impassioned, and cutthroat mass. Altogether, they average something like a billion cumulative hours of play a month, and Riot Games keeps track of everything. “Because it’s all happening inside a computer, [they] can attach a telemetry sensor to every player, every joint, every part of the field, and gather all that data,” says David Smith, a data scientist at Revolution Analytics. This results in an ungodly amount of raw data—heaps of statistics on everything from glittering bounty to spiked gauntlets to hell-born fauns—collected on a vast number of smaller computers for the sake of number-crunching.

“Feeling is more important than statistics”

One might expect that all this data-churning out of Riot’s headquarters was trickling through to the players in some manner: that math whizzes on championship-caliber teams used divined their winning formulae through it. That, however, is not to the case. “Feeling is more important than statistics,” Sami Harbi, the manager of Team FNATIC says, noting a common belief that with pro players, it all comes down to instinct. Nevertheless, the internet is inundated with charts and graphs: win-loss rates; kills, deaths, and assists; gold-farming frequency; and so on. What’s the use of all these stats? How much faith should we put in them?

Over the past 150 years, we’ve seen the emergence of evolutionary biology, quantum physics, artificial intelligence, neuroscience, and now big data, and throughout that span, we’ve been questioning how much faith these deserve. At least with games and big data, the answer is: It varies. “If you go to a local chess club and pick a low-level player, it’s easy to spot flaws in their game,” explains Bill Grosso, CEO of Scientific Revenue. “Then, you go to the world championship of chess. It becomes really, really hard.”

This seems to be the trouble with numbers,  they aren’t much help at the highest level.

When it comes to the art of play, it’s traditionally thought that skill and intuition trump analytic study, but that notion was challenged in the ‘90s with the emergence of sabermetrics. This mathematical approach to the baseball diamond is best illustrated by the Moneyball school of thought, which became popular when the Oakland Athletics general manager took a strictly analytical approach to building his team. It worked surprisingly well. The 2002 and 2003 A’s both had remarkable seasons. Then, both years, when they got to the playoffs, they lost to wild cards in the first round. This seems to be the trouble with numbers. They work great for awhile, but they aren’t much help at the highest level.

The same thing goes for League of Legends. “Almost all players will reach a point where they will plateau without self-reflection, analysis, and focused practice,” Sabine Hemmi of the League of Legends stat site Elobuff tells me. “Any player who understands the basics can learn from statistics. It will be easier for them to identify their weaknesses and focus on improving.” Her words reminded me of the plight of a friend who had turned to studying tables because she had been playing for eight months (eight months!) and was still having trouble grasping the game.

Over-thinking it can be a detriment.

This is seldom the case in the pros. The numbers simply don’t do that much for you when you’re playing at the top of your game. The thing I heard again and again from members of high-level League of Legends teams is that, while they use statistical analysis for specific circumstances, they prefer to base their strategy on gut feeling and pattern recognition.

“Even if you have a statistic for everything, it all comes down to how you as a player and your opponent reacts,” says Harbi. In his mind, over-thinking it can be a detriment. His sentiments are echoed by Stress, game commentator and the manager of Team Dignitas, who says that “each game is highly-dependent on the champions picked, as well as the players themselves, which allows for a lot of variables.” In their salaried view, Moneyball doesn’t pay in esports.

That isn’t a devastating critique of big data. It’s just anecdotal proof that numbers will only get you so far. After all, big data is a law of averages, so it makes sense that, as Grosso says, “large scale data analysis can help new players a lot more than the elite.” That’s why game studios have began to use this groundswell of information to build better tutorials and find ways to naturally raise players to the next level. “Figuring out how to coach a player is absolutely a role for big data—spotting what successful players do, and then coaching the newbies,” he says. The hope is that it will elevate the status quo, endowing us all with a little more skill and grace. After that, you’re on your own.