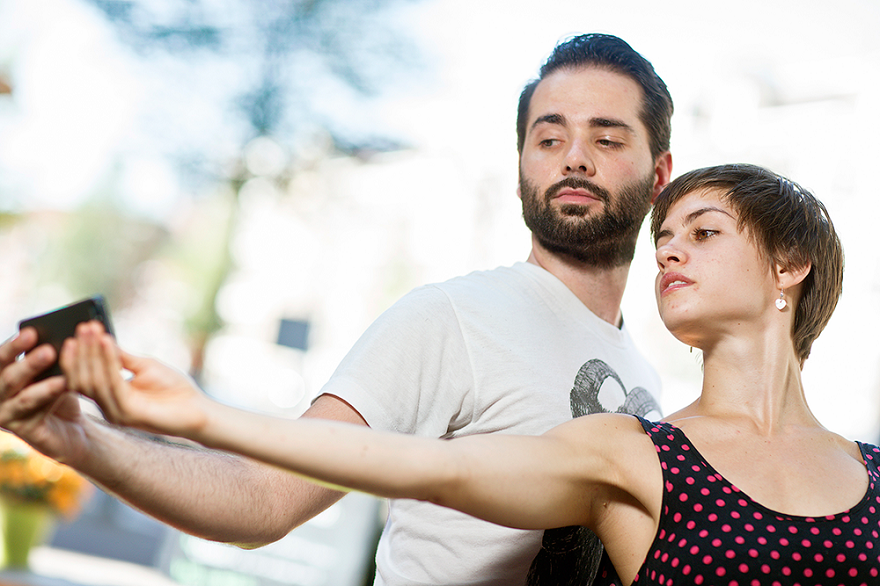 Adriaan de Jongh is making a dance game where people—wait for it—dance together. This seems obvious, but it’s uncharted waters as far as dance games go. Sure, Just Dance can teach you the bunny hop, and Dance Dance Revolution has been around since the heyday of shopping mall arcades, but the problem has always been that your dance partner was a computer screen. This robs dancing of the main reason ninety-nine percent of us ever do it in the first place: to get close and personal with another human being. It’s like eating your Brussels sprouts and getting no dessert.

With Bounden, an upcoming mobile game that slyly teaches players ballet and modern dance, de Jongh is righting that wrong. “Maybe we should call it ‘Dancing Sim,’” his cheery PR person Eline tells me. But they’re sticking with Bounden, a name that suggests the tangled arms and legs of lovers tangoing, but also hints at how our lifestyles have become inseparably tangled with smartphone technology. As de Jongh says, “everyone has a phone with them these days.” And because they’re always turned on and in our pocket, “there are apparently ways of tracking things that no one has thought of yet,” he says. Well, you can scratch busting a move with your significant other off the list.

As the game designer at Game Oven, de Jongh specializes in making games for touchscreen devices that coax two people into playfully, and often suggestively, touching. Many of his games, such as Fingle, are great pickup props. That one starts off innocently, but quickly escalates into the Twister of hand-holding, with all the implied inappropriateness. He was playing one of his flirty games with a friend when he realized: why stop with the hands? “We found ourselves moving the phone really slowly and doing this weird slow dance,” he tells me over webcam. He then spins in a loop to illustrate, his shaggy dog bangs falling over his eyes.

He was playing one of his flirty games with a friend when he realized: why stop with the hands?

Taking advantage of gyroscope and accelerometer functionality, Bounden simply has two players grab hold of the same phone and rotate it in the air to align some icons on-screen. “It’s like the players are satellites that are rotating around the Earth,” he says, which strikes me as the most poetic description of dancing ever. The result of their orbit is that they’re automatically dancing. While videos of de Jongh playing with the prototype are less than graceful, that could be just him. “Actually having to think of the flow with your body is really difficult,” he confesses. But, rest assured, the final version is being choreographed by Ernst Meisner of the Dutch National Ballet.

The obvious benefit this has over dance lessons is that it’s fun and inexpensive and you can whip it out on date night, according to de Jongh. But the big picture reason that games may one day be used as simulators for all kinds of physical activities is that they’re systematic and demand accuracy. “If you’re play Mario, pressing A will always jump, so you can do it perfectly,” he says. And by overlaying invisible structures onto physical space, they could likewise give you feedback on the perfect pirouette. Right now, playing Bounden on a mobile device is an intermediary step, a stopgap until accurate motion-tracking sensors are cheap and durable enough that they come embedded in ballet flats and jazz pants. And until someone like de Jongh comes along and designs a game for them.