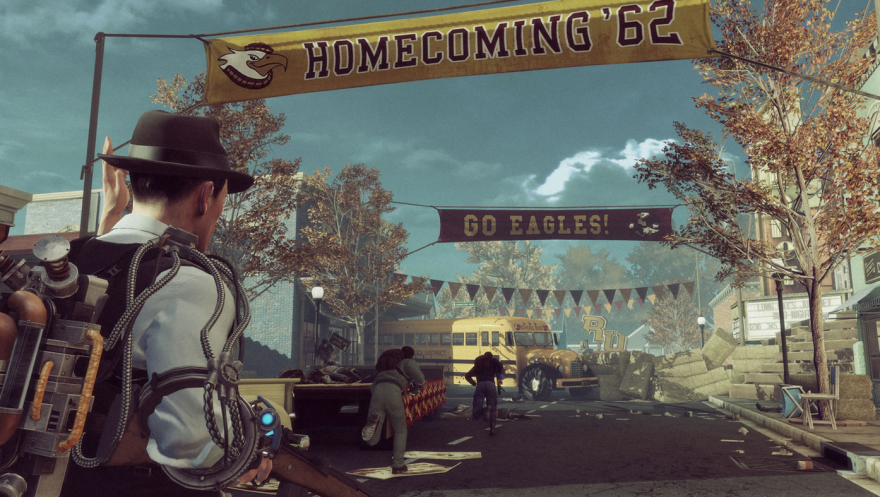 The cinematography of the modern film director Gaspar Noé is exquisite. In Enter the Void, his 2009 drama about sex, drugs, and crime in Tokyo, the scene is defined by constant movement. The camera swings and dangles, sways like the ocean, floats up over the city, detouring into the bathroom window of a woman taking a pregnancy test, and continuing down the lamplight into bright flickering D.M.T. hallucinations.

In terms of subject matter and general feel, The Bureau: XCOM Declassified is nothing like that film. Yet as a hybrid strategy game and third-person shooter, its camerawork makes similarly dazzling pirouettes. The camera swoops across the set, snaps to the perspective of your wingman, shadows the ethereal blue outline of his body as it takes cover behind an overturned Mazda, and zooms in with the crosshairs on an E.T. snarling in slow-mo. Then, it’s back to run-and-gun without ever missing a beat.

Such assured camerawork can be stunning, but it takes years of dedication to pull off. Noé had to haul out whirling digital handhelds, convoluted rigs, and cameras mounted to cranes. Though videogame cameras are virtual, they present their own unique set of complications. Namely, they should provide the player with the best view at all times. This is easy enough in a standard shooter; the game industry has years of experience under its belt at perfecting things like zooming in for a headshot through a scope. But when the point-of-view starts doing the salsa, you can toss all that expertise out the window.

And, to be sure, a lot was thrown out in The Bureau. Its fascinating camera system is the end result of many small disasters. Drudging on for six years, the development cycle for the game was long and brutal. Lead creators walked off the project. Plans were changed. Once upon a time, XCOM was survival horror. Then, a first-person shooter. Later, it was more of a strategy game. Now, it’s none of the above. This is classic development hell, but one good thing came of it: its camera can do anything.

It turns out that there are all kinds of unintended consequences when shifting a game’s camera arrangement in the middle of development.

That flexibility was born of necessity. When I talked with Patrick Guarino, XCOM’s user interface lead, he explained how the game evolved from a first-person shooter to one in the third. “In first-person, you didn’t have the best view of the battlefield. It felt tight. Very frequently, you didn’t know where your agents were,” he says, referring to the two underlings you bark orders at during gunfights. As you can imagine, this was no good for strategic thinking. So, they pulled the camera out from the lead character’s head, tethered behind him like a kite.

This fixed the feeling of claustrophobia, but messed up other things. It turns out that there are all kinds of unintended consequences when shifting a game’s camera arrangement in the middle of development. For instance, the camera would drop straight through the floor. Equally problematic, now the player was staring at the back of a character the whole time. Because videogames are grand mirages, what you don’t see doesn’t actually exist. The team had to draw it, texture it, and animate it. That goes for the tops of buildings, too.

Then, we get into the tribulations of having three agents with three different perspectives. The transition between them got disorienting. “For a while, we had a control scheme where you’d hit the left or right d-pad to switch to the agent on your left or your right,” Guarino says. But, “if you hit the left d-pad, and no one was on your left, the camera shifted right. There was a real disconnect. They wound up scrapping that idea, instead letting the camera go freely wherever it need be.

Another big question emerged: what happens to the camera’s focal point once it changes from the viewpoint of one character to another? Does it keep on looking in the same direction, or does it swing to the vantage of a teammate? There was a lot of back and forth. Ultimately, they tried to frame the newly selected character in the old perspective, which was a bit of a headache.

In the end, it was worth it.

In the end, it was worth it. As we talked, I wondered if The Bureau’s camera system was something like that of a football stadium’s, which involves numerous cameras along the sidelines, cameras in the stands, and things like skycams, all feeding into a broadcasting booth. Guarino said no, that they only have one camera.

“You can’t move a camera from one end of a stadium to another,” he says. “Just the general physical limitations of our world prohibit that. We don’t run into those limitations. If we want to suddenly shift the camera a hundred feet in one direction, we can. No problem.” As with Enter the Void, “the camera moves through physical objects, through walls,” he says, but without the hassle. I imagine Gaspar Noé would kill for that.