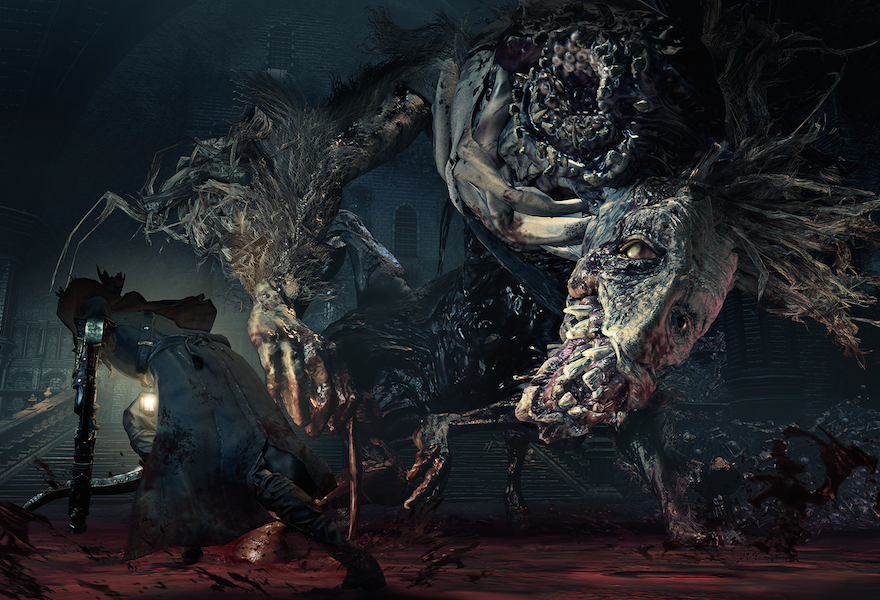 The River of Blood, the Beast Cutter, the Surgery Altar, the Astral Clocktower, the Blood of Adeline, the Nightmare Church, the Underground Corpse Pile, the Holy Moonlight Sword, the Beasthunter Saif: the settings and armaments that furnish The Old Hunters will certainly sound familiar to veterans of Bloodborne. So too will its macabre menagerie: the Bloodlickers and the Parasites, the Winter Lanterns and the Nightmare Executioners. One can well imagine a brainstorming session at From Software, the developers trying to think gloomily as they thumb a dog-eared thesaurus. The Despairing Cutlass? The Infirmary of Sorrow? You half-expect to wander into the A Bit Crestfallen Caverns or pick up a rapier called Glum. They’d better leave Bloodborne alone after this expansion. They’re running out of synonyms for bad.

A sense of duplication looms over The Old Hunters. About midway through one confronts a troop of miniature bosses simply called the Living Failures, which could be the name of a good punk-rock band. These fellows are rangy and grayish and sort of drably nondescript, and in their number and manner seem conspicuously similar to the Celestial Mob fought previously in the Upper Cathedral Ward; they faff about in a garden rather than a shallow pool but attack alike and are contended with in much the same way. Though the resemblance may be deliberate. The Old Hunters takes place in a realm known as (what else?) the Hunter’s Nightmare. And the Hunter’s Nightmare, one gathers, is a kind of mirror image of Yharnam, the city in which Bloodborne proper takes place. Thus are its sundry ghouls and dreamscapes in fact reflections of the other side. The Living Failures are meant to be forgiven their plagiaristic aspect because it’s part of the game’s curious design.

In this way The Old Hunters feels less like an expansion than a reiteration. It begins in a negligibly remodeled Odeon Chapel, now ground zero of the Nightmare; from there one proceeds as usual through the Cathedral Ward, made over with verdant overgrowth and trees that slope and wend through the hills. This cloned environment has been populated with a handful of new enemies, true, whose styles and skillsets, especially early on, afford one a good deal of novel encounters. But even these feel mainly routine. Combat is still very much a matter of evading and parrying, swooping in and strafing away. And while nearly a dozen new weapons are introduced to your repertoire over the course of the game, only one, the Whirligig Saw, offers anything like a significant change. Bloodborne never particularly encouraged variety in arms—the blood stones needed to upgrade a weapon made it virtually impossible to enjoy the full use of more than one or two. The inclusion of so many here strikes me as nothing more than a concession to value.

Hidetaka Miyazaki’s most enduring idea was that videogames could stand to be rather more difficult. Bloodborne spiritedly advanced the cause: many of its ghastly enemies were occasion, for this player, for much hurling of the controller and gnashing of the teeth—though not at all unpleasantly. Miyazaki’s games are so capably, even elegantly designed that their demands on the player never quite seem unfair or unreasonable, no matter how outrageous; one naturally feels, as with a challenging novel, that their difficulty is conquerable. (The personal reward for all this rigor has been exhaustively chronicled elsewhere.) That The Old Hunters is grueling should hardly seem surprising. But the degree can’t be overstated. The Old Hunters is ludicrously, painfully, torturously difficult—so difficult that its (say) ten hours were stretched out for me to an exorbitant twenty-five, much of it spent repeating arduous grinding circuits. The press release included with my review copy recommends a character level of 65. Mine was a little over 90 when I trotted in—and I felt so far from prepared even then that I presume the press release’s author is either preternaturally talented or out of his mind.

The first boss encountered in The Old Hunters is a heinous equine monstrosity called Ludwig the Accursed, though accursed in what way is anybody’s guess. Ludwig trots and whinnies grotesquely about a big cathedral room, whomping any moving target with ungainly hooves—a pretty ordinary Bloodborne foe, in other words. What you need to know about this Ludwig chap is that there’s a flailing corpse stationed right outside his chamber—one that yields five health-replenishing Blood Vials every time he’s chopped down. Ludwig is so bloody hard that the game is reduced to charity: accept this merciful gift, the game seems to say, since the boss certainly isn’t programmed to pity. For the first time in the nearly hundred hours I’d invested in Bloodborne I really did feel defeated. Suddenly its difficulty no longer seemed conquerable.

I bested Ludwig in the end, with the aid of a seasoned colleague willing, much to my relief, to lend a hand online. And with the cooperation of others I suffered through the following three boss battles too. (As a salve to those without online play, the designers have retrofitted the game with lamps at which A.I. hunters can be commissioned as partners, though in my brief experience they were so ineptly programmed that they could scarcely last five minutes in any kind of serious fight. One even got stuck against a wall straight away and stood unmoving as the enemy bore down on her.) It’s safe to say that I’ve had enough of Bloodborne—enough of Yharnam and the Hunter’s Nightmare, enough of blood echoes and quicksilver bullets, enough of grinding and more than enough of dying. Indeed I think I’d had enough before The Old Hunters started. The integrity of this game’s vision made it a seductively cohesive and concentrated thing, pure and unrefined. But perhaps that purity was already whole. More isn’t bad just for its faults and repetitions. It’s worse than that: Bloodborne was pure—and The Old Hunters dilutes it.