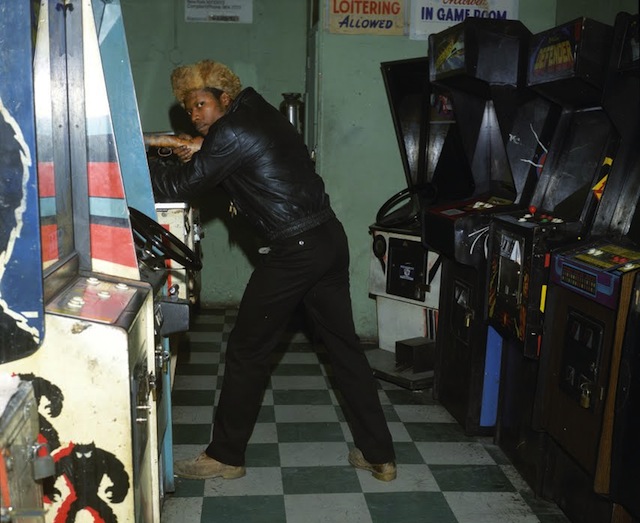 With the revolution in home entertainment brought on by console developers and the rise of restrictive standards for digital rights management to combat piracy, videogames, like mass entertainment more generally, seem to be moving towards increasingly isolated and atomistic experiences. But before any of this, there was the arcade, a space that evolved alongside the dark underbelly of New York City that was all but erased as Manhattan was reinvented in the 1990’s. We talk with the photographer and filmmaker Hilton Ruiz about his new book project The Forty-Deuce, an upcoming collection of photographs taken by Bill Butterworth he discovered that record this lost history of Times Square.

So you grew up around the time that you’re now covering in The Forty Deuce?

Yeah, I grew up in the Lower East Side. Times Square is not too far; my father was the guy that always brought me around there. It was a kind of a hangout. Back then, we didn’t have parents saying “It’s awful these parents would take their kids to such a place.” They don’t really exist anymore, but if they did parents would get in so much trouble.

Was Times Square the only area in the city that had this arcade culture and public space where people could go and play these games at the time?

During the time that was the area was known for. I remember reading that at one time in the eighties, fifty percent of all quarters in NYC were coming into banks through Times Square. But at that time you could see them at bars, in restaurants, in stores, in subways they used to have them down in the basement. They’d each have one or two arcade games because you’d already have change from buying tokens to put into the machines. Even out of New York City like in Queens and Brooklyn, you would always see those two or three generic arcades. But you would want to go to the arcade in Times Square because it was this sort of sin city.

Where were these photographs featuring arcade games taken exactly?

That is an arcade where you could go in the booth and put your change in-quarters or sometimes they had their own coins-and you could watch a video. The booths looked like bathroom stalls. The writing in the pictures show: animal pornography, European pornography, orgies, pornography that deals with bisexuals, lesbians. You’d go in there, put your coins in and watch a good two to three minutes. It was more of a pornographic store. They also had the games, but you could go in the back if you want to see live sex shows. Times Square was really crazy back then.

How did your parents feel about you going to a place like this? And how did children and teenagers navigate this kind of space if they’re just going to play games but suddenly find themselves in a world full of pornography and sex work?

It’s funny because in a lot of the photographs, these guys are teenagers. Once you got there, anything could go. And it was common at that time; it was normal, it was something you could do-you went to the movies and you would know, right next door, they were showing a pornographic film. My mother, of course, was not very happy about me doing it. My father was like, “Ah, that’s no big deal.”

“They also had the games, but you could go in the back if you want to see live sex shows.”

So how old were you at this point?

Believe it or not I was about 8 years old.

Being in New York City, being that age was like being a teenager. There were so many kids running around the place. And being a young kid, what was my favorite thing to do? Play at the arcade.

What games do you remember playing or enjoying?

The games that shook me the most have to be Dragon’s Lair and Space Ace. And of course Spy Hunter was probably one of the classics of all time, and Ms. Pac-Man. So those were the games that I would go play. I wasn’t too crazy with the older ones they used to have- Centipede, what is it, Galaga I think it was.

So how much money would you spend in a day?

Which games were the most popular – the ones you needed to stake out a position in front of?

There was a certain time when Dragon’s Lair first came out that you had to wait. You know how we used to put the quarters on the side? Space Ace was always off and on. What was one that you’d have to wait a lot…Operation Wolf. These games were so popular because that was the first place they appeared. I remember when they first came in it was like “Oh my god what the hell is this?!” I wasn’t really crazy about Space Invaders and Galaga, but they’d always have people around them. And of course there was always somebody on Ms. Pac-Man, there was always somebody on Spy Hunter. Star Wars was pretty popular at that time because it was coming out.

By the late eighties, the arcade games were slicker, faster – just a long row of boxes. My mother used to call them boxes. One time, my mother took a garbage pail and she said, “Throw a quarter inside the garbage pail.” I threw it, and she said, “That’s what you’re doing.” [laughs] I was like, “Mom, but you don’t understand!” I used to have these arguments with her, she’d say, “What did you do with the money, you didn’t get any food?” Later on I would lie and say, “No, I bought pizza.” Then she’d be ok. But it wasn’t true, I went right to that machine and Brr-r-r-r — all the change came out, and I’m playing.

You went there with a group of friends?

Yes, I grew up in a big family home, with six kids altogether. It was like The Brady Bunch, three girls and three boys. All six of us used to go. It was a family thing to do-because back then, what was there really to do as kids? There wasn’t Toys ‘R’ Us in every city. Now you can buy toys from CVS, Walmart, Walgreens, but then there weren’t too many toys to play with. And of course, ColecoVision was coming in, but if you remember their games were almost 80 dollars.

And the whole pull of Times Square was this place would draw in so many different classes and cultures because everything was so cheap.

Did you ever try to sneak in to the seedier sections of Times Square?

Sometimes, yes. A lot of times I was also buying music. My cousin and my brothers-they were older so they would buy records. That was the thing-you get your music, you get your records, and then you play your arcade games also. And you get a peep-if you want to go to the movies, you go to the movies.

Did you ever not feel safe being there?

There were times it didn’t feel safe. Growing up in New York City, you knew when something was going on. You knew when there was some sort of pervert or something was up. Eventually, we would try to go to safer place. And sometimes if it was really hectic, we would leave the area.

Were you mostly around other children?

Yeah, because I was the youngest of the crew. We used to go in groups. The fear factor wasn’t really there because you had a lot of friends.

When did the area start to change? Did you notice a slow trickling away or did it happen overnight?

Of the arcades? I think it was just the dying out of technology and that console games started coming out – SEGA Genesis, Nintendo. I really saw it dying out was when they started making sports games.

That would make sense.

You know? Like when Madden and NBA Jam started coming out. Arcades started being very generic. Everything was a fighting game, but it was always the same thing. It was either Marvel vs. Capcom, Double Dragon, Mortal Combat 2,3,4. It started to get boring. And I think they couldn’t create anything anymore since it was cheaper now to buy console games. How long are you gonna rob somebody of fifty cents to play for fifteen seconds?

You know, like the shooting games, The House of the Dead, Time Crisis, Terminator. They’re such a ripoff! A dollar fifty, two dollars, get out of here! I’m not spending that much money on that!

All images from The Forty-Deuce: The Times Square Photographs of Bill Butterworth, 1983-1984 edited by Hilton Ariel Ruiz and Beatriz Ruiz, published by powerHouse Books.