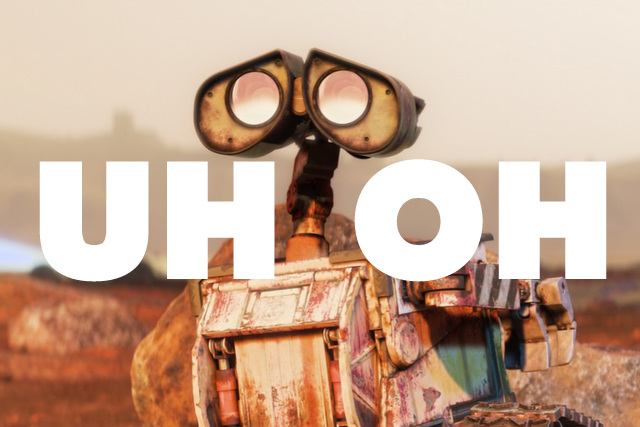 In the opening scene of Wall-E, the easiest thing to do is to believe the mounds of items covering the Earth is garbage. The camera flies past desolate nuclear plants, crumbling skyscrapers, abandoned cities, and settles on great piles of… stuff. What else could they be if, if not junk?

As the camera zooms in to observe the robot’s day-to-day life, though, we see a more complicated picture: Wall-E actually treasures many of the things he’s gone out to compact into trash. Rubber ducks, a Rubik’s cube, video cassettes, these minor wonders of human invention aren’t just cherished by the lovable character; they play a significant role in his charming of EVE.

It can be hard to square that affection with what seems to be the movie’s early premise, that unchecked capitalism has run amok, destroyed the environment, and plastered it with civilization’s leftovers, but there it is. Despite the planet’s uninhabitable state, the film holds a significant amount of admiration for human ingenuity and creativity.

The dissonance isn’t new, though. Videogames have been exploring the same dynamic for some time now, and just as poignantly.

Daniel Bell chronicled the friction within free enterprise back in 1996, but as Americans we’re only now truly beginning to grapple with the consequences. The Great Recession thrust the effects of an unfettered free market to the forefront of American civil discourse, and, despite the constant clashes between President Obama and Congress, the result has been the general, if controversial, approval of a more efficient welfare state.

“The moment we undid ourselves and our very environment.”

Stirred by a recent New York Times piece on the breakdown of South Korea’s family unit, Andrew Sullivan wrote a thoughtful reflection on capitalism’s ability to destroy the underlying structure of the society it modernizes, disappearing entire industries overnight and “tearing through old ways of life like acid through iron.” He wondered if future generations will look back on ours and consider it “the moment we undid ourselves and our very environment, reaching untold material wealth as well as building societies in which loneliness, dislocation, displacement and radical insecurity cannot but increase.”

This is a sentiment that was experienced across Japan, too, as the results of the country’s massive post-war industrial boom gradually came into focus. In Aum Shinrikyo and the Japanese Youth, Daniel Metraux recounted the feelings that left some Japanese open to alternative, extremist views such as those espoused by the religious group responsible for the 1995 sarin gas attack on Tokyo’s subways.  Wealth was multiplying, but so were environmental issues and personal dissatisfaction. For many, it was simple: People were “too focused on money and materialistic vanities to realize they are heading towards total collapse.”

There’s probably no better encapsulation of this feeling than Katamari Damacy, a title that takes immense pleasure in the feeling of acquisition and unflinchingly criticizes its end result. Keita Takahashi originally wanted to make a game about love, but it’s rather fitting that he ended up with this instead.

A lonely individual who, despite a remarkable ball of stuff, is simply floating through a vast and endless sea.

The game starts out innocently enough, with players rolling around a ball that latches onto anything it touches. Though initially limited to collecting erasers, dice, and other tiny knick-knacks, the katamari eventually becomes large enough to roll up tables, humans, and buildings. Not even mountain ranges or rainbows can escape the enormous sphere’s super-glue grip. Set to a backdrop of bright Japanese pop, Katamari Damacy cheerfully depicts a kind of snowballing addiction to acquisition that literally uproots the earth itself.

The title is often billed as an attack on capitalism, but it’s more nuanced than that. For one thing, it’s undeniably fun. The whole experience is wrapped up in such a charmingly vibrant package – press start at any time to measure the size of your katamari and witness the joy of discovering that it’s roughly the equivalent of 120 bowling pins or thirty sailboats – its appreciation for the objects of industry can’t go unnoticed. Videogames are, after all, the products of a consumer-based industrial society; rather than simply pan the entire foundation, Takahashi indulges it to its most logical extreme.

By the end of the game, the world Sullivan and Metraux describe is fully realized: a lonely individual who, despite a remarkable ball of stuff, is simply floating through a vast and endless sea.

One look at the number of Pikmin lives lost during a day’s play, however, is enough to make us pause.

Anyone who’s seen an episode of Hoarders has sort of seen Takahashi’s dystopia in action. Unable to harness their urge to compulsively stockpile anything and everything, the individuals depicted often find themselves lost in the midst of their material mounds, separated from friends and family. For a videogame released in 2004, Katamari Damacy can be unnervingly prescient.

The Pikmin series is another example. The second installment in particular lovingly categorizes dozens of items people take for granted in their everyday lives as players lead the obedient, flower-like Pikmin around a garden to collect items. It’s hard to find a more delightful description of a gift-wrapped box than Pikmin 2’s “joy receptacle,” or of a juicer as “the merciless extractor.” There’s an encyclopedia of stuff the series falls in love with, but the entire experience is built around the fact that we risk the Pikmin’s very existence to obtain items we barely give a second thought to in life.

As players we micromanage our followers, plan their deployment, and take pride in our ability to wrest a coffee mug from an antagonistic insect. One look at the number of Pikmin lives lost during a day’s play, however, is enough to make us pause. It’s great that I gained a new appreciation for AA batteries, but it’s kind of horrifying to think I sacrificed 12 living things in battle to do so. Every time a Pikmin utters its last heartbreaking sound as its soul floats away from its dead body, it’s enough to make someone feel awful.

Even the idealistic Okami, which tasks players with the mission of saving the environment rather than plundering it, can’t help but shower them with material goods when they perform environmentally sound acts. Restore a pond or revive a withered tree with Amaterasu’s divine sumi-e paintbrush, and you’ll be rewarded with not only a beautiful world, but also gold, beads, and heaps of other items.

For a game intent on showcasing the power of nature, its concession to industry and personal acquisition inverts the typical dynamic between environmental stability and the human need to gather things. Even the prospect of saving a polluted world requires the existence of material prizes. It all sounds rather cynical, yet a significant part of the modern green movement’s success hinges on convincing people of its inevitable economic benefits (green energy creates jobs, invests in America, etc.). I have my share of problems with Okami, but its struggle is also a global one.

As a whole, videogames are still experimenting with various methods of interacting with pressing public issues – Game the News is a good example of artists tinkering with the form’s social relevance – but the medium has been engaging with humanity’s impact on the world in sophisticated ways. Some of the success is due to the fact that videogames are especially great vehicles for exploring cause and effect scenarios, but as these projects show that’s not the only reason.

These titles are powerful not necessarily because they are critical, but because they also indulge in and enjoy human ability just as much as we do. They get so wrapped up in what they’re gathering it becomes easy to overlook the danger occurring in front of them. Let’s just hope we don’t do the same.