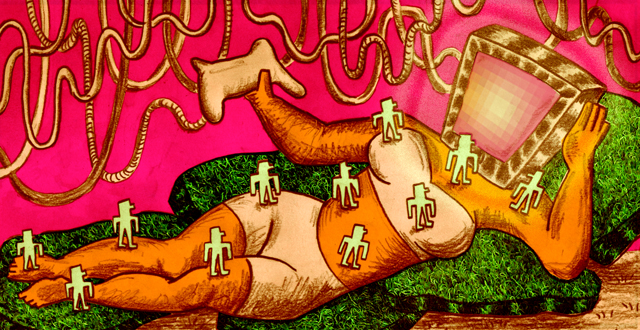 It’s half-past eight on a Friday morning. I have been awake since five. I am so tired that I want to cry. I’m eating a burger for breakfast and reading excerpts from a Tucker Max book on my phone. Nothing makes sense.

As I get up, I make eye contact with a man sitting a couple tables away. He sizes me up and asks, “What are you playing?”

I give him a blank stare.

“MLG” stands for Major League Gaming, and it’s exactly what you’d think it is. Three days of nonstop gaming, from StarCraft II to League of Legends to Halo to Call of Duty. It’s not just for players, either. Countless game heads will be traveling to Raleigh, N.C. just to watch other people play videogames. And for some reason, this shaman of a gamer already knows I’m going.

I join him. He’s wearing a backwards snapback hat, a gray T-shirt, and athletic shorts. He looks perhaps 17 percent like a gamer. Mostly, he looks like a young L.L. Cool J. He’s sitting across from a slightly taller fellow, perhaps 22, wearing a black T-shirt that says vVv. That’s one of the largest gaming teams—sorry, clans—in the nation.

“So. What are you playing?”

The vVv dude perks up. “Me too. What race are you playing as?”

I have a professional obligation to be Michael Jackson.

I don’t want to tip my hand, especially when all I’ve got on my side is the element of surprise. See, I’m piss-poor at StarCraft II, and I’m covering the tournament from the perspective of a contestant. The best advice my editor can give me is, “Ask other players how to best grief them and then use those tactics in-game. Kind of like how Paul McCartney told Michael Jackson at lunch once that music publishing was a good investment strategy. Then Michael Jackson bought the whole Beatles catalog.” In this metaphor, I have a professional obligation to be Michael Jackson.

“Zerg. I’m actually playing because I’m writing a story on MLG. Any advice?” I switch on my recorder.

L.L. Cool J (who plays Call of Duty: Black Ops and gives interviews very much in the don’t-divulge-too-much, communicate-in-platitudes-and-vagaries vein of an actual pro athlete—at times it feels like I’d get more genuine insight from, say, Royal Ivey) and vVv guy (who is unafraid to talk shit about his fellow competitors and espouses an altogether more party-centric mindset, though he will end up going to bed at approximately 10:15 p.m. tonight) both advise that I initiate a strategy known as “six-pooling.” This is the StarCraft version of blitzing with everything you’ve got. It involves spawning a few soldiers and bum-rushing your opponent’s base in the hopes that you catch them off-guard. It’s an artless, almost insulting strategy—in essence, six-pooling is like starting a game of chess with Bobby Fischer and then reaching across the board and punching him in the face.

My new friends give me approximately a 1-percent chance of making it out of the first round of play.

I show up to MLG Raleigh wearing a disguise: cargo shorts, ankle-high socks, and a T-shirt that says, “Home is where the bong is.” Perfect, right?

I cowboy up to the “Contestants” table and attempt to sign up for the StarCraft II tournament. The young woman at the table wants to know my handle. “killscreenintern2,” I say, tossing out a moniker that, after several rounds of emails and a rejection of the handle “Alphabro,” my editor and I both agreed was hilarious. The woman looks annoyed.

“You brought a keyboard and mouse, right?” she says.

I blink. I don’t even own a standalone keyboard, let alone one specifically dedicated to gaming. “Can’t I just borrow that stuff?”

“No. You can buy a spectator pass over there.”

My competitive StarCraft dreams, officially smashed into the harsh concrete of reality.

I take to wandering the floor of the Raleigh Convention Center in search of free stuff. From a bird’s-eye view, it looks like the Vans Warped Tour put inside a concert hall. There are three main stages in the front, with booths encasing the perimeter on three sides. The place is an advertiser’s wet dream. Brands from Hot Pockets to the National Guard to Sony have booths dotting the landscape, each itching for 10 minutes alone with their target market. For some reason, most of the companies have laid down Astroturf in their booths.

The Dr. Pepper booth is massive. Dr. Pepper, the official beverage sponsor of MLG, is the only beverage allowed on the MLG floor. The booth is manned by the “Dr. Pepper Girls”—extremely nerdy versions of the girls who work at Hooters. “I have the gun from Halo tattooed on my hip,” one Dr. Pepper Girl casually mentions. Although I worry that she will regret the existence of this tattoo when she turns 22, my companion points out that if she were a real gamer, she would have specified which type of gun it was. Poseur.

I overhear two gamers chatting, both nursing those 13-going-on-shaving-for-the-first-time mustaches that you find among early high-schoolers. One says to the other, “I’m fuckin’ pissed I got a girlfriend, ’cause I totally could have gotten with one of them Dr. Pepper girls.”

They’re having a push-up contest at the National Guard booth, and the winner gets a T-shirt. So far, the leader has done 155 push-ups, an almost daunting amount of push-ups. I can bust out 30 on a good day, so I don’t even bother. Instead, I take a crack at their “augmented reality booth,” where I’m given a chance to see what I look like in a National Guard uniform. I’m pretty sure it’s just a green screen and some on-the-fly Photoshop magic, but I’ll admit: I do look pretty badass with that helicopter in the background. My tax dollars paid for this.

I start talking to the recruiter; this is his first pro-gaming event. His son plays games, he says, and whenever he tries to play him in, say, Halo, he always runs into a wall and can’t figure out how to shoot his gun.

Eventually I find an MLG event that will have me as a contestant. Turns out Sony is sponsoring a semi-official Mortal Kombat tournament on PlayStation 3, and needs more players.

Because I’m an unknown entity as a gamer, I draw a shit seed and end up matched against a professional Mortal Kombat player in round one. Just like my friend from the airport, he’s in the vVv gaming clan. One look at the vVv shirt and I know I’m toast, like taking a stroll through the Third Ward and seeing a red bandana. I come from an illustrious, platform-agnostic career of abject Mortal Kombat failure. This will not end well.

I select Scorpion. He goes with Jax. We engage in some small talk. He seems nice enough, I think, bracing myself for actual pain.

In our first match, I manage to make Scorpion graze Jax perhaps once, before being completely destroyed. I ask for three free hits in our second match, hoping that I can mount an astounding, Rocky IV-like comeback where I stage both a personal victory and also end communism. He acquiesces, taking pity on me. (Or perhaps so that he can brag to his friends about my pathetic ass later. Either option seems fairly honorable, honestly.)

My three lumps come and go, yet somehow land with roughly the force of a chip shot bouncing off the door of a Chrysler. Scorpion, evidently, is not a strong dude. My opponent presses a flurry of buttons, and before you know it Jax picks me up, turns me upside-down, and slams my head into his knee. My back breaks, and you can see the agony on Scorpion’s face. I make a face to match. My opponent’s done this so many times before that barely anything registers on his mug. Boredom, maybe.

And with that, my foray into the field of professional gaming comes to a close. It’s a Fatality, but it feels more like a mercy killing.