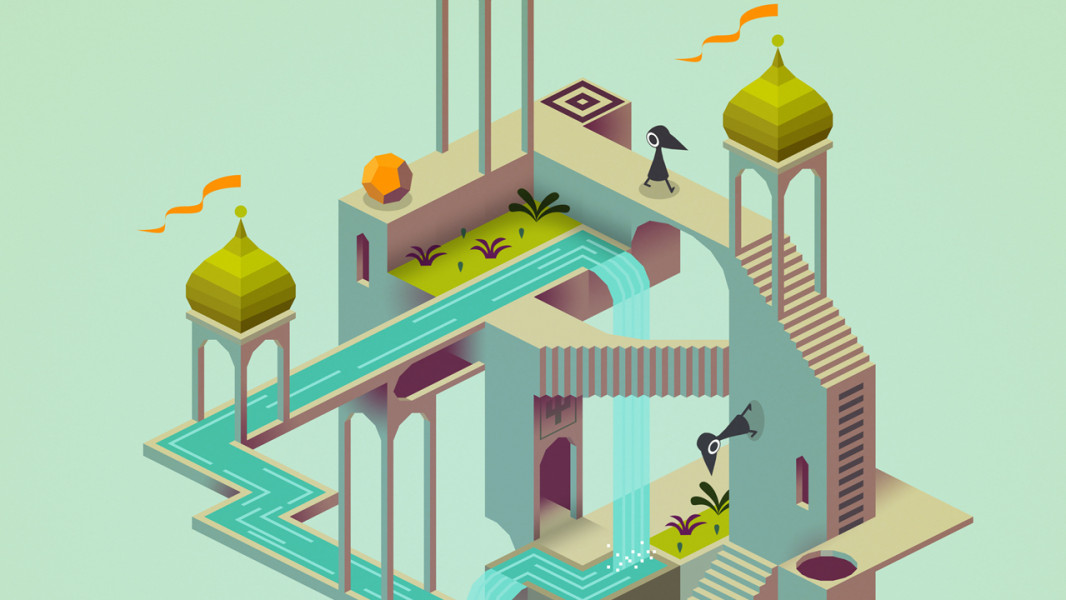 Ken Wong, who modeled puzzle game Monument Valley after the works of Dutch artist M.C. Escher, doesn’t think we need more “art” games. There are plenty of niches to fill.

“I believe what we as an industry and culture need is better discussion, better ways to talk about games,” the designer and artist said.

The “games as art” debate isn’t it.

For developer Ustwo, one mode of communication comes through Monument Valley’s symmetry and towering design, each screen a collection of “little worlds”—microcosms surrounded by empty space, Wong called them. Escher used similar techniques to convey the images in his often bizarre lithographs and woodcuts.

“Life would be simpler if it was made up of simple geometric blocks and straight lines,” said Wong. “That’s why people feel so comfortable with Lego and Minecraft and why pixel art is enjoying a new appreciation.”

Escher’s influence is visible in countless other titles of recent years, like Fez and Echochrome, but it’s also left its print on older classics like Sonic the Hedgehog, Lemmings, and Diablo II. Hidden in these ordinary games are strange dimensions: stairs ascending and descending at odd angles (“Relativity”), transforming backgrounds (“Sky and Water”), and overlapping patterns—illusions that confuse the player’s perspective. Not first-person or third-person like we’re used to, but something altogether different and curious.

“I also think game players like figuring out the rules of a universe, but they love finding ways to break those rules,” said Wong. Escher’s paintings did just this: setting up rules very clearly, and then breaking them.

In Monument Valley (due early April for iPad and other mobile devices), players break rules by doing the impossible: navigating their way through sets of impossible spaces and shapes in the maze-like paintings that Ustwo has created. Wong said he sees Monument Valley more as an interactive experience than a traditional game.

“Monument Valley‘s design is intended to be very open-ended,” he said. “We present a world and a journey to the player, and it’s up to them to challenge themselves if they want to.”

The surreal design isn’t based on Escher alone. “What games are is too broad to have one idea of what is important,” Wong said. He took inspiration from poster designs and low-poly 3D art, environments and objects “with distinct silhouettes” like Japanese flower arrangements, and architectural styles from North Africa, India, and the Islamic world.

Still, Escher is at the heart of how these disparate styles come together.

“Escher found a way to convey mathematical and geometric ideas to a wide audience through skillful illustration,” said Wong. “He took familiar elements like buildings and birds and landscapes but arranged them in surprising and challenging ways. Having this as a touchstone was a good way to keep Monument Valley grounded and relatable.”

“All computer graphics are illusions.”

Those ideas seem to be why Escher’s vision has guided so many developers over the years. There’s something natural about the way it intersects with game design.

“All computer graphics are illusions,” said Wong. “We discovered that a lot of the tricks we used to make Monument Valley were built into graphics systems all along. Escher’s work embraces art for what it is—representation. The way he shows that representation is false is the same way we deconstruct game spaces and game logic.”

Wong doesn’t have a favorite Escher piece. His interest is more in understanding how the artist viewed the world, which is rarely captured in a single image, he said. By delving into the unfamiliar, we can change our perception of what something can be and how we can engage with it.

That’s what Wong wants Monument Valley to do for game experiences.

“Examining Escher’s works as a whole reveals a curious, imaginative, analytical mind and a precise, articulate hand. It would be truly magnificent if Monument Valley could reach people in a similar way.”