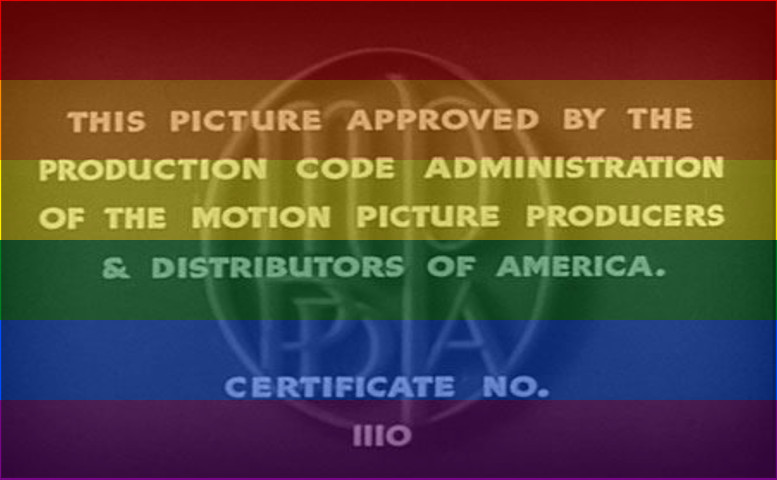 In the 1920 and 30s, cinema was slowly reaching its maturity as an artform. The introduction of sound added a chaotic new element just as existing elements like editing, shot selection, and the Hollywood production system were refined. The medium was gloriously, almost frighteningly, alive.

And so, in 1934, the Motion Picture Production Code, known as The Hays Code was introduced. Named after the censor and Republican National Committee chairperson Will Hays, the Code was intended to stop film’s ability to display girl-on-girl kissing, fervent voyeurism of the young female body, and successful gangland crime, among other things. The Supreme Court-approved censorship laws prohibited the distribution of films with such content or forced them into costly re-edits.

Until the waning and ultimate demise of the production code with the advent of the MPAA rating system, some twenty years later, artists were forced to carefully maneuver around outright expression of a character’s homosexuality. Hitchcock’s Rope, to take one example, is very literally about homosexuality. This was clarified explicitly, many years later, by the film’s writer, Arthur Laurents, who was also gay, in the documentary short Rope Unleashed. But this fact is never stated in the film itself. The nature of the intense relationship between the main characters was communicated subliminally through selective omission, because it had to be.

While there is no modern Hays Code equivalent in contemporary American video games (the ESRB rates but does not censor) the manner that LGBT characters are being introduced to a broader audience in major games is through this same blowback-wary method of diligent self-policing. The writers allow space for an audience member to overlook or deny the homosexuality of a particular character if that’s the way they would prefer to see things.

Game writers like Rhianna Pratchett, who has stated that part of her would have loved Lara Croft to be gay, are instead artfully presenting these characters in a manner that is more aesthetically palatable to players (and likely their concerned parents) who might find explicit same-sex love too lurid or off-putting a subject to handle with frankness in a video game.

So narrative ellipses mute the “objectionable” in the way that the gay character Joel Cairo from the novel The Maltese Falcon was made ambiguously gay in the pre-code 1931 film version, and then, in the familiar 1941 version, simply wore fancy white gloves and smelled of lavender. (The term “gunsel” was still retained from the novel in reference to Cairo, because censors assumed it meant hired gun, and the word later adopted that meaning, but it was really slang for homosexual.)

These characters are gay but that is not spoken to directly. It’s Hemingway’s iceberg theory of writing, except enforced upon writers by anxious suits with money at stake.

A watchful playthrough of Tomb Raider while interpreting Lara as having romantic feelings for the story’s damsel in distress, Sam, works perfectly, with nothing in the game universe that contradicts it. (Though whether or not Lara’s feelings are reciprocated is more open to interpretation.)

The character of Aveline de Grandpre, protagonist of Assassin’s Creed: Liberation, and with cameos in Assassin’s Creed IV: Black Flag, is another example of an LGBT character whose orientation is there for the keen-eyed and open-minded to interpret.

Aveline is the only playable assassin to eschew the gender-neutral robe and hood of the Assassins, instead donning a man’s tricorne hat, shirt and trousers. Indeed, in the PlayStation-exclusive Aveline mission in Black Flag the soldiers chasing her repeatedly say such things as, “He’s getting away!” “After that man!” etc.

The developers could not have been unaware of this incorrect use of pronoun—likely an artifact of the game’s main campaign being centered on a man—but they did not bother to correct it. It actually makes more sense like this. The soldiers would indeed think the figure they were seeing was a young man or boy, because Aveline is appareled as a man, literally from head to foot.

It is made clear that the person who is reliving this female ancestor’s memories is, in fact, a man

If one finds the hidden audio log “Subject 1 Interview” in Black Flag, it is made clear that the person who is reliving this female ancestor’s memories is, in fact, a man. The entire tenor of the interview Subject 1 has with the researcher in the audio log is thus about being transgendered.

Subject 1 describes at length his experiences reliving the memories of a woman, Aveline.  When the researcher asks about a possible sexual liaison with a male acquaintance of Aveline’s, Subject 1 replies: “I never experienced her…consummating anything. That would be… I think maybe she was confused.”

“Well, first of all, I don’t know for sure, okay?” And soon goes on, “Does it mean she’s more like a guy if she thinks about… is that why she’s able to assassinate?”

Patience: “What is it you want, if not my charm?”

Aveline: “Only you. Charmless.”

Patience (stepping closer): “Is it a game of flats you fancy then?”

[Note: “a game of flats” is 18th century slang for lesbian sex.]

“A friend sent me. Connor. He will offer you safety and training.”

Patience: “Mademoiselle, if you get my charm back, you can take me as your game pullet.”

To clarify, a “game pullet” is slang for a young prostitute.

In the dialogues above, as elsewhere, ideas of gender fluidity and homosexuality constantly surround the character Aveline. Yet she neither confirms nor denies a specific orientation.

It’s worth mentioning that Jill Murray, one of the writers of Assassin’s Creed: Liberation, in which Aveline is the main protagonist, published a novel immediately preceding writing that game: Rhythm and Blues, which is about a young girl coming out as lesbian.

From a certain point of view, there is something elegant in handling LGBT characters in this indirect way. There is certainly relief in escaping the expositional mire game writers often confuse for storytelling. And because the focus of the story is forced to be about something else, these LGBT characters are not defined only by their orientation.

Look at how film handled something that was impossible to present to the audience in a similarly subliminal way: non-white protagonists.

For many years, if a film did focus on a black character, the story would generally be about that character’s experience being black, like The Jackie Robinson Story or Guess Who’s Coming to Dinner and many blacksploitation films. It took time for producers, and perhaps audiences, to realize there could be stories involving non-white characters that didn’t have to revolve around their ethnicity.

So, for now, introducing LGBT characters with undisclosed backgrounds may be inadvertently helping foster more nuanced writing in games. To quote Rhianna Pratchett in reference to why LGBT characters are only being made protagonists in a subtle way, for now, only visible to the astute, without addressing the issues more deeply: “Getting those representations into games is the first step. Once we’re more comfortable with that, actually speaking to those issues a little more broadly will be possible.”