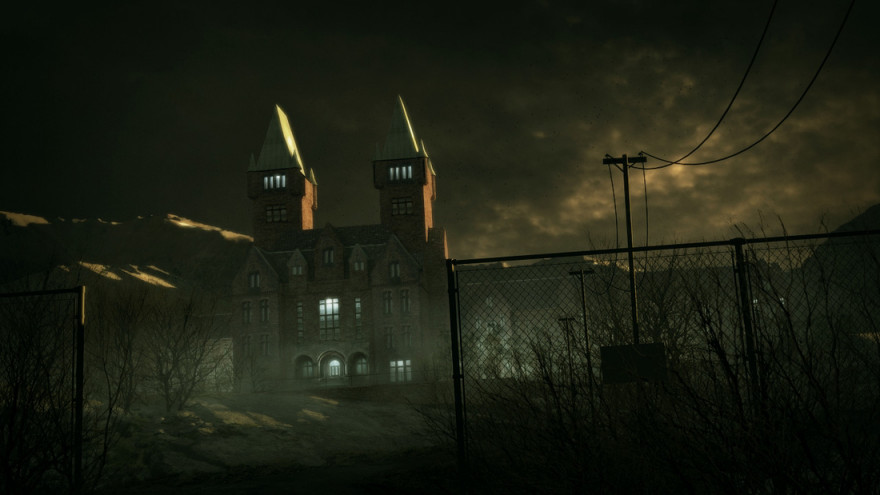 In Outlast, a new survival horror game coming to PC this month and PlayStation 4 later, you play a journalist investigating an asylum recently re-opened under much secrecy. Armed with your night-vision camera and nothing else, your only goals are to uncover the truth and survive. When I call Philippe Morin, co-founder of Montreal-based Red Barrels Studio, I ask if this game is a chance to get back at harsh critics, sending them into this evil place with no way to defend themselves.

But Outlast revolves around a single pure desire: to make the player scared.

He laughs, explaining that no, it was a logical choice. “We didn’t want him to know how to fight. It’s not a character that’s often used in videogames, and it was a good fit for our premise. So no special vendetta here.” He pauses. “Not yet anyway.” He laughs again, this time a rich, high-frequency cackle, the laugh of a man who has felt terror but also wishes it upon others.

Morin co-founded Red Barrels, a ten-person studio, after working with both Ubisoft and then Naughty Dog. Much of the team comes from these larger groups used to building massive worlds on a grand scale. But Outlast revolves around a single pure desire: to make the player scared. The new digs give them a chance to flex more subtle muscles. One of the muscles not to be used? The trigger finger.

“All our careers we’ve been doing single-player action-adventure games,” Morin said. “It felt like a nice change to have a game without any combat.”

Games so often trade on a player’s sense of strength, a feeling most easily created through physical assault: an empowered sense of superiority. To punch, shoot, explode or otherwise incapacitate your opponent is to sit atop your pedestal and laugh heartily at all those groveling at your feet. But what if you’re the incapacitated? What if a nervous chuckle is your only defense against the impending doom waiting for you around every corner?

In a medium where “power-up” is a noun, not giving in to player expectations is a risk.

Few games have the courage to strip players of their powers and leave them stripped-down. Metroid and its ilk draws the player in by slowly uncovering more and more of your previously lost abilities; by the end you can defeat all comers. Outlast starts you with zero and gives you little else. In a medium where “power-up” is a noun, not giving in to player expectations is a risk.

Morin admits they played Frictional Games’ Amnesia: The Dark Descent, and loved the sense of dread created by the complete lack of direct force. There’s no safety net of a shotgun shell blasting to bits this dark creature lurking in wait. Silent Hill: Shattered Memories attempted a similar feeling, a survival game of all flight, no fight. Outlast shares a mechanic where, while running away, you can look behind you. As the camera swivels you catch a glimpse of what you only heard moments ago; the shifting perspective helps capture the confusion and terror of being pursued by something you can’t hope to stop. So you hide.

“What we’re making in various ways is a stealth game in a horror setting,” Morin says, explaining that team members have worked previously on Splinter Cell. “The biggest difference is if you get spotted, instead of going into a shootout, you go into a chase.”

But instead of invoking other games, Red Barrels is taking more cues from film.

“When you watch a movie, sometimes you may see a scene that feels like a cliche, or overused. But if you start to think about it in terms of interactivity, suddenly that same scene becomes interesting.” It’s an obvious point, but a good one. How many times do we watch another helpless victim run away from their would-be attacker? Innumerable. How many times have we, as players, been forced to turn and run? Startlingly few.

There’s an inherent powerlessness to being small and young

As adults we often assume a kind of default control; we’ve lived through the requisite rites of passage, so we pretend we know what we’re doing. As children, though, we don’t yet know our limits. There’s an inherent powerlessness to being small and young, and that same reservoir of feeling is too often stripped from grown-up entertainments. Living in Quebec, Morin grew up exposed to both American and European culture, and was surprised how much of the television from overseas, especially for children, was willing to be sad. One such show was Demetan the Frog, an imported anime from Tatsunoko Studios that’s basically Romeo and Juliet set in a pond. As such, themes delve into pretty melancholy territory, with Demetan an outcast (he’s but a lowly treefrog, you see) up against a constant stream of bullying jerks and disapproving parents.

“Compared to what my kids watch today, the TV shows when I was younger were more depressing,” Morin says. And maybe it’s this comfort with unease that allows a studio from Montreal to build a game that doesn’t hold your hand or make you feel powerful. Such agency was stripped from Morin long ago.

As a child he remembers his babysitter telling him the story of When A Stranger Calls, where a babysitter keeps getting threatening phone calls. When it’s revealed they were coming from inside the house, the caller leaps out from hiding and attempts to murder the kids. “And I don’t know why, but it stayed with me,” he says. “I remember from that moment on I would always feel there was someone watching me in the house.”

As a father he can better see the psychological effects certain scenes have on children. He recounted a time when his ten-year-old daughter was watching him play Portal. When he reached the final encounter with GlaDOS, she was unsettled and confused.

“I remember from that moment on I would always feel there was someone watching me in the house.”

“She was like, ‘Why is she trying to kill you? She was guiding you the whole way.’ She’s seen me play Call of Duty … but would never pay much attention. But that moment from Portal? That affected her more than any gore she might have seen.”

If Outlast succeeds, it will tap into that tiny pleasure center so ignored once we become adults, the part of our brain that knows we are in the wrong place with no good way of getting out. As kids we produce these scenarios ourselves, playing backyard games like Ghosts in the Graveyard or telling spooky stories under the covers. We knew then that little is assured; part of the fun is knowing we can’t escape. The only thing to do is wait, or run, or hide, the whole time uncertain of what will happen next.

Winning isn’t really the point. All you can do is not lose. Sad? Maybe. But much closer to how the real and scary world works.