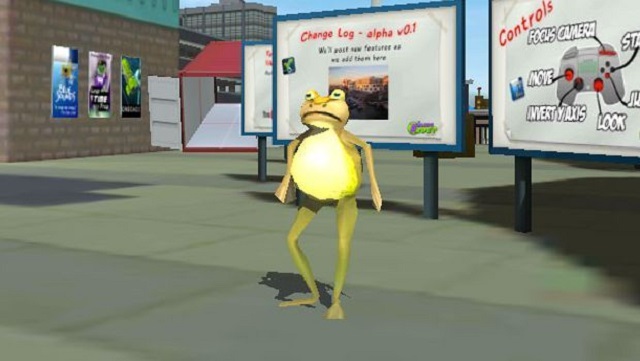 With its first year in the wild, the Ouya has seen more gags about it than criticism. The inexpensive but consumer un-friendly console has a lot of fun games, but an awful, terrible reputation, smogging the thing with a cloud of awkwardness. Not all of its detractions come from its detractors. Marketing something solely as the home of free games is misleading and pointless. Many of Ouya’s more ambitious titles do have a fee, and it’s not like you can’t effortlessly freeload off a smart phone or PlayStation Plus. The Ouya still has a shot at being something greater, but the potential will be lost unless its greatest qualities are looked at in, let’s say, a different mentality.

This came to me after I had an embarrassing episode earlier in the year. I was playing Metal Gear Rising: Revengeance, which is excellent, but I wasn’t. The last boss, a neverending Dragon Ball Z sausage-link duel against a Colorado senator, was dragging, and time, as I had not realized, was running out.

I had to put down the controller and tell my brother: “I’m done.”

I was, I should note at this juncture, high. This is not inherently a very big deal, either legally (anymore!) or personally. Somehow in all my drug history since high school, I had never really succumbed to paranoia. But during this final boss battle, full of steel clangs and one-upping, I had to put down the controller and tell my brother: “I’m done.”

I asked him to take control of the TV, put something mindless on, while I became distraught with the idea that I was permanently stuck in this flickering state. My brother, unaware of my mental distress,  turned to the History Channel, which was at the time saying that the pyramids were built by aliens, as it sometimes does. This launched me into a pacing frenzy, fuming that these conspiracy theorists were “self-hating species-ists” and that, “Of course we built those pyramids, humans had slaves, you asshole.” My brother was laughing but I was not. “THEY HAD SLAVES.”

Now, was this episode enough to make me stop smoking? No. But it did force me to re-assess what games worked best with the drug. Videogames while blitzed, as you may know, can be sublime. It can heighten the pre-existing sensory overload of games like Dyad, Luxuria Supurbia, Proteus or Journey. It can inspire competitive camaraderie as you and some friends thunder each other in Samurai Gunn or Smash Brothers. And it can cast everything in a gauzy, nostalgic hue: How many of your dorm room days were spent bag-eyed in front of Mario Kart 64 or Guitar Hero?

But the modern game, utilizing every button on the increasingly dense controller, isn’t the future of dank gaming we had hoped for. There’s a perverted interest in separating couch buddies, and while that’s got plenty of benefits, I don’t want to be solo, some high goblin in his own lowly den. That future of gaming I felt I lost with conventional consoles, I found in the Ouya.

It’s small, simple, funny and weird. It won’t likely exist on another system

One of my favourite games of the year, nevermind on this tiny cube, is No Brakes Valet, brought to you by Enviro-Bear 2010’s Captain Games. There’s not much web presence for it, probably because it’s not the most popular game on not the most popular system. However, its most extensive gameplay video on YouTube, nearly twenty minutes long comes from aiRCoft. “It’s so fun, we had to record it,” says the hosting player. Its description reads: “A friend and I both got pretty high then decided to play the game.”

No Brakes Valet is silly, in concept and in execution, but it is solid. You just park vehicles with limited control, swerving around like a muscle-bumper car and crashing into your own failings. Regular cars are broken up by chicken trucks, the prime minister’s limo (which has a big P on top) and a bus with a short-breathed honk that makes you laugh every time. It’s small, simple, funny and weird. It won’t likely exist on another system, and it’s not the only game on the Ouya I would describe that way.

You’ve maybe seen The Amazing Frog at some point, that game about jumping, falling and farting, but I doubt you’ve played it. You don’t know how awkward and damp the controls are. How, on an objective level, this game must be awful, and yet it isn’t. It is somehow completely endearing. The Ouya is full of “oh bless your goofy soul” moments, like a rain simulator or a low-res voyage on a boat you can’t control in the middle of a void ocean.

Those couldn’t cut it on PSN, won’t stand a chance on Greenlight. They are too micro, more accidental joys than indies with lofty ambition. You can find them locally, at game jams, and in odd, elusive corners of the Internet. Their rough experimental form will keep them shy from commercial outlets. The Ouya’s lack of curation could be a digital anarchy, but it could also be an open door. Better anarchy than antiquity.

Many games on the Ouya have pronounced themselves as outcomes of jams—No Brakes Valet and Towerfall two powerful examples—and many feel like they have similar origins. If Ouya wants to recreate the best lightning they’ve seen on their service, they should do more to encourage the castaways of the world to align to them, be it to test the waters with their concept or just to find a place to rest their tiny, beautiful heads. I would go so far as to suggest Ouya start throwing their own jams to conjure storms, instead of ill-conceived crowdsourcing promotions.

There are so many of these games out there, it would be a lazy paradise to have them in one place. And for reasons that they are weird, awkward, local multiplayer or just a slow-moving trainwreck, they are amazing high, when a rush of fantastic dopamine allows the skinniest concepts to feel hypnotically satisfying. It excuses the accidents, and accompanies the hallmarks. It’s a trip.

I’m not saying that the Ouya should launch a campaign about how many hits you should take before hitting the couch. I am saying if the Ouya team continues branding their option as “the free games” one, and nothing else, it will remain a narrow novelty, the playground of a few open-minded souls. Ouya has strange, elusive games and needs more, and I need to take my little vaporizer outside one more time today and play a few of them again.