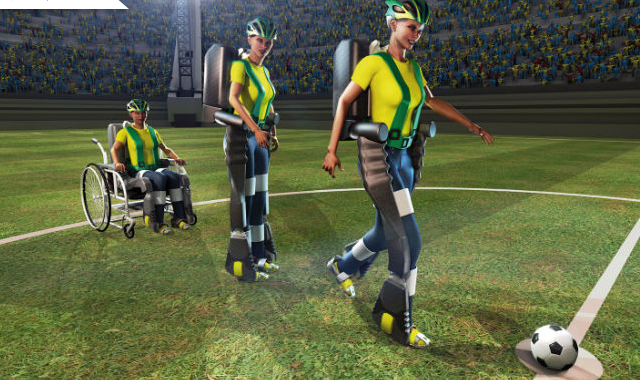 Here’s a feel-good story to kick off your week. A teenager will be kicking off the 2014 World Cup in São Paulo. The catch? He’s paralyzed, and will be assisted by an amazing robotic bodysuit built by neuroengineers at Duke. To put this in language that everybody understands, the device is controlled by the boy’s mind. Just picture Iron Man and you’ve pretty much got it. But technically speaking the technology uses a headset that reads neural signals to control the robot suit. The fancy tech was researched by implanting tiny electrical sensors in the brains of rats and monkeys, but now this youth will be trained to kick the ball and get the games underway.

While important research in brain-controlled prostheses is being done in the field of physical therapy, less-important but potentially really cool research is being done with brain-controlled games. While current electroencephalography (or EEG) headsets are rather rudimentary controllers, the potential is there. There’s no telling how biofeedback will benefit the way we live and play.