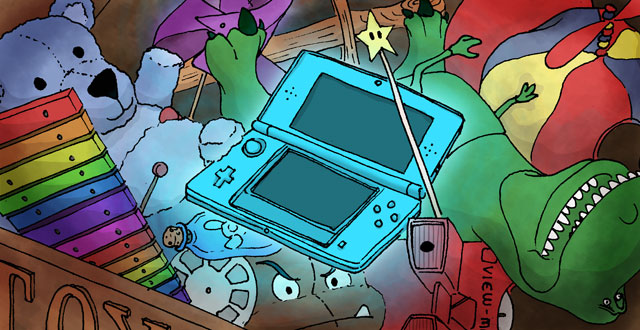 In 1889, Nintendo started making games. Its playing cards, or karuta, were widely used in gambling halls or backrooms for various pursuits of leisure, allowing the company to thrive through the first half of the next century. Eventually Hiroshi Yamauchi took over the company from his great-grandfather and looked to extend its reach. Initial adult products failed: Who wanted pre-portioned instant rice? He needed an audience capable of regenerating, with an ever-increasing appetite for distraction and entertainment.

Yamauchi assigned a maintenance man by the name of Gunpei Yokoi to come up with toy ideas for the Christmas season. Many were clever uses of simple technology, like the Ultra Hand: a double-helix of angled wood that extended outward with a simple squeeze of the handle, a mouth of clenching pincers on the other end. Its success brought about a line of “Ultra” toys, including an indoor pitching machine and a periscope to see around corners. These were devices no one needed, yet their intangible charms wooed the crowds. Nintendo was making games again.

Fifty-some years later, Nintendo is still in the toy-and-game business. Odds are, you’ve held or swung or waved or touched or played one of its games at least once, if not a thousand times. And if you’re among the most loyal (or stubborn), a feverish acolyte to the house of Mario, you’re holding its most recent creation in your hands right now, and the latest evolution of Yokoi’s Game Boy: the Nintendo 3DS, a dual-screen handheld system capable of depicting 3D visuals, no glasses required.

But kids are fickle. Adults, sometimes more so. As such, first impressions are important: a firm handshake; an overpowering perfume; a transfixing title. These entranceways into developing relationships can sway the course. The home screen of the 3DS is as important as any launch title, if not more, since you’ll be staring at it for the next five years. It’s a conduit, a gateway; you’ll never not pass through here on your way somewhere else. And so it’s important enough to warrant a closer look. I came away surprised, and smiling. In fact, the killer app of Nintendo’s latest toy has less in common with Avatar than it does a plucked dandelion.

Most home or title screens are just that: a layer between you and the rest of the experience. Nintendo products often remove this layer and allow the play to begin immediately. Think of Super Mario 64‘s stretchable polygonal face. The divisive Wii Music, unfairly compared to Rock Band et al., one-ups its rhythm-game counterparts in at least one area, allowing the player to jam along with the title tune before even selecting a mode. WarioWare: Twisted for the Game Boy Advance allows for typical Wario-like sabotage; using the included accelerometer, the player can shake the game and scramble the title itself, turning Twisted into “Twirped” or “Tweered.” Already you’ve taken ownership of the game; you’ve begun to play, and you haven’t even yet pressed Start.

Already you’ve taken ownership of the game; you’ve begun to play, and you haven’t even yet pressed Start.

And so you gaze at the 3DS’s dual screens, wondering what to do first. The bottom screen displays parallel rows of icons, one for each piece of built-in software. Some are intuitive—a camera, a musical note—while others are intriguingly obtuse (pug-nosed smiley face with a beanie cap?). When you tap an icon, a simple animation unfolds on the top 3D screen, rotating in space and waiting for the second tap to open the software and begin.

These moving placeholders—a swirl of photos represents the camera application, for instance—float within some cauterized, antiseptic arena. The place has volume. Though no bottom or sides are discernible, you can see white rounded squares slowly shift over a grey field. The ebbing movement creates a subtle drama necessary for providing the imagined depth. Your eyes flit back and forth from the rotating object in the foreground and the shifting tiles behind, an ecosystem of living symbols.

You’re staring at a logo for Mii Maker on your 3DS, a rotating wheel of cartoon faces spinning on its axis. It reminds you of those metal carousels found at old playgrounds, or a pinwheel blowing in the breeze. You think, “If only I could reach out and touch this,” because by god, with the 3D depth slider pushed up even slightly, it looks like you can. You think back to a day at the State Fair long ago, holding a flimsy pinwheel glazed in vivid polyurethane, your nine-year-old self blowing into the blades and making the colors spin into beautiful abstraction. Absent-mindedly you blow into the screen of your new handheld. And the rotating logo spins faster.

You blink your eyes. You blow again, and the wheel, its rotation slowed due to a lessening momentum, picks up speed. This virtual carousel has been pushed by your physical breath until it moves. This is physics. This is equal and opposite reaction. You blow again, really exhaling now, forcing air through pursed lips, and the wheel takes off, spinning like mad, even bouncing off its horizontal axis due to the sheer force of your effort.

Thrilled, you tap other icons, wanting to see what else you can do. Each logo rotates slowly, peacefully, until you blow into that shifting void and make it spin like a wrought-iron cock in a storm.

This is fun! you think. And you haven’t even done anything yet. Still, you’re somehow enthralled. You blow into the screen, again, and then once more. When you set the system up on your desk to observe and take notes, you intermittently send a few breaths its way, impressed anew each time. You play spontaneous games with makeshift rules: Keep the logo spinning as long as you can on one breath. (Nine seconds.) Spin it using successive breaths without reaching the maximum speed. (Six times.) See how far away you can be and still send your little carousel twirling. (About three feet.) Post-it notes flap on your desk. Errant pens roll away onto the carpet. You pay them no mind, blowing into this dimensional playground while tender chimes lull you with their vaguely futuristic burbling.

You forget you’re enacting a flurry of spent binary synapses. You forget the programming needed to sync on-screen animation with the embedded mic, located below the bottom screen, right in front of your mouth, making any white noise result in an accelerated spin. You’re no longer holding that $250 portable console with Wi-Fi access and 800 x 240 resolution and 128 MB of FCRAM. You’re simply a kid holding a new toy, wooed by its charms. Amazed at the power of your own breath.