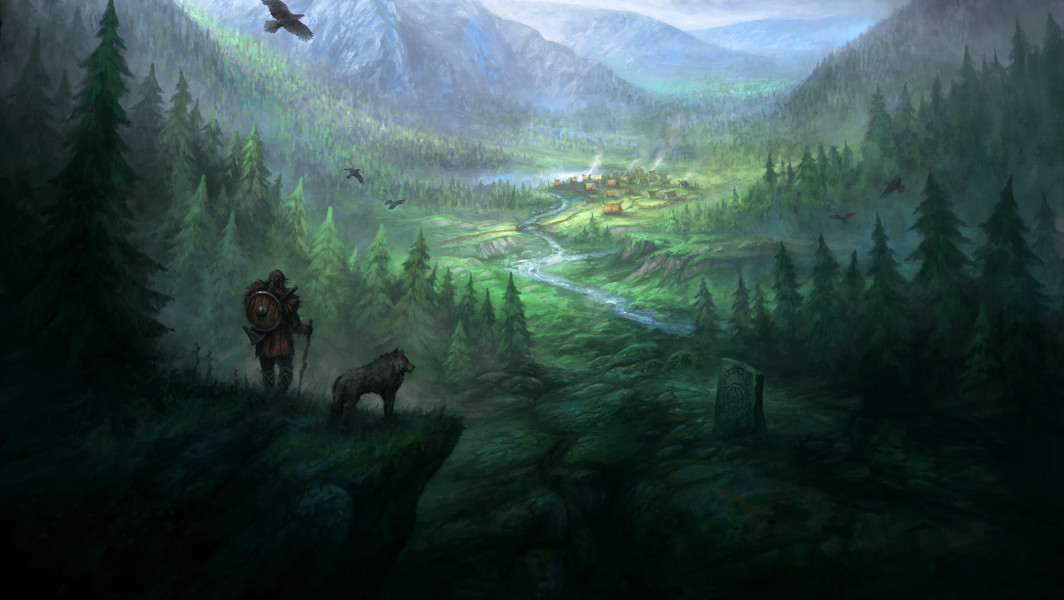 Paradox Development Studio (distinct from Paradox Interactive, the publishing branch of the same company) has been making only one kind of game for 14 years at this point—but since no one else even tries to make the kind of games they do, no one really minds. They call them “grand strategy games”—they put the player in charge of some country or leader in a grand simulation of world history, they are strategic, but playing them feels less like being in control of a battlefield and more like being swept along in a grand, historic narrative.

This January, Paradox announced that they were three years in development of a fantasy RPG—Runemaster—so as Kill Screen’s resident Swede, I traveled to snowy Stockholm to talk to studio manager and Runemaster designer Johan Andersson.

“When you make an RPG,” Andersson says, “you have two options. You can invent a world and write history and lore, or you can use an existing world, pay a licensing fee and throw away your creative freedom.”

By setting their new game within Norse mythology, which Andersson and his team knows well, he can get the best of both worlds—the creative freedom he needs and the giant ready-made mythology he wants. “Also,” he says, “nobody has really used Norse mythology in a game before.”

Which is not to say that Viking iconography is unheard of in video games—nor is it especially rare in popular culture in general—but the implementation can, for someone in the know, be shaky at best. Skyrim was one of the latest perpetrators of the cardinal sin in this of Norse representation—pulling a blanket of horned helmets, snow and beards over standard fare Tolkien-esque fantasy. “There were inspirations,” Andersson says, “but Skyrim has about as much to do with Norse mythology as a McDonalds advertisement has to do with Christian mythology.”

“We have read ‘Röde Orm,’ we have poured over the ‘Edda’ and we know the Hávamál,” Andersson says.

As someone bred on Swedish folklore from a lot of these same sources, I can not stress enough the degree to which Andersson says the right things. The “Edda” and the “Hávamál” are both original sources—one a prose collection of tales, one a poetic collection of advice on everyday Viking life. “Röde Orm” is known as “The Long Ships” in translation and is a formative piece of Swedish 20th-century fiction, but set in the tenth century.

Doing it the Scandinavian Way

Videogames are notoriously bad with national characteristics—most games seems to fit into either the American or the Japanese tradition, regardless of their origin—but as the medium matures and starts to cross-pollinate with the rest of popular culture, certain areas of the world are starting to carve out niches for themselves. Eastern Europe has become the place for grim, systemic shooters while Germany is stuck in the nineties with point-and-click adventures and simulations.

A picture is emerging of what it means for a game to be Swedish.

With games like Minecraft, Amnesia: The Dark Descent and Battlefield, a picture is emerging of what it means for a game to be Swedish. All three of these games in some way merge the love for intricate systems from Eastern Europe with a western sensibility for narratives—Amnesia uses its design to make the players find a dark corner and hide, trying their best to not see the monsters; a multiplayer match of Battlefield is tuned to recreate the most bombastic moments of Hollywood; and Minecraft uses simple rules of interaction and procedural generation to create a true sense of exploration and self-expression.

Paradox’s grand strategy games fit comfortably into this tradition—Crusader Kings II, for example, is a machine that spits out Game of Thrones-like narratives—and Runemaster will be no exception. Andersson spends a long time gushing over studios like Bethesda and Bioware, but he wishes to approach the genre in his own, decidedly Swedish way.

“When you replay games like this, you realize how sparse the decision-trees really are,” Andersson says. “We have our own design philosophy here, and we feel like we could do it better.”

The game that Andersson is trying to make is a 50+ hour RPG with enough procedural generation and branching lines that every playthrough will be unique. “What I want,” Andersson says, putting his finger in the air and tracing a squiggly line “is that this happens. Then you play again, and this time,” he says, drawing another line that weaves around the first, “this happens. So even though there is a start and an end point, it should branch enough and there should be enough quests and content that depend on one another that two playthroughs will be completely different.”

This is the core of Paradox’s design philosophy, their particular flavour of the Swedish videogame tradition—to make infinitely replayable games that reliably weave interesting narratives. I have played Paradox’s grand strategy games for countless hours, and they seem to defy me to tire of them, and while transporting that sense of eternal narrative from a map-based strategy game to a personal-scale RPG is difficult, Andersson is confident.

“We are going to have make a shit-ton of content,” he says, “Runemaster has the potential to be incredible—but maybe we will still be waiting for it to be released seven years from now.”

I meet with Boel Bermann, PR Manager at Paradox, after the interview, and, after giving me the official line that the game will be out this coming winter, she restated the goal of Runemaster very succinctly. “It’s been Johan’s dream to make a very Scandinavian game,” she said, “free from the influence of Hollywood.”