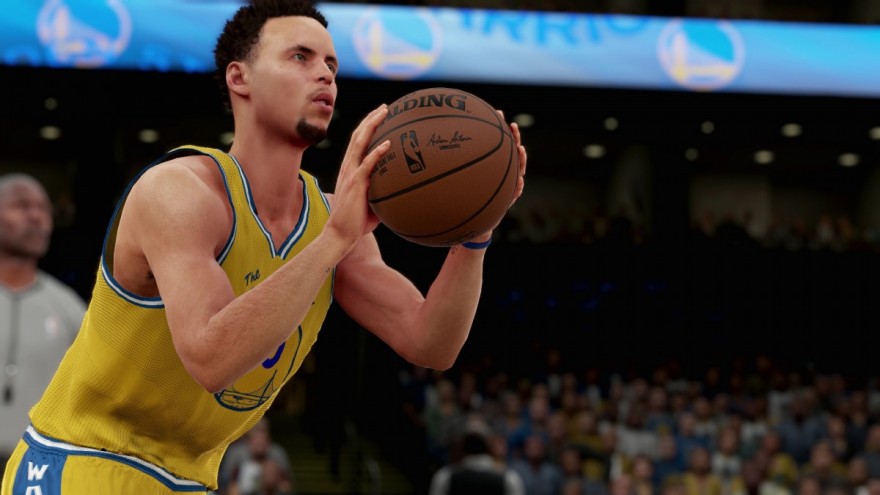 How do you solve a problem like basketball pro Stephen Curry—the guy breaking records for consistently scoring three-pointers? Note that the question here is not how to defend Curry. That’s a problem for other people, and we wish them the best of luck with that! But how do you write about a player with Curry’s peculiar skillset? Badly, for the most part. At some point over the last year, the phrase “it’s a cliché to call these video-game numbers” appeared on an NBC Sports page. Like primeval ooze, the phrase spread across NBC-affiliated sites, hidden in alt-text and metadata. Though you can’t read that precise phrase in a single article, it appears in thousands of results. Like Stephen Curry, the line of text has achieved a strangely mechanical form of sentience.

The videogame numbers meme is silly (we shall return to that shortly) but it is in the news again because NBA 2K gameplay director Mike Wang recently gave an interview to Forbes in which he said that the reigning MVP’s recent performances cannot be fitted in the game’s model of how basketball works. Curry has not really broken the game, as has been widely been reported. If you pick up a copy of NBA 2K this afternoon, it will still be fully functional. A functional game, however, cannot imagine three-point prowess as is currently being seen in the bay area. (At the time of writing, Curry had just set an NBA record by hitting a three point shot in the 128th consecutive game.) The game, in other words, is broken in the same way a crisp crossover is said to break a defender’s ankles.

None of this is particularly new. Wang concedes as much. Games have always struggled to achieve a reasonable balance between rewarding long- and short-range shots. All things being equal, a game in which three-point shots have a high success rate—higher than the NBA average, say—will see those shots come to dominate offensive strategies. There’s even a desultory term for this: cheesing. Humans react to incentives, and over time those incentives can push gameplay farther and farther away from the league it seeks to emulate. Rocket League (2015) notwithstanding, this is normally addressed through algorithmic course corrections until balance in the force is restored.

The challenges of managing a sports game are not, however, particularly distinct from those of managing an actual sport. In behavioural terms, cheesing in NBA 2K16 is not meaningfully different from the probabilistic offensive strategy espoused by teams like the Houston Rockets. The strategies vary, but the underlying logic is the same. Rules are created to discourage and encourage certain behaviours, and players react accordingly. The three-point shot, as a recent episode of 99% Invisible expertly covered, was a design solution to the rise of dunking. The three-point arc rewarded smaller (and, if we’re being honest, whiter) players. There was now an incentive to shoot from 22 feet, though no meaningful reward for shooting from further away.

For the most part, he is still shooting worse when he’s farther away. You can beat other humans, but you can’t beat science. (I think.) But relative to the league, as well as to his own recent history, his distance curve this season is incredibly flat: He’s shooting 43 percent on shots taken 26 to 28 feet from the basket and 42 percent on shots from 28 to 42 feet. (The 42 feet corresponds roughly to half-court, though most of his shots are much closer to the bottom of that range.) Not only is this not normal for Curry, it’s nowhere close to the norm for anyone, even other great 3-point shooters.

You can’t exactly blame 2K Sports (or the NBA, for that matter) for not having seen this one coming. If you were to model the game of basketball, distance would probably be a pretty big factor in determining which shots go in. Stephen Curry’s game is obviously hard to model because of his specific skills—all athletes are outliers, but he is an outlier on multiple levels—but that’s not the whole story. Widely held conceptions of how basketball works—not just 2K Sports’—have failed to account for Stephen Curry’s long-range prowess. That is not to say defenses will simply figure Curry out, but there is a clear imbalance at present.

And this is not just a Stephen Curry story. In December, an 11-year-old named Jaden Newman scored 59 points in a game. She took her shots from closer to the halfway line than the three-point line. One after the next, they kept going in, and each time opposing defenders did not come out to the halfway line. They, like NBA 2K16, could not compute:

In response to the rise of Curry and the distance shooter, San Antonio Spurs coach Gregg Poppovich reiterated his opposition to the three-point shot: “I’ll never embrace it. I don’t think it’s basketball. I think it’s kind of like a circus sort of thing. Why don’t we have a 5-point shot? A 7-point shot? You know, where does it stop, that sort of thing.” As a design proposition, the five-point shot would provide a reward for shooting from, say, 30 feet. The catch, however, is that such a reward already exists—at least for Stephen Curry. Insofar as nobody seems to know what to do about Curry (and, again, can you blame them?) there is far less of a disincentive for him to shoot from well behind the arc.

Watching the video of Jaden Newman, however, one can already see a course correction in the works. It is not one where one of Curry’s big skills is devalued, but rather it is a future in which his skills and approach to the game are increasingly normalized. Kids who grow up on a steady diet of Curry highlights are likely to have radically different ideas of what is and is not possible in basketball. And just as audiences adapt to changes in basketball, so too do videogame models. Wang told Forbes that 2K is making tweaks to better replicate the Curry experience. That is not a broken game; that is the system at work.


The “videogame numbers” meme has always had tenuous relationship with logic and numbers. If an NBA player scores fifty points, he is an outlier in the context of any given season, if not basketball as a whole. Though sports media may give the impression of wall-to-wall action, there are relatively few NBA games to go around. A videogame avatar who scores fifty, on the other hand, is not a rarity in the same way. The most popular of sports titles simulate thousands of lifetimes of action per week. Like all-star games, they also emphasize certain skills at the expense of others. (Here’s looking at you, Kobe Bryant.) Of course these events occur more frequently in games. Calling a real-life achievement a videogame number, then, is just another way of branding it an outlier.

Stephen Curry is not putting up “videogame numbers”. The reason for this is not, however, that ESPN-commissioned simulations in NBA 2K fail to reproduce his scoring output. Rather, it is that the idea of a videogame number cannot include paradigmatic shifts. Strange, borderline-unbelievable things can happen in videogames with surprising frequency, but they are each one-offs. The Stephen Curry experience, as this long-suffering Cavaliers fan can attest, is repeated night after night after night. It is not a collection of oddities in the way one thinks of the “videogame number,” but a continuous performance. That’s where models break down. Game models, like NBA 2K’s are inherently reactive; they cannot be one step ahead of the sport and also promise to reproduce the product sold at stadiums and on TV most nights. Thus, to the extent that Stephen Curry can be said to have broken NBA 2K16, he must also be given credit for breaking the game design of NBA basketball.