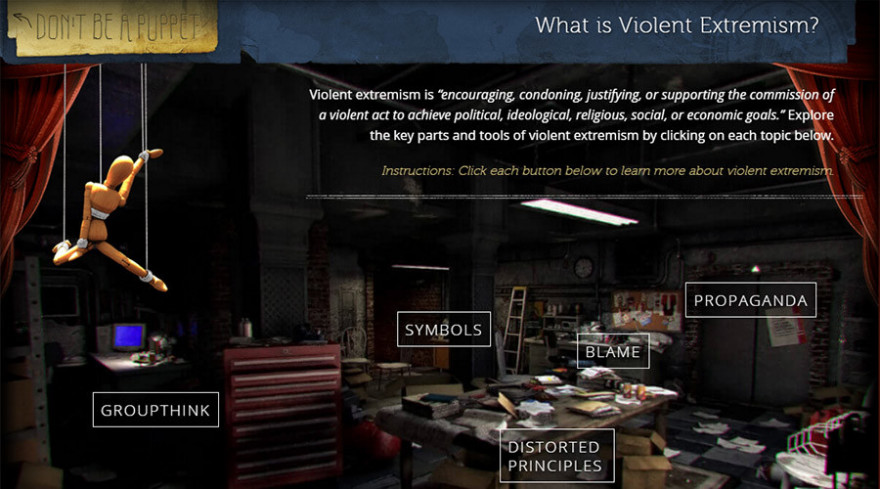 Don’t be a puppet. That’s the FBI’s new mantra in response to terrorists and their would-be recruits. And in light of the growing problem of terrorists trying to recruit vulnerable teenagers over the internet, the FBI has created an interactive website, adorned with a flailing wooden puppet on strings, to teach teens how to spot terrorist recruiters and better protect themselves from their brainwashing and manipulation.

The message is of course commendable, and there is nothing wrong with telling teens to speak their minds and use their intelligence. To ignore the potential dangers of the internet, in light of lurking terrorist recruiters, would be in many ways naive.

The inundation of American flags feels a bit absurd

However, the question remains whether an interactive website set in a creepy cement basement (a fallout shelter, perhaps?) is the most effective way to engage teenagers on this serious, heavy anti-recruitment message. The website background features American propaganda posters lining caged walls, thick red text that screams commands like “don’t forget the enemy” above a solemn bald eagle. The inundation of American flags feels a bit absurd, creating a near-Jingoistic mood that feels inappropriate against the website’s alleged goal of educating how to defend oneself against recruitment.

At least the website is not without some light-hearted fun: there are interactive tests and even games. One “matching” game asks the player to “click, drag, and drop each type of violent extremist above to its corresponding distorted belief on the right.” Perhaps in using the lighthearted medium of childhood “matching” games, the FBI seeks to empower teens in an attempt to give them agency through a means that feels comfortable, natural. The ultimate goal after successful completion of the matching games is to “free the puppet,” further symbolic of the FBI’s intent of freeing teens from the bonds of brainwashing, and it’s certainly satisfying to do so in the game. But it doesn’t change the fact that the disconnect between the type of medium and the message behind it is unsettling.

Now, it may not always be the case that such games are inherently inadequate or inappropriate for the education of teens and others about serious political and human rights issues like terrorism. After all, childhood “matching” games are accessible, valid teaching methods. Just tone down the eagles and other forceful, unnecessary propaganda, FBI. Otherwise, it looks less like you’re trying to teach teens how to defend themselves and more like you’re, um, trying to recruit them.

You can play Don’t Be A Puppet in your browser.