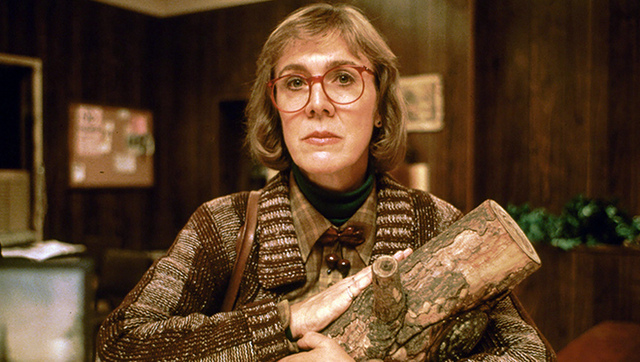 Cherry pie and coffee. You could place that order at any diner in America, but one is special: the Mar-T Café of North Bend, Washington, which became the Double R Diner, a centerpiece of the early nineties television show Twin Peaks.

Viewers of the show fondly remember the food, but they associate it more with the hands that made it: characters like the sweet Norma Jennings and fiery Shelly Johnson – or the angelic Annie Blackburn. They’re the kind of people you’d expect to find in a small town diner, like director David Lynch did when he visited the Mar-T Café during location scouting.

“Peggy, I think her name was — used to make, like, maybe only six pies a day when we first got there, if that,” Lynch said in the book Lynch on Lynch. “After Twin Peaks she was making sixty pies a day! Buses were pulling up in front of the place, filled with Germans or Japanese, people from all over the world, going into the diner and having cherry pie and coffee. That place is on the map, you know, forever.” He harbors similar memories about the nearby sawmill, a focal point of local business in the show. Its real-life “log lady,” named for the quirky character, was the highest paid person there.

Twin Peaks may have left the airwaves more than two decades ago, but it’s found its companion an unlikely place. North Bend bears an uncanny resemblance to the strange folk and atmosphere of the A & G diner in Hidetaka “Swery” Suehiro’s hit survival-horror video game, Deadly Premonition. Both are popular for their colorful glimpses into ordinary rural life, but Lynch understood what made that magic happen. He visualized the fictional setting first.

A small, humble department of police officers; polite residents at town meetings who know each other by first name; and a few troublemakers on the outskirts.

Colorful identities and ordinary lives made Twin Peaks popular, but Lynch would never have discovered them without first creating his fictional town in his mind. “We had drawn a map of the town,” he said. “We knew where everything was located, and that helped us determine the prevailing atmosphere and what might happen there.”

In 2010, Swery followed that blueprint with the virtual town Greenvale in Deadly Premonition, which is returning as a Director’s Cut for PlayStation 3 this week.

The two share many basic locations and character types: a small, humble department of police officers; polite residents at town meetings who know each other by first name; and a few troublemakers on the outskirts. Swery and Lynch introduce an FBI agent who disrupts the normal routine, and both towns suffer an “evil in these woods” that triggers a series of grisly murders.

They’re similar in other ways, too, but Swery has denied that he was “especially influenced by any single work.” His creative vision does play out differently, but his and Lynch’s technique seem to be one in the same. They think alike.

“I created and developed the country town of Greenvale first,” Swery told me. “I found this to be the most important point to creating an open-world mystery game like Deadly Premonition. After the general layout of the town was created, I then decided on where to place the shops, restaurants, houses, and other structures one might see in a small country town.

“As you start peopling the place, one thing leads to another.”

“It was after designing Greenvale that I decided it was time to breathe some life into the town by populating it with unique and interesting characters. I provided each of these characters with backstories and daily routines that would make life in Greenvale feel believable to the player. Once their routines were set, the inhabitants started acting very naturally. Oddly enough, all of the characters were born from actual experiences from my life.”

Lynch admitted he saw the town as its own “character” – “a place surrounded by woods,” which “for as long as I can remember … have been mysterious places.” He continued, “And then other characters came to our minds. And as you start peopling the place, one thing leads to another. … And because of the way the characters are, you have indications of what they might do, and how they could get into trouble and how their past could come back to haunt them.”

The characters of Deadly Premonition are very much the product of their small town America upbringing of good morals and manners. That’s what a slice of pie and a damn fine cup of coffee represent. We form expectations of them before we meet them.

Lynch and Swery establish those stereotypes and break them, making the characters more real and believable. The people of Twin Peaks and Greenvale lead double lives, and their actions betray their old-fashioned values and ideals. In Deadly Premonition, not even the good guys are good. That conflict creates a richer drama.

These towns operate by their own rules.

Even so, they defend their roots. The antagonists in each work blame two specific characters for introducing “sin” to their pure towns, and they turn to murder and sexual violence as ways to stop the infection they’re responsible for spreading.

That evil manifests physically – an “inside/outside thing,” said Lynch. That’s how it can rain indoors in Twin Peaks, and it explains why malicious creatures appear on rainy nights in Greenvale.

These towns operate by their own rules. “It’s where you’d want to go at 10 at night to just float and see what was gonna happen,” Lynch told the Los Angeles Times. Swery took that to heart when he put Deadly Premonition on a day-night cycle and timed different occurrences on an hourly schedule. Players are free to discover.

The town sets the mood, writes the script, and births the characters. In its architecture are great secrets and answers — all you have to do is look closer.