Though virtual reality can be an immersive, solitary experience, multiplayer games are bringing people together for a new kind of group fun. With all the enthusiasm and excitement surrounding virtual reality (VR) games this year, it makes sense to expect some partying. After all, huddling around the TV with a group of friends to play Mario Party—or transforming the living room into a makeshift concert hall with Rock Band—remain marquee gaming moments for gamer groups.

Yet these types of party games seem to fly in the face of the head-mounted displays of VR, which appear to isolate players in immersive yet solitary experiences. Inviting the gang over to goof around and play games seems almost contrarian to the very concept of VR as a means of transporting the sole user to far-off digital worlds. But VR knows how to have a good time, too. In fact, some of the most promising VR games could be as fun as epic Guitar Hero group battles on beer-and-pizza night.

VR is fertile ground for positive social experiences with real-life family and non-Internet friends, according to Intel’s VR Evangelist, Kim Pallister. “There will be people doing things that are social in the Nintendo sense of the word, in which you are in the same room or sitting on the same couch,” Pallister said. “I’m very confident that lots of indie developers will think of interesting twists to that scenario.”

Some already have. Fantastic Contraption, a launch title for HTC Vive, tasks players with going under the mask to construct whimsical virtual machines while their friends jeer and cheer for them. The game gives players the impression that they’re performers entertaining an audience—an experience that’s a cross between a game of charades and a French mime. Sony’s eye-popping mini-game Monster Escape takes an alternative approach. Here, it’s four against one, with colorful little robots taking on a single yellow, squeaky, VR-outfitted dinosaur.

Still, the best of the bunch may be the 2016 Independent Game Festival Grand Prize finalist Keep Talking and Nobody Explodes. This one requires people outside the VR headset to relay instructions to a person who is inside VR trying to defuse a bomb. The game essentially casts players as the star and co-stars of their own James Bond film.

Actually, Brian Fetter, one of three developers at Steel Crate Games, explained that the team was inspired by an episode of the master spy spoof animated series Archer. In the episode, the titular and notoriously bumbling hero is on a blimp trying to defuse a bomb but has a communication breakdown with headquarters. “It’s M as in Mancy,” Archer blunders before making the ticking time bomb speed faster toward detonation. “That’s what we wanted to go for,” Fetter said. 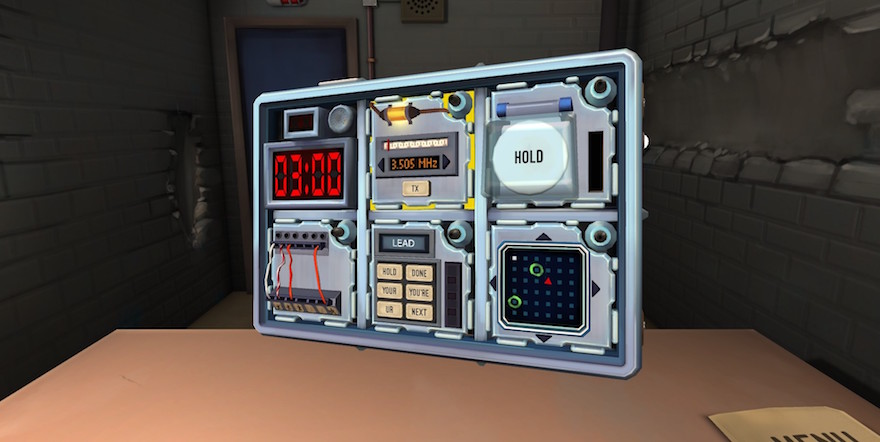 Aside from living out the fantasy of being an international super spy, the purpose of the multiplayer in Keep Talking and Nobody Explodes is to get everyone in on VR fun. “It’s not likely there are going to be five headsets at a party, so we started thinking about how we could make a game that only involved one,” Fetter said. The team first encountered this design obstacle for multiplayer VR experiences at the 2014 Global Game Jam (which asks designers to create a game in only 48 hours). It turned out they were one of the only groups who brought an Oculus Rift development kit to the jam.

Because there weren’t many kits in circulation at all back then, the other programmers and game jammers were antsy to take it for a spin. This prompted Fetter and his team to share the experience by setting up a kiosk for others to use. Before they knew it, a line had formed. They thought, “Wouldn’t it be cool to have everyone involved in some way instead of waiting?” Before they could say “virtual reality party,” Nobody Explodes was born.

get everyone in on VR fun

They discovered that this evolution of the digital party game had the unintended benefit of making people who were totally uninterested in VR suddenly very curious. “We didn’t design it as an introductory game to VR,” Fetter said, “Later on, we saw it as a gateway.” The design of Nobody Explodes invites those who might feel intimidated by the newness of VR to play as the assistants who communicate the instructions to the bomb defuser. After seeing how much fun the plugged-in player can have, their uncertainties quickly wash away. Without even realizing, naysayers catch the VR bug themselves.

Titles like Nobody Explodes and Fantastic Contraption don’t just give a sneak peek of an evolution in game nights. Aside from getting friends together, the game also acts as a bridge for those who want to explore VR while keeping one foot firmly in the physical world. Light multiplayer games like that might be exactly what VR needs in order to woo early adopters. As Pallister explained, one of the big challenges is getting around “this awkward head-mounted display thing.”

“You can’t put it in a commercial,” he continued. “You can’t show a screenshot. If you really want to see [what it’s like], you have to put it on your head.” Luckily, after one person gets in on the fun by wearing the headset, it’ll be hard for the others to resist a party.